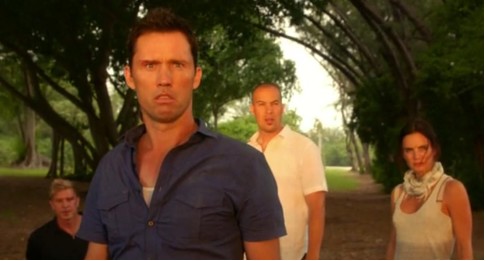 Going into their summer mid-season finale, Burn Notice had good momentum. Still coming off the shocking death of Michael’s brother Nate and the hunt to find his killer, our heroes took their eye off the ball and were unaware they were being set up. The man doing the set up might have possible ties with the people who put out the Burn Notice on Michael but how much of a connection is unknown at this time. Michael had become so obsessed with finding his brother’s killer that it almost cost him and his friends their lives. The summer finale ended with Michael and company stranded in Central America, on their own and with a new enemy that will go to great lengths to kill them. It made for a stunning summer finale, leaving fans wanting more. A lot more.

When Nate died, the direction of the show changed radically. Michael became obsessed with finding the man who pulled the trigger and didn’t care what he did and who he worked with to get the answers he wanted. You could tell the closer Michael got to the man who pulled the trigger, the bigger the risk he was willing to take to get his man. Westin didn’t listen to people who asked him to slow down and not work with certain people and he refused as he was desperate to get closer to his objective.

This led Westin to work with the one person who he should have never considered doing business with: his old training officer and mentor in the CIA, Tom Card. He seemed to have more going on than we or Michael ever suspected. When Card offered Michael and his people permission to go to Panama and take out the man who allegedly killed his brother, it seemed and was too good to be true. Card was offering the world to Michael and not asking for anything in return, and that should have been a red flag to the burned spy. Instead, Michael was too preoccupied with vengeance to learn Card’s true intentions: he wanted Michael and his people dead.

With the conclusion of the Anson storyline, someone had to fill in as the bad man behind the curtain… and now it’s Michael’s mentor within the CIA. It’s fairly obvious that he was the man responsible for sending the trigger man to shoot Anson, which also resulted in Nate’s death too. I can’t help but wonder why Card wanted Anson dead. Was he afraid that information about his work would embarrass the agency, or was he afraid the Anson would rat him out as an accomplice? It’s a question I’m sure Westin is going to ask Card in the second half of the season and I’m curious to see where they are going to take this storyline. Will Westin still be in good with the CIA or will he get burned again, this time permanently?

Trapped in Central America with zero support and assumed dead after a failed air strike, Michael along with Fiona, Sam and Jesse are stranded in Panama with no support or way out. I’m sure once they sneak out of the country and back into the US, Michael is bound to hunt Card down and look for answers. Whether or not Michael has ‘burned’ his bridges with the CIA again remains to be seen.

The wait to see what happens next isn’t going to be that long. The second half of the season returns in November on USA Network, or Superchannel for those watching in Canada. That’s only two months away, we can handle it! In the meantime, tell us what you think about the summer finale. Leave a note and tell us where what direction Burn Notice will take when it returns in the winter.