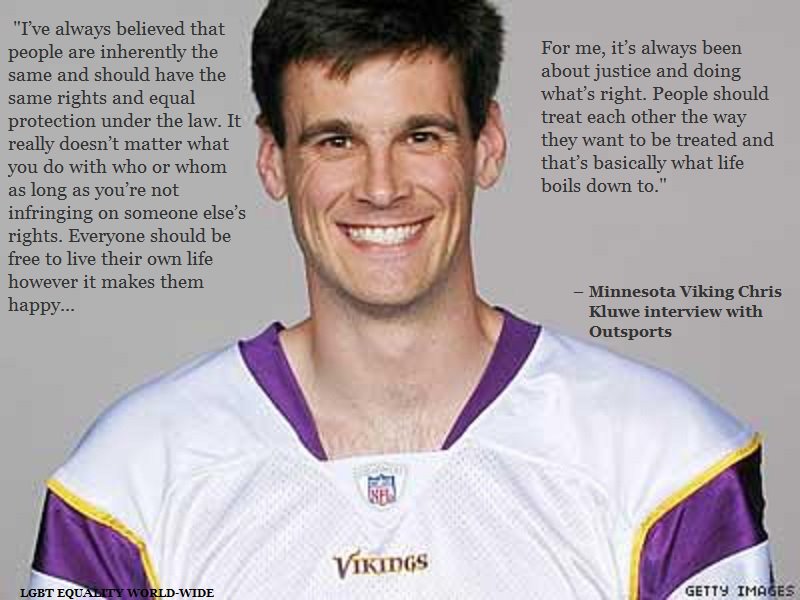 SportsSuperstar of the Week: Chris Kluwe

My Facebook Newsfeed has been blowing up with this link over the past few hours. Everyone from my high school English teacher to twentysomething politicos to sheltered theatre geeks are jumping on the Chris Kluwe bandwagon; and for good reason.

Okay, backstory: Brendon Ayanbadejo (linebacker, Baltimore Ravens) comes out in favour of legalizing gay marriage. Emmett C. Burns Jr. (state delegate, Maryland) writes a letter to the Ravens higher-ups being all ‘that’s not a popular stance; make him shut up and play football!’ about it. Chris Kluwe (punter, Minnesota Vikings) is not impressed.

Now, normally our Sports Superstar of the Week is someone who does something, you know, sports-related. Meaning someone like Derek Jeter when he hit 3000 or Rory McIlroy after his first major win. But sometimes (like this time), it’s someone who is just a superstar, who also happens to play a sport. Chris Kluwe is a smart, brave, funny, surprising, and Right person, and I have no idea if he’s any good at actually punting a football, nor do I care. See, what Kluwe did in response to the aforementioned idiocy was write a letter (a strategically publishable letter) to Mr. Emmett C. Burns Jr. outlining the many ways in which he is wrong (to be against the legalization of gay marriage) and was wrong (to try and shut up those who are not). Kluwe’s letter is smartly full of damning facts and impressively full of eloquence beyond the abilities of any athlete I’ve ever heard (and there are some Smart ones- did you know Carlos Villanueva is a would-be engineer And plays the piano?).

But here’s where I get a little conflicted. Kluwe’s letter is also dripping with disdain and flippancy (let alone crass language), and that is Not the way to go about changing a mind. However, I don’t think Kluwe had any intention of changing Burns’ mind. I think he just wanted to shame him. And shame him he did. See, despite the sort of contradictory shock of an NFL player standing vehemently up for gay marriage (football’s a conservative American tradition, notably prevalent in the south, and generally populated with/worshiped by macho men who adhere to a strict hetero gender code), there’s no way Kluwe’s letter would have generated the buzz it has were it not Hilarious. Shocking, a little inflammatory, and Hilarious. I both understand and appreciate the urge to yell “How Are You People Still So Stupid About This Issue?!”, and while I don’t think it gives your point of view all that much weight in a head-to-head argument, it does do things like make links go viral.  Kluwe’s letter will likely never reach the people it’s addressed to (as represented by Mr. Burns) because of its tone. What it might do, however, is mobilize the people who already agree with Kluwe and maybe inspire them (especially the high profile ones or, specifically, the macho athlete ones afraid of having a point of view) to speak up too. Though it’s not likely to change the mind of Emmett C. Burns Jr. or anyone else on the wrong side of human rights, Chris Kluwe’s letter might get the right people to stand up and and start to drown out the voices telling them to not speak their minds.