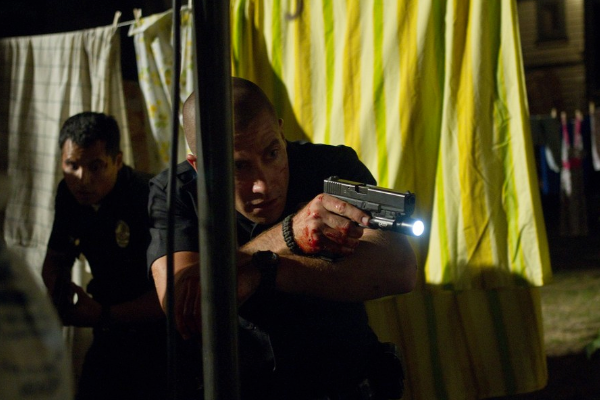 With found footage movies on life support, writer and director David Ayer hopes to reanimate the genre with his first-person buddy cop action film, End of Watch. Having written Training Day, Mr. Ayer certainly had the street credentials for the job, but his flashy and ornate homage to the television show Cops, the original forbearer of found footage, never rises above the call of duty.

In South Central Los Angeles, officers Taylor and Zavala (Jake Gyllenhaal and Michael Peña) are the poster boys of the LAPD. Armed with guns, tear gas, and a personal HD camera, the two clean up the portentous streets of the city with verve and bravado, until their over-enthused attention for justice puts them in the crosshairs of a drug cartel.

In directing End of Watch, Mr. Ayer spends a disproportionate amount of time on character development over narrative. In trying to portray his leads as immaculate heroes, often in valiant episodes, the main narrative thread is dropped and forgotten for long stretches of time. The characters are nicely written and believable as real friends, but the story stagnates for too long to be fully effective.

The handheld aspect of the movie is purely a gimmick and isn’t always implemented, especially when there are aerial shots of LA, making the decision to do so perplexing. There are a few times when End of Watch hits you with high-velocity rounds of action, but the maelstroms are too intermittent to leave any serious mark.