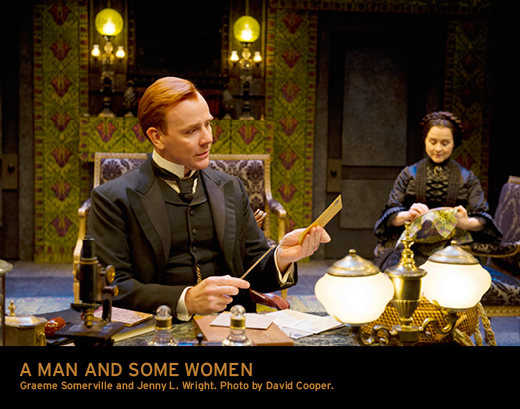 At the Shaw: A Man and Some Women

It takes ages for A Man and Some Women to get going. I was sure it was the worst thing I’d seen in a long time- what with its affected accents, stiff corsets, slow pace and lack of energy- but the further into the play I got the more I started to like it. By the end I was quite tickled by the character-study-via-romantic-hijinks story.

The script was written by a woman named Githa Sowerby back when women did not write plays. Never impressed by the First person to do something over the Best person to do something, I didn’t much care about this fact and worried that the whole thing would be an admiring lecture of “look, an early 20th century woman had basic writing skills!”. It’s not. Thank god. Sowerby’s play is actually good, and not just good in a “good for the time and from the ‘lesser sex'” way, but in an actual “good on the grand scale of playwrights” kind of way. Her characters reflect a broad range of who human beings can be within a singular social construct and her themes (and even some of her dialogue) are universal enough that the play could be set in modern day with very few changes. Director Alisa Palmer does Sowerby’s text few favours with unforgivably stiff direction and an interpretation so unoriginal I wouldn’t call it interpretation. Some of the cast, however, brings the heart of the story forward through the directorial fog.

The weakest is Jenny L Wright as the money-grabbing wife of Richard Shannon (the titular lone man). She’s cold and selfish and Wright leaves her that way without a hint of humanization. I understand that if you’re written as an antagonist it’s hard to make yourself a hero but I think in a play where everyone else has at least some grey Hilda deserved a little more thought. Wright also speaks hopelessly slowly, which is simply aggravating. In fact, all the women in that first scene are too slow and lack energy. It drrrraaaaags and sometimes even comes to a full stop. The one saving grace early on is Kate Hennig who is a cranky smartass gossip (aka Richard’s eldest sister Rose), and it’s awesome. Rose causes lots of problems and is an obnoxious, vengeful stick in the mud, but she’s 1) amusing and 2) understandable in motivation. The other sister is Elizabeth, played by Sharry Flett. I didn’t like her at first because she matches Wright’s energy in the play’s first act instead of Hennig’s, but she very quickly grew on me late as Flett brings out more and more of Elizabeth’s own thoughts and feelings, including her reluctance to show them fully.

The easiest woman to love is obviously Jessica, the one woman who is not a Shannon. She’s not the most fleshed-out, being so kindly heroic much of the time, but she’s tough and guarded and loves Richard in that awesomely real-meets-romantic way where she cares most for his happiness even if it means he can’t be with her. Marla McLean shines in the role starting about halfway through the first act (really, that first bit is just dreadful across the board) and she gets better from there. She’s warm and lovely but also more than a fierce match for the not-so-warm and not-so-lovely Rose.

The object of Jessica’s affection is refreshingly deserving of said affection. Richard is kind and soft-spoken and sad, though not as sad as he could be considering how intensely put-upon he is by his wife and sisters (he’s also returning from his mother’s funeral, which is not nothing). As played with great tenderness by Graeme Somerville, Richard is an intensely good man, if not a perfect man, and everything from his wanderlust to his parenting ambitions to his ingrained resentment and occasional burst of temper seems to fit together into a complexly drawn whole person. I’m now a little bit in love with Somerville and the dependable, thoughtful, well-meaning way he plays Richard. The strength of his performance is what grounds the entire play and contextualizes the varied women who steal his thunder (and, in some ways, his money. And soul).

What’s most interesting about Sowerby’s text is her incredible insight into people of different sorts. Her women are all so different but all so real (or at least could be real if played well) but in examining the highs and lows of feminine traits the playwright never abandons her interest in her male protagonist either. Richard is every bit as interesting as Rose, Elizabeth, Hilda and Jessica without overshadowing them. The central plot is a small, personal one about the ways we use and manipulate and avoid each other. Jessica and Richard’s carefully danced-around relationship is constructed with heartbreaking honesty and impressive elegance then played by McLean and Somerville with lovely understated chemistry and awkward ease (if that makes sense- they’re endlessly comfortable if they stay exactly within their usual dynamic, but one step out of sync and they freeze up until absolutely everything’s on the table).

Even as recently as partway into act one I never would have thought I’d really like A Man and Some Women, but I completely did, mostly because of the complicated lovability of Graeme Somerville.

A Man and Some Women plays at the Shaw Festival Court House Theatre until September 22nd.