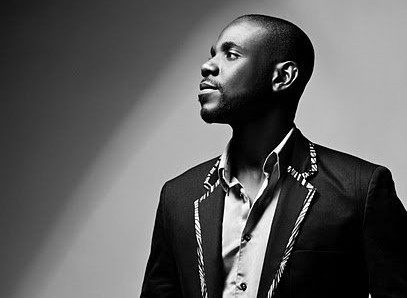 Omar Thomas Large Ensemble took the stage at Berklee Performance Center on July 25th to a packed house. This was Thomas’s second concert at BPC with his 18 piece jazz ensemble since becoming a faculty member at Berklee College of Music in 2008 at the age of 23- making him one of the youngest professors ever hired by Berklee, right behind Pat Metheny and Esperanza Spalding. Thomas’s demeanor was warm and his sense of humor showed a humility that was genuine and down to earth. With support from his ensemble, who delivered a performance of pure talent and incredible musicianship, Thomas’s lively and hopeful compositions brought the audience into his inspiring world.

As a conductor, Thomas was highly magnetic which instilled euphoria and confidence within the audience. It was astounding to watch him project so much energy and pour so much power from his ensemble basking the audience in harmony and positivity. After each piece he needed a moment to catch his breath, because his movements while conducting were as vigorous as the performances by the musicians.

Thomas introduced each piece with a story describing how the composition developed and acknowledged the people who inspired it. Pat Metheny, Christian Siriano from season four of Project Runway, Harvey Milk, Dan Savage, Barack Obama and several of his past professors were mentioned in tribute. This made the performances more relatable and heartfelt.

A cover of Pat Metheny’s “Episode D’azur” showed off Thomas’s transcribing talent. Musically, the piece was something he had never transcribed before. In his introduction, Thomas stated how difficult it was to finish, because it was foreign to his musical language. Some parts flowed through his ears and out onto paper effortlessly, but certain sections required extensive listening. His efforts proved to be worth the trouble. The cover beautifully showcased the fast and solid accuracy of drummer Casey Scheuerell and was filled with ascending and descending melodies that pushed the listener into g-force status. Guitarist, Mark Cocheo, gave the audience a superb solo with lightning speed precision that made your fingers feel all in a twist. Hopefully Pat Metheny will have a chance to listen to this version. I’m sure any recognition would be a dream come true.

“A Touch of Obsidian, A Flash of Scarlet”, dedicated to designer Christian Siriano, awed the crowd with its sweeping dynamics laden with grandiose solos from pianist, Tom Hojnacki, and saxophonist, Mark Zaleski. It instilled the desire to achieve one’s dreams and push through rough times when the soul is screaming for success. Blazing scales and massive chord progressions would decrescendo into delicate phrases and pensive moments where the drummer and pianist fed off each other creating melodic rhythms highlighting guest vocalist, Tavonna Miller, whose intense performance sent the listener on a roller-coaster ride of emotions combining soft, sensual tones with belting notes giving respect to individuals like Siriano’s bigger than life ideas and strong personas.

An important topic of the night was Thomas’s overwhelming support for LGBTQ rights, which was mutually shared by the audience who graciously cheered him for expressing his desire to build an equal world. Harvey Milk- the first openly gay man to be elected to public office in California- was credited as a source of inspiration for Thomas’s ability to reach out and- through music- create hope and peace for people who face prejudice and scrutiny. Also, he dedicated a four part composition entitled “We Will Know” to Dan Savage’s ‘It Gets Better’ project where the ensemble played the first 3 sections, “Hymn”, “In Memoriam” and “Meditation” consecutively, leaving the fourth movement “May 9, 2012” for an emotionally uplifting encore. His reason for writing “We Will Know” was simple, but sincere; he wanted to contribute to Savage’s project but couldn’t express himself in the normal ‘It Gets Better’ fashion- which normally entails filming a short, hopeful speech that ends up on the project’s YouTube channel- so he did what he does best and composed a large ensemble anthem.

On a side note, Thomas’s “Hymn” was selected to be included in the San Francisco Gay Men’s Chorus commemoration for Harvey Milk. The show will be held sometime in June 2013, marking the 35th anniversary of Milk’s assassination.

To end the night Omar presented “May 9, 2012” honoring the day President Barack Obama came out in support of same-sex marriage. The piece was a spectacle, capturing the momentum of a community that has met many victories through persistence and courage. At one point the ensemble softly harmonized the slogan ‘we shall overcome’ over guest vocalist Nedelka Prescod’s soulful vamping, creating a unity that brought the audience to a standing ovation. It was a heartening finish to a thought provoking and inspiring concert.

Omar Thomas Large Ensemble is something to keep an ear out for. The optimistic arrangements and powerful messages will no doubt become a staple for all who crave the beautiful complexities of big band jazz with an emotional backing that serves to motivate and inspire.

Currently in the works is the ensemble’s debut album I Am which is in the mixing process and will hopefully be finished by the end of this year. You can find more information on Omar Thomas and his Large Ensemble at http://www.omarthomasmusic.com/