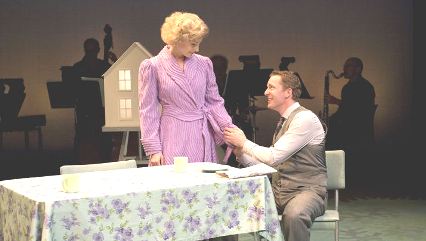 At the Shaw: Trouble in Tahiti

When Leonard Bernstein’s one-act opera about a crumbling marriage in the 1950s suburbs premiered in 1952, I imagine it was pretty subversive and revealing. The idea of something so flawed yet so seemingly perfect is a fascinating, dark and specifically suburban concept that would have played as insightful and daring back when the suburbs were merely a few years old. But in 2012 the concept is a little less exhilarating. That theme is the centerpiece of American Beauty, Revolutionary Road, Far From Heaven, Suburgatory and even gets lots of play in the early seasons of Mad Men. The story’s been told using robots (Stepford Wives), tragic incomplete dudes (Edward Scissorhands), and even a pair of teenagers who enter their television (Pleasantville).

It’s somewhat over-done at this point, so Trouble in Tahiti has to have something else to make it interesting. It doesn’t really.

I love Mark Uhre, but the score is a little low for his lovely tenor. He’s still greatly likable (at his best in Sam’s few tender moments, like the gorgeous opening bit choreographed by Linda Garneau) but isn’t as standout as I’m used to. His wife is played by Elodie Gilllett whose delicate soprano struggles when she goes for broke but is magnificent (and so beautifully controlled) when dreamily sweet like in the production’s best song: “There is a Garden”- Gorgeous.

Director Jay Turvey stages the production excellently on Michael Gianfrancesco’s clever set, and a great chorus of Ragtime extras fills the space between Sam and Dinah beautifully. There’s a lot of story filler for such a short piece (since Bernstein doesn’t really have a plot other than “these people are not happy”) but the real problem comes down to music. I was excited to see a Bernstein musical (especially the only one for which he served as lyricist) but Trouble in Tahiti, it turns out, barely carries a hint of the Bernstein genius we know so well from West Side Story (easily one of the most phenomenal musical scores ever written). There are a few straight musical echoes, but nothing of the delicate and surprising beauty apart from the admittedly wonderful “There is a Garden” (which centers on an unexpected chord progression just as lovely if not as startling as “Maria”). Ultimately, Trouble in Tahiti is nothing special where 60 years ago it might have been.