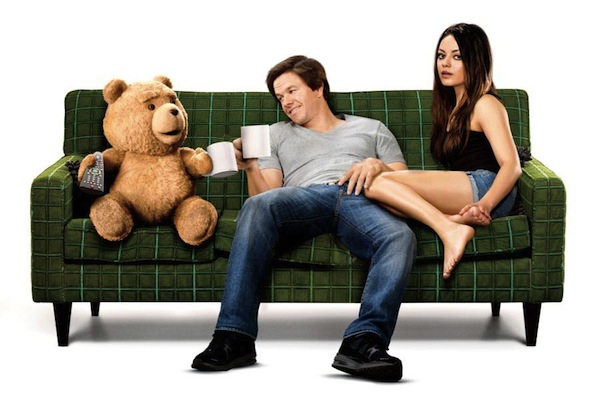 Ted; or how I learned to shut my brain off and laugh

While this seems like the ultimate “White Whine,” sometimes watching and reviewing films can be difficult.  Sure there are days when the movies sucks or they’re spectacular, or you had a friend who worked on them so you’re biased, but those feelings all have reconcilable ends.  Ted is different.  Ted left me . . . well . . . emotionally confused.

Ted (Written and Directed by Seth MacFarlane), has a simple plot, an almost non-existent storyline, characters acting much younger than they are, misogynistic takes on love, relationships, sex, and an amoral definition of friendship.  It is cliché to a fault, has unnecessarily long establishing shots of Boston as if it were paid for by Massachusetts to raise tourism, and enough cringe-worthy 9/11 jokes to make even the most liberal viewer uncomfortable*.

You see, Ted is exactly what it’s made out to be.  It’s a raunchy Teddy Bear comedy full of non-sequitur punch lines, cameos, and rampant drug use.  It hits the spot, usually the funny bone, at all the right places and encourages the audience to turn their brains off and have fun.  It is the equivalent of a filmic bong hit.

I want to call Ted out for being debased, for treating its leading ladies with roles that are so poorly defined they could just be a pair of breasts acting, and for having the world’s weakest plot . . . but I can’t.  I can’t because if we define a film by what the filmmaker set out to do then Ted is a masterpiece.  I’m quite sure it’s exactly what MacFarlane had in mind, so therefore it has to be a success.

We get caught up in reading subtext so often that it’s almost refreshing to see a film that wears its heart (made of stone) on its sleeve.  Ted works the same way a doughnut or French fries satisfy- sometimes you just want the worst thing for you.  Sometimes you crave it.  Ted quenches those desires and for that reason alone, it’s worth all ninety minutes.

*Editor’s Note: a joke-choice made all the more fascinating by MacFarlane’s famous/bizarre/scary connection to the events of 9/11.