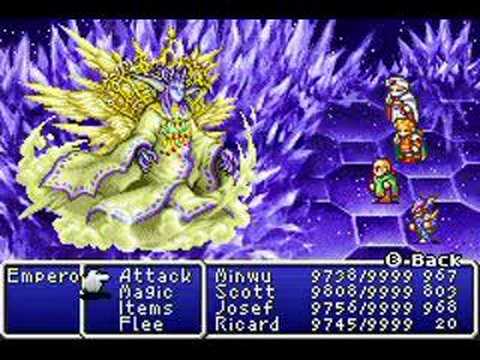 I confess. I’ve never played a Final Fantasy game before. I realize that this is considered a serious shortcoming in the gaming community, so I’ve taken steps to rectify this. The question remained however, which Final Fantasy to start with? I like linear things, so I chose Final Fantasy as played in Dawn of Souls on the Nintendo DS. Yes, I know they made changes to the game for the remake and it’s not the same pixelated joy from your childhood – but being able to play this game while waiting for the bus made the long dungeons bearable.

Adorable simplicity aside, I really liked this game. I understand the addictive nature that made people return again and again to the series. Final Fantasy 1 has a great hands-off approach. Technically, the game is linear, since you can really only do things in one specific order, with the exception of not doing things at all. I almost skipped one dungeon entirely, by accident (and no, not the extra optional dungeons that they added to Dawn of Souls). However, I spent so much time wandering the map, looking for the next plot point that I felt like I had options. Really, your options are: fight things in random encounters forever, or someone tells you save their town so you go to a dungeon and fight things forever. I did not use a walkthrough so I really had to think before tried something, or I’d end up just fighting things forever. The game wasn’t strong with balance.

The hardest lesson was that the game would not reward me for exploration. Sometimes there were chests down a long hallway, but more often there was nothing but pain. I have been so trained by games like Skyrim to explore every nook before moving on, that I never needed to grind levels in this game. My poor sense of direction in video games and compulsive desire to walk down the path ‘just in case’ meant I was always at an appropriate level for the boss. The greatest example of this is the ‘Hall of Gigas’. It is a pointless L-shaped hallway that connects to the center of the dungeon on both ends. For a hellish span of that L, you encounter a Giga (giant) every 1-3 steps. There is absolutely no reward for this, you simply end up back where you started, a few health points lower, if a few experience points higher.

Don’t take this for complaining. I liked it. It was a nice change from modern games that hold your hand while you cross the street. In this game people gave terrible hints at what you were supposed to do next, or where to find it. Nowadays, you have a journal marking down every detail, in case you forget, and a giant arrow pointing toward your goal; or you have an irritating sword spirit that will literally tell you the answer without your having asked for it. My greatest, well second greatest, dissatisfaction with Skyward Sword was the games refusal to let you solve the puzzle on your own. Skyrim is the same way; ninety percent of the quests pop up with a checklist and giant arrow telling you where to go next. You feel less like you’re playing a game, and more like your obeying your computer overlord and doing some chores. Of course, Final Fantasy hit the other side of that argument on occasion, eliciting the ‘how on earth was I supposed to know that’ reaction, but overall, it was a great change. Now on to 2 and 3.