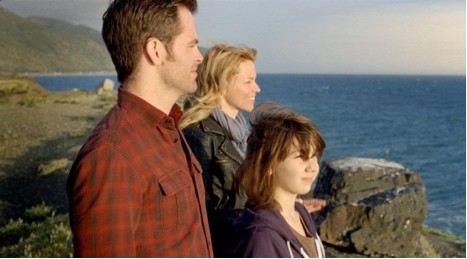 I have very little patience for movies with plots fueled solely by one character inexplicably not telling another character a key piece of information. My patience is particularly tested when the information in question actually isn’t very damaging. And so this week’s feature, People Like Us, was kind of an exercise in patience. The central premise is that Chris Pine’s character, Sam, finds out that his recently deceased, and permanently estranged, father left a bunch of money to a never-before-heard-of sister, Frances, played by Elizabeth Banks. The money was left in a shaving case to be delivered by Sam to Frances and her mop-haired son, Josh. Sam desperately needs the money, but he decides to go meet his half-sister anyway. At first, he clearly lies to her just in case he decides to keep the money. That’s flimsy, but okay. But then he keeps lying, long after it’s appropriate, and the knowledge hangs like an inevitable bomb over the proceedings.

Yet, it didn’t bother me as much as it could have. People Like Us is manipulative and unoriginal, and relies on the aforementioned plot trope, but Banks and Pine invest their characters with so much humanity it’s easy to forget all that. Michelle Pfeifer also imbues her confused, sad matriarch role with enough pathos to help you swallow some of the more difficult melodrama.

The movie benefits from never taking things too far. When two characters look like Elizabeth Banks and Chris Pine, there’s a certain amount of romantic-tinged chemistry that comes up. In fact, I read one plot description that flat out stated that Frances developed feelings for Sam. The movie, however, avoids this obvious melodrama, leaving it as subtext and character coloring. They do the same with Sam’s relationship with both father and mother, keeping the emotional abuse and neglect to vague passages and anger.

That’s not to say it’s a particularly subtle movie. Frances is an ex-alcoholic/drug addict who clearly acted out to get daddy’s attention, and Sam is a corporate stooge who was clearly trying to move as far from his father as humanly possible. But the movie mostly avoids battering us over the head with these ideas, and Pine and Banks provide subtle, nuanced performances that help cut out that sense of bullshit pop psychology.

People Like Us isn’t a great movie, and it’s no surprise that it got buried in a weekend that saw the release of Ted and Magic Mike. But it’s a surprisingly endearing family drama with great performances, perfect for a random Saturday spent hung over on one’s couch.

SIDE NOTE: This movie featured a tiny performance by Mark Duplass (who’s part, I think, ended up mostly on the cutting room floor), which begs a very important question: with Duplass appearing in Your Sister’s Sister, Safety Not Guaranteed, People Like Us, and Darling Companion this summer, as well as continuing to star in FX’s The League , has Duplass been replaced by an acting robot that doesn’t require sleep?