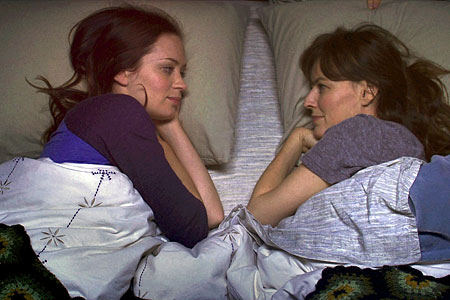 Fresh off the indie hit Humpday, writer/director Lynn Shelton thrusts into the spotlight with Your Sister’s Sister.  The basic premise lies in the trailer but for time’s sake we’ll summarize it in one sentence: Iris invites Jack to stay at a cabin but when Jack arrives her sister is there and he sleeps with her.  Inevitably, Iris shows up in the morning and a series of the most crushing and intelligent scenes carry us through the next few days.

While it seems like you’ve heard it all, this tiny film (in scope, budget, and run time) has a few great reveals mixed with the most true-to-life characters of 2012. What makes Your Sister’s Sister such an intricate and affecting film is that it does not let any of its participants off the hook.  In a film where 95% of the action takes place between three actors in two rooms you have to have incredible dialogue to keep the viewer’s interest, and this film delivers.

The clever, quiet, and well-paced script is given uncanny gravity by Rosemarie Dewitt, Emily Blunt, and Mark Duplass.  Their pauses, furtive glances, and laughter bring the palpable pain of the characters to life.  The film’s close-up shots and claustrophobic cinematography make the audience into voyeurs, bringing uncomfortable tension to even the softest scenes.

With so much going for it, Your Sister’s Sister makes a fatal mistake leaving most of the last act up to audience interpretation.  For a film that so decidedly, painstakingly, sets up its characters to make plausible decisions, the final five minutes allow us to chose the end of the adventure.  It’s an interesting choice that makes me wonder why Shelton provides ambiguity in a film where everything is completely mapped out.

Nevertheless, the realms of reality, the bits of sensationalism, and the waves of emotion paint a picture prettier than the Seattle coastline where the action takes place.   It’s not a sad film and not a funny one either.  It’s a film that unabashedly says how awkward and messy love between sibling, partners, and friends can be, but certifies that love in general needs to be fearless.  Lynn Shelton proves that she’s not afraid to get down and dirty with emotions.  Viewer beware.