Imagination is a terrible thing to waste. For a company that actively strives to ‘re-imagine worlds, re-connect communities, and re-awaken artists through the power of theatrical performance’, Imaginary Beasts wastes nothing with their summer smash “Cruel Botany”. Director Matthew Woods impressively leads his company of actors through not one, but two plays in anything but a conventional evening of theatre. The magic is truly in the company’s ability to re-imagine a traditional text and form new relationships between the text and the actors.

The first play, Harry Kondoleon’s The Fairy Garden, is a genius fairy tale about perhaps not always getting exactly what you want. The prologue features a very capable dancer, Austin Aoh, ushering us into the garden of Dagny and Boris. Aoh is beautiful in his movements and tells a story with his body, but his face often conflicts and leaves something to be desired in the storytelling. When the play opens, the audience can feel the languidness of life in this garden; we feel as oppressed as Dagny, a bored housewife played with some charm by Molly Kimmerling. Kimmerling’s talents never seem fully showcased in this role, flitting between sincere oppression (which is honestly the funniest moments) and campiness (the lack of sincerity to ground the melodrama detracts from her overall success). Kimmerling’s Dagny is married to Boris, a rich but unlovable man, but she wishes to be married to her mysterious Mechanic (yes, that’s really his name). 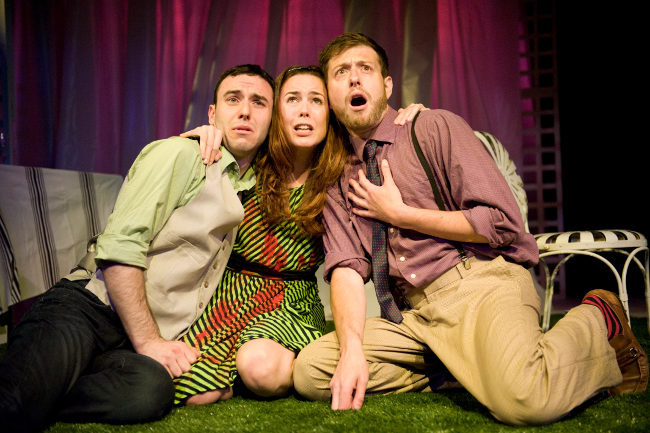 Luckily, she (and we) have her two gay friends in the garden to help her decide how to deal with her horrible life choices. Kimmerling’s best moments are with the grounded, rational Roman (Joey Pelletier) and his flighty, flamboyant lover Mimi (Sam Eckmann. Pelletier and Eckmann’s relationship is best told in subtle glances, snide remarks, and silence. They work brilliantly off each other to create intrigue in their relationship as they each give Kimmerling advice on her own relationship with her two loves. However, in the Roman/Mimi scenes without Kimmerling, the play plods through some awkward dialogue that even these talented actors can’t redeem. The energy level drops, the commitment from the actors sours, and everyone knows nothing good will happen for these characters, but damnit, I want to believe in it. Fortunately, we have additional characters to divert our attention.

Woods’ direction is brilliant in almost every scene. Despite an uneven script, he keeps the play moving with purposeful blocking and by instilling backstory and relationships among the characters. Woods’ greatest talent is his sense for the absurd and willingness to go there with his cast. Jacqueline McCoy’s entrance as The Fairy is nothing short of stunning, captivating, and brilliant. I was tempted to return for another performance because I was giggling so hard in my seat. Her return as the more humanized Fairy is less compelling, and maybe rightfully so. Juan Carlos Pinedo is lackluster, but I blame a boring character more than a boring actor; he seems committed to his role, and he’s genuinely funny with McCoy in later scenes. However, the stand-out performance is by Jesse Wood as the much-talked-about The Mechanic. Wood’s scene with Pelletier is clever with just the right amount of camp and charm to make the characters work. Wood’s Mechanic carries just enough insecurity in his undertones to create a believable character within this fairy tale. Whether intentional or not, Wood is sympathetic, and luckily, Pelletier is as committed and in-the-moment as Wood, creating a dynamic scene. Of course, it doesn’t hurt that there’s jockstraps and lap-dances involved. All of that aside, it’s this scene with these characters that ultimately changed my mind on Kondoleon’s writing. The play ends on an odd note, but I can’t say I was surprised or disappointed; the preceding scenes are so good that I was given exactly what I wanted from the production.

After a short intermission, we’re back with something entirely different. The second play, Federico Garcia Lorca’s The Love of Don Perlimplín & Belisa in the Garden, tells an entirely different story set in a garden. I understand why Woods said he is more comfortable directing this kind of theatre; Lorca’s play sparkles with an innovative mixture of dialogue and movement. Featuring the underused Pineda as Don Perlimplín, the story skips along thanks to the sympathetic protagonist and the hilarious McCoy as his servant Marcolfa. What this production lacks in storytelling (I had some difficulty following the characters through their accents and quick-changes), the company more than makes up in heart. This heart with the spirit of the play allows the production to overcome some minor flaws. Kimmerling is relatively monotonous as Belisa, stuck in her melancholy, and delivers (intentional or not) a one-dimensional performance, except for a rather heart-felt ending. Pelletier is wonderful as Belisa’s Mother for a rather short, but hilarious entrance. The Duendes, played by Pelletier, Auh, Eckman, and Wood, truly captivate the eye and ear in the essence of visual storytelling. Together, the ensemble makes this story memorable and remarkable, thanks to Woods’ strong directing.

I need to commend, first, Cotton Talbot-Minkin on her especially strong costume design. From The Fairy to The Duendes, Talbot-Minkin shines in this production with her use of color and fabrics that add to the storytelling. Also exceptional is Micah Tougas and Auh’s choreography- dance and movement tell the story where words cannot. My favorite contribution was Chris Bocchiaro’s lighting design; the sign of great lighting, it was only after the performance that I gave real thought the stunning colors and fades Bocchiaro orchestrated, adding to the production but never distracting. Lastly, Michele Teevan keeps the production, especially the Lorca piece, moving at the perfect tempo. With two plays, this production could drag in more than a few parts, and yet, like the plays themselves, the pace is light and appropriate.

Overall, I was more than pleasantly surprised with Imaginary Beasts. While I found the play selections odd, their delivery is nothing short of imaginative and clever. I think I’ve found a new company to follow through future productions, and I look forward to Woods’ directing endeavors to come.

Storefront's Hangman
Theory at Tarragon
On Tour: Champions of Magic