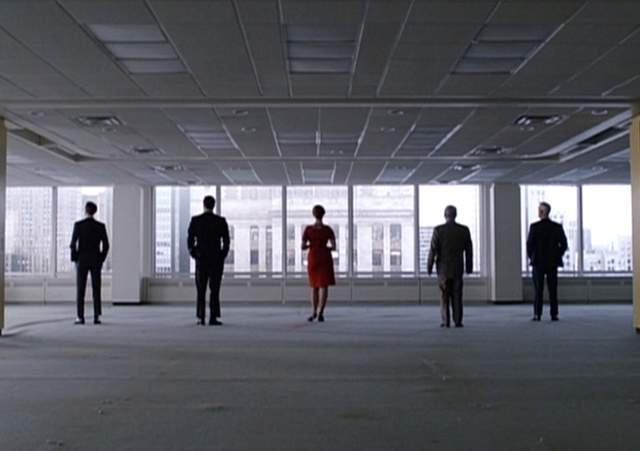 Matthew Weiner said that this season of Mad Men was about the unhappiness at the center of contentment. The season finale, “Phantom,” dealt with this idea explicitly – making that subtext text by having not one, but two characters explain exactly how little any of our characters’ success means to them. Pete, in a heart breaking monologue to his electroshocked lover, explains the story of his “friend” who chases after another man’s wife in the hope that this one thing will be the solution to his problem, only to find out that the wound will always be there. Later, Don hallucinates his dead brother telling him that there’s a rottenness at his core.

It is Sterling Cooper Draper Price’s job to make people think that there is one small thing standing between them and happiness : topaz pantyhose, the next cigarette, jaguar. But its partners suffer under the same delusion. Pete invests everything in an enigmatic and possibly insane house wife. Don tries to cover it with Meghan. Peggy moves to another company. Roger loses himself in LSD. Joan makes partner. The firm moves upstairs, and the image of the SCDP partners standing in an empty office represents at once the quintessentially American idea of expansion and the utter hopelessness of the show’s title sequence. It’s a glorious moment, a perfect synergy of theme and imagery, and it’s what Mad Men does best.

The whole finale is not this good however.

When the fifth season of Mad Men started, I had a grand ambitious plan to cover weekly episodes in little 2,000 word essays analyzing where Weiner and CO were taking us. I was really excited for the opportunity. Each episode was so densely packed, I thought I’d have plenty to talk about. But Mad Men is really a season-long show, and talking weekly about the developments felt empty. It was hard to know how to feel about the big developments before I knew what they meant in the long run. And so, about halfway through, I resolved to wait until I could expound on the season as a whole.

The fifth season may have been the show’s most ambitious to date, but it was also the season most obsessed with its own symbolism and melodramatics. Two late-season developments felt particularly overwrought. Joan’s decision to sleep with a client in order to make partner works beautifully with the show thematically and with Joan’s character in particular, but it wasn’t entirely necessary. In fact, the greatest benefit to this storyline was the way it shone a light on Don’s development, and on Don’s sense of the world. Don’s belief that he could “save” Joan, that he could show her his better path, was such a brilliant illustration of just how out of touch with everyone else Don is.

Which leads us to my other least favorite part of the season: Lane. The show did a perfectly adequate job of establishing a world in which Lane Pryce would kill himself. Of course they did; it’s Mad Men. They plot out seasons with the precision of a surgeon, and their characters are like carefully chiseled sculptures. But Mad Men doesn’t need shocking deaths and other such melodrama to fuel the story, not when they manage to make a single look from Don to a pretty girl at a bar feel like a life changing moment. Again, the moment works for what it illustrates about Don. When he tells Lane that all his disappointments are just the birthing pains of the next moment in his life, it really illustrates just how different the world is for Don Draper. It also illustrates exactly why he can never be happy.

But as a plot development in and of itself, Lane’s suicide was unnecessary. And it highlighted a central flaw of this season: the desire to make explicit the themes and ideas that the show had already told us. Like the finale’s over reliance on the “rotting tooth” imagery, this season sometimes got overly bogged down in its brilliant metaphor, and wanted to explain the same thing to its audience over and over again. It’s unnecessary, Mad Men. By this point, we’re with you. We get it.

If I sound overly harsh on Mad Men’s fifth season, I don’t mean to be. It produced some of the best episodes the show has ever created. I loved Roger’s LSD trip, Meghan and Don’s fascinating and beautiful new marriage, Peggy’s entire character arc, some of Lane’s and nearly anything involving Sally Draper. And those same themes that the show occasionally made too explicit were so brilliantly paced and utilized throughout the season. The show never quite lived up to its “era of civil rights” promise, but then I’m not sure I would have liked that show very much either.

In the end, Mad Men remains a deeply disturbing show about the way that ambition and talent belie a dark yawning hollow at the center of humanity. The image of Don walking away from a beautiful film shoot, leaving behind his beautiful young wife, and into an empty studio lot is the perfect illustration of this. In the glow of the lights and all the fake story, the world seems alive and pointful. But lurking all around it is a dark emptiness. In helping Meghan get closer to her ambition, Don resigns himself to lurking through the darkness. It’s a metaphor made all the stronger by the fact that the show doesn’t spell it out. It doesn’t need to. You can take what you want from the last scene – we’ve had a season’s worth of buildup. That’s Mad Men at its best. This season featured some overwrought lows, but it also featured moments like that one, where the show’s literary pretensions meld beautifully with its cinematography and detailed character work.