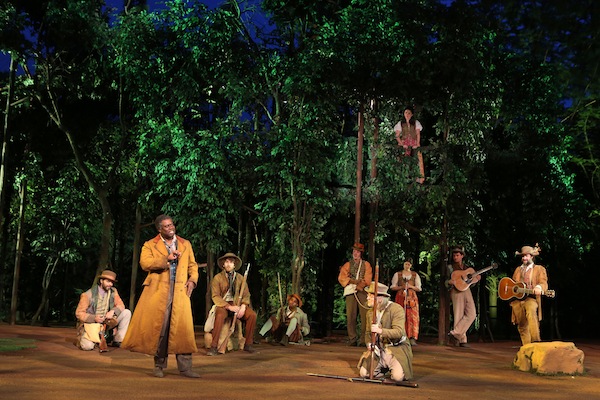 Shakespeare in the Park doesn’t have to– and shouldn’t– be artistically confined by the fact that it takes place in the summer, and the Public Theater is commendable for often putting on shows that seem in argument with the very theater in which they take place. But sometimes, when the thermometer goes way up and the weather is sizzlin’ hot, the play you want to watch isn’t Hamlet or Coriolanus. You want the theatrical equivalent of a cold popsicle, something fresh and zesty that will fizz you through the rest of your day in a haze of bubbly joy. As You Like It is that popsicle, and the production currently on at the Delacorte, directed by SITP favorite Daniel Sullivan, delivers.

In his director’s notes, Sullivan states that you “do As You Like It when you have a Rosalind”, and his show is even more structured around that character- one of Shakespeare’s few showy female parts- than the text itself. And for good reason– Lily Rabe is radiant in the role, a glowing, romantic jewel and, surprisingly, the comedic heart of the show. Her sense of timing is second to none (one almost wishes she were also playing Touchstone as opposed to Oliver Platt, who seems to have missed the lesson on how long to hold a comedic pause), and she brings a charming girlishness to her Rosalind, particularly in scenes with lover Orlando, when she is often reduced (delightfully) to a wilting, giggling high school girl. Luckily, David Furr provides the perfect Orlando– a sweet, supportive foil for Rabe to play against, who never steals away what is clearly her show (but he is also understandable as a man with whom such a tenacious woman could fall in love).

The supporting players all perform admirably– particularly Stephen Spinella as Jaques, whose monotone delivery brings most of the laughs that don’t belong to Rabe. Renee Elise Goldberry, as Celia, is the other standout, providing Rosalind’s other emotional rock and showcasing a deep sisterly love that is often missed in productions of the play. A charming surprise is the comedy brought by the line-less onstage musicians, who act as a sort of travelling bluegrass greek chorus to the action around them; the music itself is ever-present, occasionally overwhelming the text but mostly providing a satisfyingly pastoral backdrop.

The setting is a bucolic, rustic backwoods Americana with purposeful timelessness but hints toward the antebellum South; this staging works wonderfully for most of the design (the costumes include lovely sharp lines in the court and pleasant haphazardness in the forest) but is occasionally awkward in implication– for example, the casting is admirably racially blind, but that results in having Rosalind the white daughter of a black Duke in a setting inspired by the 1800s. The forest set, which can be a challenge in this play (it is difficult to make anything on stage look entirely organic), manages not to fall into that trap– scenic designer John Lee Beatty has cleverly woven leaves and branches into the balconies to provide disguises for the two-level set. Actors are free to wander in and out of the treetops at will (and never seem like they’re going to fall out, which can bring an audience right through the fourth wall back into their seats).

The one notable place where this production falters is the length– almost nothing has been cut, and it runs almost three hours, including intermission. Much of the clown subplots could be done without (particularly when the play has been directed to be carried on Rabe’s back), and the music interludes occasionally linger beyond their welcome. It’s not an unpleasant way to spend three hours, but it would be a far more pleasant way to spend two. The choice to make the play more romantic than funny is not an unwelcome one, but the languidness could certainly have done with a dash more edge-of-your-seat laughter, if only for variation.
Overall, however, Sullivan has created one of the most charming park productions I’ve seen in the last few years, if perhaps not the deepest. Not that feeling and thought hasn’t been put into the production– I could have sworn I smelled pine coming off the stage trees. Was it from the set or from the surrounding park? I suppose not being able to tell was the point.