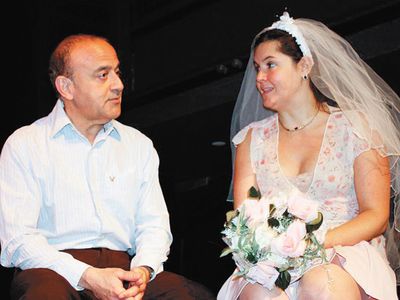 Wrong for Each Other, Indeed

I’m very fond of Encore Entertainment. Their heartfelt production of The Laramie Project was sweetly affecting, and their theatrical concert Song in the Key of Stephen was chock full of fantastic performers, clever song choice and thoughtful production. Their latest effort, the comic two hander Wrong for Each Other, however, was a far cry from their best work.

Repurposing quality director Mario D’Alimonte (Laramie, Stephen) as a leading man was the company’s first mistake. Stiff, cheesy and simply too old for his role, D’Alimonte was my principal complaint in a generally fraught production. I was pretty sure I didn’t like Kelly Anne Woods as D’Alimonte’s love interest Norah, but as my friend pointed out at the welcome intermission, it’s tough to judge her effectively opposite such an badly cast partner, the awkward chemistry was as little her fault as the stilted blocking.

I understand the directing challenge inherent in the multi-location story and low-budget company matchup, but I struggle believing that director Jacqui Burke  couldn’t think of any solution less uncomfortably uninspired than 5 mini-sets that the characters get up and walk to as they bizarrely transition from place to place in the terribly constructed memory play. Once in a particular mini-set, D’Alimonte and Woods had about a foot of movement space each, so there was more stand-still-and-gesture blocking than is ever okay.

The costume design by Alex & Carmen Amini was equally horrific (if not more horrific than the direction). D’Alimonte was dressed alright- I think, there wasn’t much memorable about him- but poor Kelly Anne Woods looked like a Golden Girl trying to save a buck. Her horrible pink suit resembled mangy terry cloth and could not have been frumpier. No actress deserves that level of aesthetic mistreatment, especially one trying to sell a love story.  Looking at the poster for Wrong for Each Other, I’m just now realizing that there was supposed to be a notable class difference between the symphony-loving venue manager Norah and the baseball-loving housepainter Rudy. I totally didn’t get that during the play, I wasn’t quite sure why they were so “wrong for each other” at all, really. They were both in unflattering blazers that were most likely bought at Goodwill. If the central premise calls for a high-class character in order to work on its most basic level, there is no excuse for dressing her in terry cloth or its aesthetic equivalent.

At the centre of all this well-meaning terribleness was Norm Foster’s script. In the hands of stronger actors with palpable chemistry and rat-a-tat timing, I am determined to believe that Foster has a passably charming romantic comedy script here. It’s a far cry from meaningful and certainly not unique in any way, but comedy (and quick, rhythm-based dialogue) is all in the timing, and not a single one of Foster’s lines was delivered strongly enough to judge. He does, however, layer in more clichés than I knew how to deal with, for which he’s being deducted major points (particularly for the verbal ones, situation clichés are harder for writers to avoid). Foster’s script is nothing special, it can never be called good, but Encore didn’t do anything to elevate it. They tried, but they somehow only managed to make it worse.