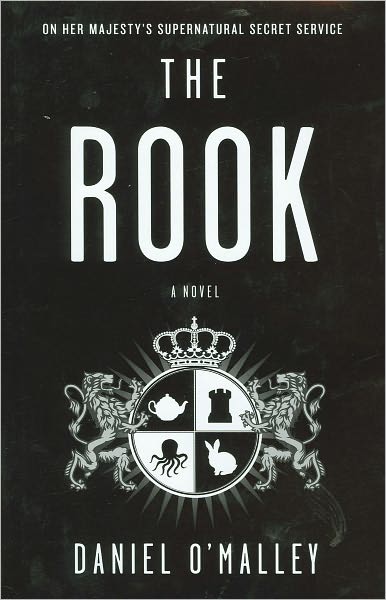 The Rook by Daniel O’Malle

The Rook is a novel that I FRICKIN’ LOVE!!! (I refuse to apologize for the capslocks. I am not ashamed. This is the strength of my love). It took me 3 days to finish… but only because people insisted that I put it down to do unimportant things like … sleep, and eat, and go to work, and other nonsense.

The Rook is O’Malley’s debut effort and, as I may have subtly hinted at before, it’s AWESOME. The novel starts with Myfawny Thomas (apparently, rhymes with Tiffany) waking up in the rain with no memory, surrounded by dead people wearing latex gloves, and discovering mysterious letters to herself in her jacket pockets. This is literally the first couple of pages. It only gets better from there. The letters present Myfawny with some basic explanation (clearly, people are after you, and will probably continue to be after you. You should probably do something about that) and a choice: assume a new identity and run far, far away, OR fully assume the identity of Myfawny Thomas, and figure out what the heck is going on.

I give you one guess about which option she chooses.

Okay, so I don’t want to summarize too much, but basically, the novel spins out from that choice with Myfawny scrambling to understand the world she’s immersed in (apparently her former self was a powered, but primarily administrative Rook in a supernatural MI5/MI6 equivalent. But with chess titles/imagery), a series of intricate plots (there are traitors! And Belgians!), and some stunningly weird characters (supernatural secret agency has supernatural secret agents. Duh).  Thankfully, she receives some help in the form of painstakingly organized instructions, dossiers, and letters from her former self. The plotting of this book is superb, and interestingly/engagingly organized as well, cutting back and forth between present action and Myfawny’s letters to herself.

But rest assured, this book is not just a Dan Brown plot machine with no discernible character depth or growth (BURN! No, but really it’s not just a Dan Brown thing, it’s an issue that’s generally endemic to the thriller/suspense genres. There’s often so much complicated plot that it doesn’t leave room for intricate characters. But I have noticed that Dan Brown does have this problem rather consistently, and yes, it bugs me). Anyway, the point is that this book is not like that. Myfawny is a thoroughly well constructed character, and despite the sci-fi suspense/thriller aspects of her story, she’s incredibly smart, brave, grounded, funny, specifically opinionated, and genuine. For example, when she accidentally bumps into a coworker on the one night she’s given herself off since waking up, her first reaction is, “Oh, come on!” (pg. 316. Yes, I looked it up. You know you love a good citation).

Bottom line: I would really like for her to be my best friend and/or if I could elect to be her when I grow up, that would be excellent.

And here’s the thing–while I love Myfawny, BOTH Myfawnys are great, and wonderfully written. I know: you’re all like, wait, what? Well, there’s current Myfawny (woke up in the rain), and the FormerSelfMyfawny (wrote all of the letters). And O’Malley does a fantastic job of differentiating them as characters, and giving them wonderfully rich moments of reaction to each other. Myfawny has a lot of great reactions to her Former Self while reading the various letters, gauging people’s reactions to her in the office and whatnot, and her Former Self gets to muse in her letters about the emotional ramifications of preparing your body and your life for someone else to take over. It’s tough to explain, but it’s really really really well done, and I hold both Myfawnys near and dear to my heart.

And there are rumors of a sequel THANK GOD/WHATEVER DIETY/UNIVERSAL FORCE/YOU KNOW WHAT I MEAN!!! This news fills me with YAY because that means that I’d probably get more time with Myfawny(s)! Which is great, because the only bad part of this book for me was when it was over, and I knew that I’d miss our awesome, funny heroine.

And this is going to sound odd, because this review is already… lengthy, but I keep feeling like I’m selling this book short. Because I’ve told you about how I love the Myfawnys, but I haven’t mentioned Ingrid, or Alrich, or Gestalt, or Anthony, or Lisa, or Alan Summerhill, or Graaf, or any of the other myriad of terrifying, hilarious, awesome, and endearing minor characters in the book. Just trust me—they are all GREAT (Ingrid and Graaf are probably my favs. Although GUBBINS!!!). And really, this book is, yes, a thrill ride, and a sci-fi novel with great world building, but it’s also REALLY FUNNY, moving in a subtle, non-pretentious way, and unselfconsciously itself, regardless of typical genre restraints.

I could rant about just how much I love this book (a lot a lot a lot) for a very long time. None of us need that. JUST READ THIS BOOK. I promise, you will be happy that you did. And then when you’re done, we can talk about how we can’t wait for the sequel.