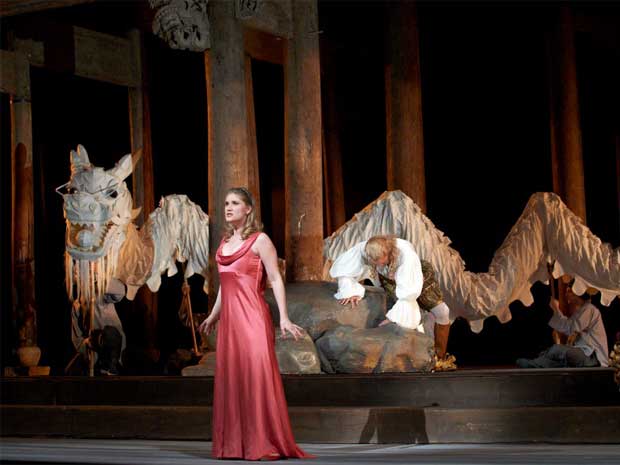 Semele at the COC

This has been a bit of a rough repertory period for the Canadian Opera Company- the full-length Offenbach they presented earlier this month was obnoxiously long and unforgivably dull and their double feature of Zemlinksy & Puccini one-acts contains one dreary dud and one brilliant success (the Puccini, predictably). With only 52 minutes of greatness already established in this cycle, there was a lot of pressure on last Friday’s performance of Semele.

I saw Semele with a great lover of Handel by my side. She’s nuts for him and thus she kind of loved Semele. I, however, thought it was fair but not stunning and a little over-complicatedly silly. While I’m fond of the occasional Handel sonata, I think his style is too light, too chipper and sweet for a story like that of Semele’s fraught affair with Jupiter and eventual death. By Fire. Flute trills, to me, just don’t say “death by fire”. The score is pretty, sure, but seems separate from the story and, certainly, from director Zhang Huan’s Buddhist interpretation (which eliminates much of the optimism from the end of the opera and frames the otherworldly story with the tale of a man who was executed for killing his wife’s mistress (see what I mean about the Handel-ness? Not quite so in-keeping).

The performances in Semele’s principal cast (the COC Ensemble Studio members will take on the roles on May 23rd for one night) range from blah (the muffled altos, mostly Allyson McHardy) to brightly clever (Anthony Roth Costanzo’s delicate countertenor tells you all you need to know about Semele’s would-be husband, Athamas), to standard-strong (bass Steven Humes, double cast as Cadmus and Somnus, William Burden’s soaring Jupiter) to utterly brilliant (Jane Archibald’s Semele is profoundly beautiful, astounding even when delivering the exact same phrase an angering 47 times. Her vocal control is insane and her tone serene). Huan’s anxious direction sometimes detracts from the strong cast with moments like when a full chorus of sex-having couples overshadows a particularly lovely Jupiter solo or when useless and misplaced sumo wrestlers waste the audience’s time and stall the story. But he also makes the occasional fascinating addition such as the stunning non-libretto traditional singer at the end of Act One and the multi-use concept of the omnipresent temple. Said temple’s backstory is presented in video form at the beginning then recalled at the end in completely unnecessary fashion. Huan’s concept and inspiration are fascinating but not helpful enough to the actual storytelling for it to be useful that he imposes said inspiration on the audience. A thoughtful explanation in the director’s note, for those interested, would have sufficed.

The imposing of the strained frame onto a story that doesn’t parallel perhaps as well as the director would like is a symptom of Huan’s biggest flaw as an interpreter of Handel’s already somewhat flawed opera- he needs to edit. Huan could benefit greatly from Coco Chanel’s rule of accessorizing (always take off the last thing that you put on). Surely sumo wrestlers, an inflatable sleeping god, a golden-winged jacket, an unnecessary modern frame, on-stage blowjobs and general choral sexytimes, a prolonged horse-erection joke AND the ridiculous wrapped-in-a-dragon metaphorical fire-death ending weren’t ALL necessary. Couldn’t we have made do with, maybe, 3 of those gimmicks? Because what is essentially a cautionary fable about gods and mortals set to a fluffy-sweet score becomes a bit of a circus in Huan’s over-directorial hands.