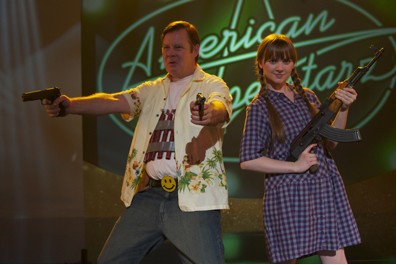 A few years ago when I checked out Bobcat Goldthwait’s last movie, a dark comedy called World’s Greatest Dad (which starred Robin Williams), I was impressed with the vision of Bobcat as a director. I remember thinking when I finished watching that movie that I would not hesitate to watch the next film he brought to the big screen. A few years later, that next Bobcat movie is here and titled God Bless America. This is Bobcat’s most controversial picture to date- dark, sadistic and very righteous all at the same time. While the film is very violent and disturbing, there are moments when we can agree with the characters and why they are rebelling against a dumbed down society that has lost its ability to be civil. It’s a thought provoking film that acts on what many people wish they could do to those who are mean and hurtful. That kind of fantasy is enough to convince any audience member to not take up two spots when they’re parking or to turn off their cell phone in a movie. It’s a film that not only criticizes society but also itself as it glorifies its characters.

We follow a middle aged man named Frank, performed perfectly by Joel Murray (Shameless, Dharma & Greg). After learning that his ex-wife is about to remarry, Frank is fired from his job for something that seems a little too politically correct and then finds out later that same day that he has an inoperable brain tumour that will end his life sooner than later. Rather than take his own life, Frank is convinced to take his anger and frustration out on the people he thinks truly deserve to die, going on a shooting spree of reality TV stars and hateful political pundits who spread fear on their shows. Frank then finds himself the focus of an admirer and confidante in a young sixteen year old girl named Roxy (Tara Lynne Barr) who shares his hatred for how the scum of the country are put on a pedestal and worshipped by countless TV viewers. As we watch this interesting duo go on their murderous road trip, we can’t help but root for them despite the fact what they’re really doing is wrong. We understand their frustration and relish their actions as a fun fantasy that is the brainchild of a sadistic writer/director.

The amazing film from the mind of Bobcat Goldthwait (that crazy dude from the Police Academy movies) offers enough food for thought while being thoroughly entertaining. God Bless America is a harsh evaluation of where society is today and how out-of-hand pop culture and reality television are getting just to score some high ratings and a few extra bucks. The movie almost reminds me of Oliver Stone’s Natural Born Killers but with more of a moral message and the dry wit of Office Space.

Another standout performance in the movie comes from young actress Maddie Hasson (who plays Willow on Fox’s new show The Finder) as Chloe, the most spoiled brat on television who becomes Frank’s first target. Having watched Chloe’s repeated temper tantrums on tv, a little part of us doesn’t feel any remorse when Frank takes a gun and puts that spoiled brat into the ground. I’m sure many people have wished they could do that with a lot of crap that’s being spewed out on every network as ‘entertainment’. Frank acts out that fantasy, taking out as many perpetrators as he can leading up to a grand finale that is both shocking and hilarious when it unfolds.

Bobcat shows us here, as he did in previous projects, that he has a real gift for mixing childishly dark humour with scenes that are very dramatic. God Bless America is also one of the funniest and most thought provoking films I’ve seen all year. The cast is great, the scenes are funny and at the same time leave you with something to chew on months after watching it. If you enjoyed movies like Natural Born Killers and even Falling Down and at the same time have a deep rooted hatred for shows like American Idol and any show that stars someone named Kardashian, you will get a huge kick out of this movie. This film peels back the many layers of our pop culture, analyzing the place of media propaganda, reality TV and even people who don’t behave themselves in movie theatres. It showcases what people consider entertainment these days for the cultural cancer that it really is and never apologizes for it. It’s hilarious and a film that leaves you thinking and wanting more. What more could you expect when seeing a movie? Bobcat has delivered a cinematic gem, check it out when it releases in select cities this weekend!