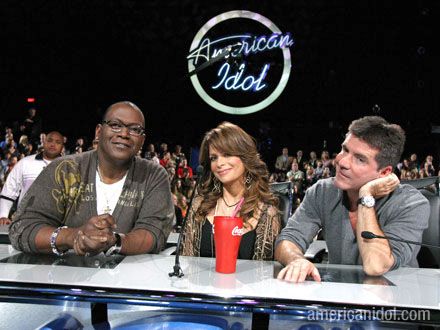 I literally yelled when Clay Aiken lost season two. I went to see 9 to 5: the musical mostly to see Diana Degarmo (and enjoyed Hairspray more for its inclusion of Vanessa Olivarez in the touring cast)- I still watch Diana’s genius “Don’t Cry Out Loud” on YouTube from time to time.

I remember the genius of Jennifer Hudson from her rendition of “The Circle of Life”, not from Dreamgirls or everything that came after. I saw Carrie Underwood in her very first concert- the American Idols Live (literally, first concert). I loved American Idol, and everyone else did too, and for awhile there it was a wonderful unifying experience the like of which hasn’t existed on TV in decades- save the first-ever Survivor finale and The Superbowl.

But as the years wore on, Randy’s comments became more and more repetitive, Paula got loopier and loopier until we stopped listening to her altogether, and Simon, well, Simon seemed to get bored, to resent the institution that he built, that made him famous. By the time Jordin Sparks took the title in season 6, Simon Cowell’s infamy seemed to be the only thing that had people coming back- there hadn’t been a talent that captured the imagination in years and, with so many competition shows on the air, Idol just wasn’t as sparkly anymore.

The addition of Kara DioGuardi to the judging panel in season 8 was a good idea when it came to lending the panel a well-versed and uncompromising voice, but she turned out to be annoying and defensive, oddly showy and wrote the worst coronation song in Idol history, so the gamble didn’t work out. What season 8 did bring, however, was the first truly exciting contestant since Chris Daughtry (or, really, Carrie Underwood, if we’re being realistic). Eventual winner Kris Allen was lovely and sweet, third-place finisher Allison Iraheta had a standard-Idol rock voice, but runner-up Adam Lambert was actually the sort of talent the show, theoretically, was looking to discover. He was incredible, a game-changer, a rock-solid performer who shouldn’t have had any close competition to speak of. But Idol was always afraid of, what Simon called in Adam’s first audition, the “theatrical” (because apparently Simon hasn’t seen a pop video in the past 10 years?), and the juggernaut show’s always been notably gun-shy about contestants who may or not be gay (both of the show’s greatest finale losers, Clay and Adam, later came out publicly after speculation hurt their numbers on the show). Adam’s back with his second album set to be released this spring, a great lead single with an awesome video that isn’t afraid of either his Glambert side or the more human, low-key version we fell in love with on Idol (watch it HERE). And while his presence may have shaken up Idol a little bit, his loss on finale night was a reminder of just how backwards Idol‘s outlook still is.

That backwards-ness was never more clear than the following few seasons. Paula left (then Kara and, why-was-she-there-in-the-first-place Ellen DeGeneres) and eventually Simon moved on too; their replacements were the sort of industry bigwigs who could lend some much-needed star power to the dated show (and some refreshing new voices). And that’s what Steven Tyler and Jennifer Lopez have done- they’re great judges, they really are; a little too nice sometimes, but fair and compelling and big enough deals that we want to listen to them. But the contestants remain the same (actually, I think the quality overall has gone dramatically down since the highlight of season 3), interesting performers leave early (both Casey and Hayley, though far from brilliant, could have been mildly interesting winners last year) and the same dude-and-his-guitar won in seasons 7, 8 and 9, followed by a honky-tonk baritone who feels like nothing but a throwback on a show that should be all about finding the next thing (season 10’s Scotty McCreery). The judging panel- now featuring a living-legend rock star and a middle-aged celebeauty- may be seemingly improved, but the competition just isn’t up to its old standards, and the decisive, truth-telling guy-who-can-actually-start-your-career voice is gone for good.

This week was the first for the Top-13 of season 11 and so far there’s some decently promising talent. The right guy went home week one (which is always heartening) and big singers (Erika, Hollie, Skylar, Jessica) stood out. There are a couple decent performers in the group (Phillip, Joshua) and some sweet personalities (I’m loving Jermaine), but there are also some seriously underwhelming talents. In general, though, even the really great people this season are really great on the same level of really great people we’ve seen before on Idol– there are some good talents and, my guess is, no big stars. Idol‘s slightly cheesy, image-driven, popularity contest model is quite simply dated and the tween-girl/old Southerners slant of their voting population doesn’t help matters when it comes to taste. Simon, despite his flaws, had a good eye when it came down to it, and when he was checked in (ie: seasons 1-4), Idol had a shot at being a taste-making culture-leader. The show might now be more enjoyable on a week-to-week “wanting to listen to these judges” basis, but the Tyler-Lopez charisma is as superficial as the show’s contemporary talent. Idol used to be a TV revolution, now it’s just that show that my mom really likes.