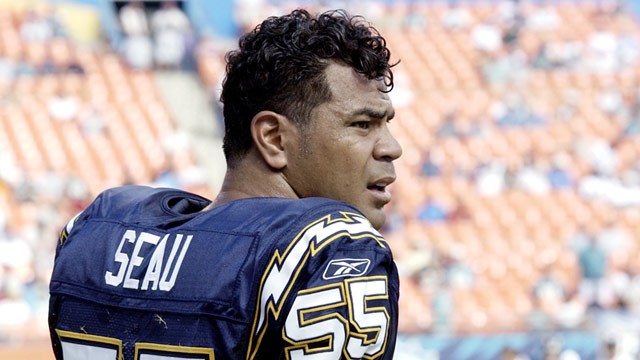 Like many lifelong football fans, I was saddened to hear about that passing of Junior Seau. TMZ first reported and confirmed the passing of the iconic linebacker, victim of what appears to be a self inflicted gun shot to the chest. Everyone associated with football and fans of all teams were saddened by the news, a tragic thing to happen to a man who was only forty-three. Seau was found by his girlfriend who then immediately called 911. He was later pronounced dead at a hospital in Oceanside. While we are saddened by this loss, this incident has left a lot of people wondering why someone coming off a rather impressive NFL career would choose to take his own life.

I, too, was a little puzzled by the incident, but I started to comprehend, while doing a little investigative work online, that Seau was not the first player to commit suicide in such a manner. In February of last year, former Chicago player Dave Duerson also shot himself in the chest. His family is currently suing the NFL for wrongful death, stating that the league didn’t do enough to prevent or treat numerous concussions that they believe severely damaged Deurson’s brain. The family of another player, former Atlanta Falcon safety Ray Easterling have also joined in a concussion-related lawsuit against the league. They claim that Easterling was suffering from depression and even dementia for years before shooting himself as well at the age of sixty-two.

This trend is not something anyone, let alone the NFL, wants to see grow in the coming years. We don’t want to see more players take matters into their own hands to deal with an issue that both the league and the players union need to take much more seriously. While it’s hard to think about it, these players have been shooting themselves in the chest so that their brains can be studied to see if there was anything going on in there that might have contributed to their state and what eventually happened to them.

Even though Seau never had to be carried off with any severe concussions, many believed he suffered a few mild concussions that were never treated. Rather than rest and take the time to heal from his collisions, Seau just kept playing. His family have decided to donate Seau’s brain to science to see if the regular wear and tear of the NFL was enough to scramble his brain. If there is such damage without the presence of a huge concussion to cause it, the NFL could find itself in a bad spot, both with the public and the courts.

If Seau’s brain comes back and shows signs of severe damage, this is going to be a fundamental crossroads for the league. Goodell has been accused of softening up the game- which, according to some die hard NFL fans, is the same thing as ruining it. The question I have for all these die hard fans is how many more suicides or players suffering from dementia years after their retirement do they want to see before we really take a hard look at what we’re doing to the brains of every player every time they get hit on the field? This issue goes beyond the NFL, as players in colleges and highschools across America are pounding each other just as hard and causing decades of continuous brain damage that will cause major problems for most of these players later in life.

The NHL is in trouble right now for not doing enough to protect their players from concussions and the conditions they cause, and the NFL is going to be on the hot seat too- three dead retired NFL players are three too many. I really hope that Goodell and the League take measures to make sure that more players in the future don’t feel the need to take matters into their own hands, feeling there is no where else they can turn. If any good will ever come from the tragic end of Junior Seau, it will be that his brain will help scientists learn what football does to the brain and how it may be avoided by future players as they try to make their mark in the NFL.

While Seau isn’t the first player to have his brain donated to investigate what impact the game had on it, he certainly is one of the highest-profile players to do so. In the NHL, recently deceased Red Wing Bob Probert donated his brain, and it turns out the infamous goon had chronic traumatic encephalopathy (CTE). It will be interesting to see if the brains donated by NFL families will turn out to have similar results. While it’s chilling to believe that these players are shooting themselves in the chest so that their brains will remain in tact for future study, we at least hope their donation to study will bring forth change that will save future players from suffering a similar fate.

Junior Seau was a player that many enjoyed watching throughout his career with the Chargers and the Patriots. While I take the time to express my heartfelt condolences on their loss, I would also like to pass along my heartfelt thanks to the Seau family for making a decision that was likely extremely difficult to make in considering what to do with Junior’s remains. It was a selfless act that I personally hope will makes a profound difference. Even in the end, Junior Seau seems to be giving everything to further the game that was his life. One can only hope this effort brings change to the NFL and protects the brain a lot more in future seasons for the sake of future generations. Seau will be missed by many, but here’s hoping that future generations will look to the man as a player who used his head to help others in more than one way.