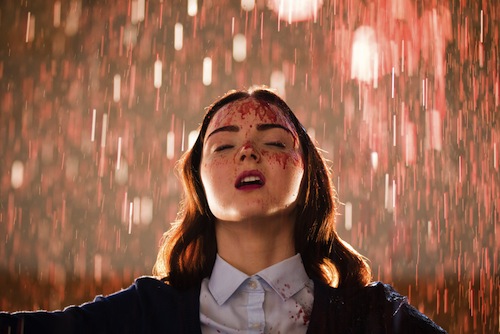 “The Moth Diaries” Is Not Worth Writing Home About

Writer-director Mary Harron has proven herself as an accomplished auteur in the realm of the psychological thriller. Having written and directed the cult hit, American Psycho, Harron has proven that she’s able to simultaneously challenge you intellectually, while making your heart skip a beat. So it’s more the disappointing that her latest foray into the psycho-thriller genre, The Moth Diaries, fails so definitively.

At an all-girl boarding school, Rebecca and her best friend Lucie (played by Sarah Bolger and Sarah Gadon, respectively) have their friendship tested when the mysterious, black-clad newcomer Ernessa (Lily Cole) begins invading their inner-circle. As her friends start leaving her one by one, Rebecca increasingly suspects Ernessa of these supernatural misgivings and, fearing that she’ll eventually lose Lucie, conspires to stop her at all costs.

All good psycho-thrillers, including Harron’s American Psycho, work because they are constantly able to create an environment of unease and suspense. A lot of this is done through careful craftsmanship and exceptional pacing, both of which are absent from The Moth Diaries.

Many of the scenes are so abrupt and fleeting that they become incredibly episodic and sporadic. In fact, most scenes in the film barely last for a minute, often cutting away when you feel like things are finally picking up. Without spending more time on various scenes and the character dynamics within them, it’s hard to be fully engrossed in the film’s mythos, which is admittedly quite interesting. The result is a film with a series of moments yearning to be a complete experience, which it never is. Without a genuine atmosphere of foreboding and anticipation, the film feels very tedious and lethargic, even with it’s paltry 85 minute running time.

In a sense, the film is like a perfectly transcribed cinematic depiction of an actual diary, but as literary scholars will tell you, diaries hardly make for great reads. Unless, of course, the characters in them are interesting; but, alas, they aren’t in this film.

The most intriguing aspect of The Moth Diaries is also the film’s major drawback. From the beginning, it’s quite clear that Ernessa’s obsession and Rebecca’s over-protectiveness of Lucie stem not from platonic desires, but something much more carnal. There are a plethora of scenes that ratchet up the sexual tension between the three, but when you feel like it’s going to go somewhere, it ultimately doesn’t. Even though there is one scene in particular that seems to validate this stipulation, the film itself neither addresses it or runs with the idea, making it seem as if it was a whimsical afterthought that was retroactively sprinkled in to create artificial nuance.

Lastly, and as a natural consequence for many horror films, the film has incredibly suspect logic. When people start dying at the school, including one faculty member, the school never closes or suspends classes. Even more frustrating is the fact that Rebecca chooses to stay, especially in the last quarter of the film. Ernessa, although intentionally vague, is neither compelling nor interesting, and her motives are never fully explained. The ending leaves you feeling empty and wanting more, but one should be careful what they wish for.

There is one scene in the film involving Sarah Gadon (who just came off a decent performance in A Dangerous Method) which is very telling of the film as a whole. Frustrated, her character yells, “this is really f@#!ing stupid”, and storms off screen. The line is delivered so well, it’s hard to tell if it’s Sarah Gadon or her character that’s talking.