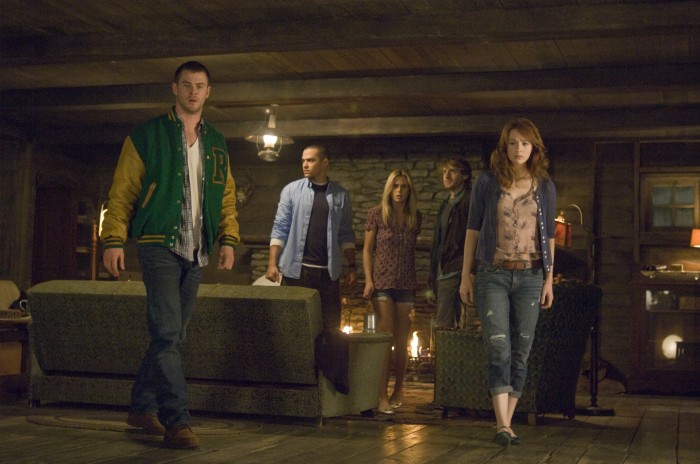 There’s a group of college kids. They are attractive. One of them has a relative that owns a cottage. It’s in the middle of nowhere. They all hop into an RV. There’s no cellphone reception. Or GPS.

They get to the cottage. Strange things start to happen. They don’t notice. People start dying one by one. Now they notice. They try to escape. But they keep making stupid decisions. Now there’s only one left.

What happens next? Does she live? Or does she die?

Chances are, you’ve seen countless films with a similar conceit. Writer-director Drew Goddard probably has to, and although his film, The Cabin in the Woods, starts off with the very same aforementioned premise, he ends up with a picture that will categorically be known as the horror film to end all horror films.

Aside from the cottagers, we are also introduced to two seemingly ordinary office workers. They talk about their marriages, drink coffee, and engage in office banter. Everything seems normal, but when we find out the true nature of their profession, their laidback, nonchalant behavior takes on a dark, sinister tone. They work for a corporation responsible for orchestrating the deaths of the vacationing college kids, in the most ostentatious ways possible. As things don’t go according to plan, their desperation to kill them is matched only by their potential victims’ desperation to survive.

Although many might disagree, it’s not hyperbolic to call The Cabin in the Woods the greatest horror film of recent years. Because conventional scary movies perpetually fail to scare us, there have been a slew of self-referential, tongue-in-cheek horror satires that carefully dissect these failed cinematic offerings. The original Scream and Shaun of the Dead are perfect examples.

The Cabin in the Woods, however, is more comprehensive than all of them. Every unintentional laugh in lesser horror flicks is obviously intentional in Cabin, taking every opportunity to introduce laugh-out-loud clichés and comically derivative dialogue. In one notable case of ambitious cheekiness, the film has cojones to have the obligatory stoner as the voice of reason. Observe,

Chris Hemsworth: “I think we should split up”

Even he sees the ridiculously faulty logic of his counterparts.

But for all of the film’s smarts, the most impressive thing about Cabin is its incredible moral complexity. To take being Meta even further than its predecessors, Cabin openly questions the morality of what’s happening in the film. As the office workers are all watching the murders Truman Show-style, one in particular starts to ponder the ethical ramifications of deriving entrainment from another person’s suffering.

We later find out that the killings are actually ritual sacrifices designed to appease the ambiguously named ‘The Ancients’. We never see these ‘Ancients’, but from the characters, we learn that they are primitive, sadistic creatures, whose bloodlust can only be indulged by increasingly depraved acts of inhumanity. It’s clear what, and whom, they’re talking about, but for those who aren’t quite sure, a quote from the similarly themed Gladiator will surely suffice.

Maximus [after swiftly dispatching another gladiator]: “Are you not entertained?!?”

If you happen to be watching The Cabin in The Woods, the answer is an emphatic ‘yes’.