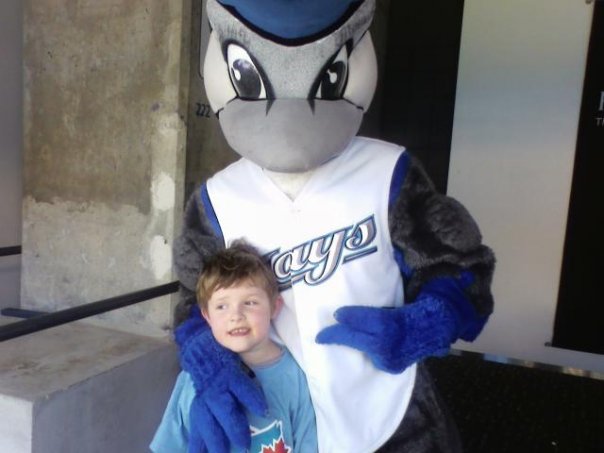 Take me out to the ballgame!

I was nine years old when I saw my first Blue Jay game. It was against the Baltimore Orioles and I only really remember three things about that game: the Jays lost, I never caught a foul ball and Lloyd Moseby stole third base. I also remember it was very cold that day, which was what fans had to put up with in April of 1984. We didn’t have a roof over our heads to keep us warm from the elements, just the cold, unforgiving steel benches of old Exhibition Stadium. Back then baseball in the spring was not very warm, and I remember keeping one hand in my coat pocket and the other on a glove as I sat in the bleachers down the right field line, hoping a fowl ball would come my way. After attending almost a hundred pro-games in various parks, I have yet to catch that elusive ball. But I still bring the same glove I took to the Ex when I was nine to the Rogers Centre with me, hoping the next game will be the day when my luck changes.

I was a very fortunate Blue Jay fan when I was growing up. In the inaugural season of ‘77, my Aunt and Uncle (who were also die hard baseball fans) bought season tickets to the Blue Jays and kept those seats until the players strike in 1994. They never had the time to attend every game, so my Dad bought 30-40% of every season and would take my brothers and I to a ton of games during those years. I grew up watching Dave Stieb, Tony Fernandez, Jimmy Key, and George Bell play their hearts out for Toronto, and those are memories that I will fondly cherish. I also fondly remember the season of ’89, not only because the Jays won the division, but because of the opening of the SkyDome, which meant no more cold Aprils games. While some fans gripe about the state of the Dome today, I still love it for the comfort it provides to fans, especially on a rainy day. My message for those fans who want a new stadium: my last rainout was in the season of ’87 and I prefer to keep it that way. Going home wet and without seeing a game sucks, so let’s not go there again.

Twenty years ago, I was also fortunate enough to witness some of the best seasons in Blue Jays history; the two championship seasons of ‘92 and ‘93. I went to a handful of games both seasons, and even remember skipping school to attend the parades and watch the unveiling of the championship banners. It’s almost shocking how long ago those great seasons were, but I am hoping that the Blue Jays will one day be able to bring more playoff baseball back to the city of Toronto. I remember what it was like to be in the Rogers Centre when there wasn’t a single empty seat and the crowd was so loud, you couldn’t hear yourself think. Toronto does love their Blue Jays, but after twenty years of being jerked around, many are jaded and unable to see the potential this year’s team provides for future seasons. I see the same potential I saw in the Jays in the early nineties. I can’t guarantee that we’ll see the postseason anytime soon, but I see a lot of fight in this team and they will be fun to watch all season long.

When I went to the Rogers Centre on Friday night to see the Blue Jays take the field against the very same Orioles, I wasn’t the only one there with a glove on. My eight year old son Ethan came with me. It was his third Blue Jay game and he was super excited to be going back out to the ballpark with his old man, just like I was when my Dad took me to see a game at the Old Ex.  Last year I took him to see the Labour Day classic against the Boston Red Sox, and we all enjoyed watching Brett Lawrie smash that extra inning walkoff homerun to send every Blue Jay fan home with a smile on their face. Ethan was a real trooper to endure extra innings, but I could tell he was wearing down as we went late into the afternoon. So when Lawrie smashed that ball over the center field wall, he was just as happy as everyone else. Not only did the Jays win, but he could finally go home!

As exciting as that game was, Ethan’s very first baseball game is still our most memorable thus far. I took Ethan to the Rogers Center in June of 2009 to see his first game just before his sixth birthday. The plan was just to grab a few 500 level seats and just enjoy the game together. While we were walking up the Centre, someone approached me and asked if I wanted tickets. I naturally assumed it was a scalper and politely said that I was going to get my tickets from the gate and that I was on a limited budget. The man then informed me that he asked if I wanted tickets, not if I wanted to buy them. In other words, he was giving his tickets away for free. I was a little surprised and of course suspicious by this statement and asked the man why he was offering them to me. He then told me that he was going to see the game as part of a big date, but the lady stood him up and was a no-show. He didn’t want to go to the game solo (not that I blame him) but he also didn’t want to give the tickets away to someone out of fear they would be scalped. He saw me walking with my son and was confident that we would use the tickets and not re-sell them. I thanked the man for his kind offer and let him know that it was my son’s first game and since I was on a limited budget that day, I thanked him for his generosity. Then I looked at the tickets and they were second level behind first base, row one. Some of the best tickets you could get and they were pretty expensive! Ethan and I had an amazing view of the game, and while the Blue Jays lost to the Marlins that day, Ethan got to enjoy a great game and even met Ace who was posing for pictures with kids in that section of the ballpark. It was a great day at the ballpark, and it made an impression on my son who has wanted to go back and see more games ever since.

My son and I have had some very memorable games at the Roger’s Centre and I personally hope this is just the beginning. When I told Ethan we were going to check out Friday’s game against the Orioles, he was super excited and couldn’t wait to take off for the ball park after school. That’s why I laugh when I hear people say that baseball isn’t popular anymore, because it’s a load of hogwash. The kids do love baseball and Dads are taking their kids to the ball park just like their Dads did and their fathers did for them. The reason why Dads are able to keep this tradition going is because in all of professional sports, baseball is still the cheapest ticket to buy. Baseball is still the most family-friendly sport in North America and for good reason. I personally hope that Ethan and I will have many more memorable Blue Jay games to watch together in the not-so-distant future… hopefully in the postseason, like I did with my Dad twenty years ago.

See you at the ball park!