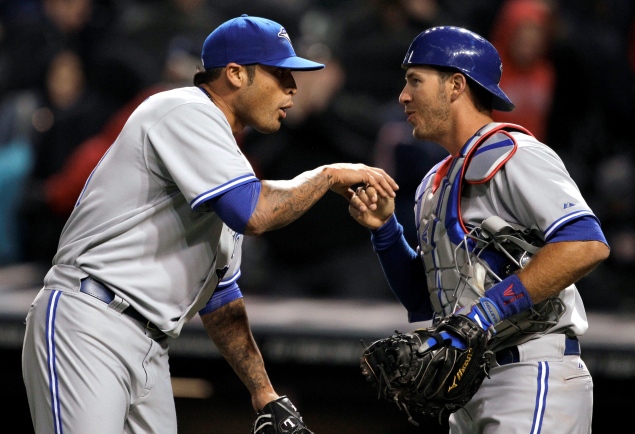 It just is. The sun is shining, patios are opening, school will be letting out and, most important of all, my boys are back on TV and (very soon!) at the Rogers Centre.

As a Jays fan, the season opener kicked off 2012 with a spectacular bang as my boys battled back from a 4-1 deficit to win their game against the Cleveland Indians in the (record breaking) 16th inning. Time was, any game that got to the 8th without the Jays in the lead meant an assured loss, but the current, young, intensely enthusiastic roster has been shattering that tradition with astounding come-from-behind and extra-inning numbers last season.

I didn’t get to tune in until the top of the 9th on Thursday but I was treated to almost an entire game’s worth of extra-inning play as the Jays simply refused to quit, adding to last year’s awesome extra-inning stat with a great first win in 2012.

A monster double off the bat of Edwin Encarnacion brought in 2 RBI in the top of the 9th to tie it up. Starting pitcher Ricky Romero having only lasted 5 innings, the game was a taxing showcase for the Jays’ wonderfully revamped bullpen that culminated in a superb 4 inning showing from Luis Perez (that included the official win and an amusing accident where a badly-placed pitch ended up clearing the benches) and a great (not-quite-official) save by new closer Sergio Santos.

The bullpen having fended off the hungry Indians, Canadian superstar Brett Lawrie kicked off the 16th inning with a long at-bat and a leadoff walk. A couple batters latter, it was my current favourite Jay, JP Arencibia who smashed one over the left field fence to score 3 and set the Jays up to win one half-inning later. The easy star of the game, the overwhelmingly handsome and reassuringly affable catcher had an outstanding defensive game (stopping plenty of stray pitches and throwing out thieves) in addition to his homer that finally put an end to the longest opening day game in the history of baseball.

The standings in the ALE right now have Toronto, Baltimore and Tampa at 1.000 while rich career-winners NY and Boston are still hanging out at .000- always nice to see. After Friday off, the boys take the field again tonight to try and keep their momentum heading into Monday’s Home Opener where I’ll be in section 128 with my scorecard and faded cap, screaming my lungs out.