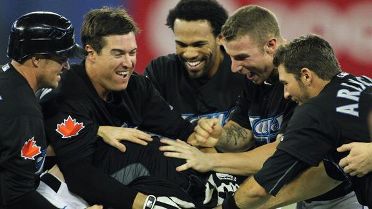 Carrying the Jays into 2012

As the Blue Jays bid adieu to the Rogers Centre for the year and Edwin Encarnacion clinches their perfect record in at-home extra innings (11-0) with a homerun to left field, I thought I’d take a moment to share what I’m most excited about for the team moving forward.

First off, it’s impossible not to mention our all-star and the closest thing Toronto’s had to a legitimate baseball celebrity in years (certainly since Doc left, if not since Alomar). Jose Bautista. Ending the season with a 3 for 4 performance at the plate tonight, bringing him to a .304 average with 102 RBI and 42 homeruns on the season, Bautista may just be a contender for the league MVP but there isn’t a soul in this hockey town who doesn’t see him as the all-sports MVP this year. A real leader in the clubhouse, a really nice guy and a gracious winner, Bautista is the role model player we need to keep for years to come.

Then there’s the sheer youth of everybody else. On the mound, promising young pitchers Henderson Alvarez (21) and Kyle Drabek (23) join more-established old fogies like Brett Cecil (25), Ricky Romero (26) and Brandon Morrow (27). Out on the field, 30-year-old Bautista keeps an eye on 25-year-old rookie catcher JP Arencibia and his movie star looks. There’s 23-year-old Snider and 25-year-old Rasmus, Escobar and Lind are both just 28, the endlessly entertaining Eric Thames is 24. Oh, and there’s this new kid, I think his name… what was it again?… Oh yeah, Brett Lawrie- you might have heard of him, he’s a 21-year-old future hall of famer. It’s this team and their boyish, energetic antics that took down old man CC Sabathia last week. The current power players are on the descent and it’s our boys who are poised to come into their own.

In other news, I’ve picked myself a new favourite Jay. It’s absurd to do so but I work on instinct when it comes to the guy I’ll cheer for through slump and triumph. Back in the spring of 2005 I had a gut feeling about a young infielder named Hill and he became my first true favourite player in the game. With my beloved Aaron traded to Arizona (where I’ll be cheering loudly for him and his teammates McDonald and Overbay in the post season), I needed a new go-to guy.

My first game back at the ballpark post-trade was the introduction of a new outfielder- Adam Loewen. For reasons completely unknown to me I immediately cared whether or not this guy was successful, something I don’t often do. So I had a new favourite. It was only later that I latched on to the reasons I would continue to support Loewen- at 27, the 6 foot 5 Vancouver native had already rebuilt himself from the ground up, leaving his pitching career in 2008 due to chronic injuries and re-starting as an outfielder and first baseman. That’s just damn impressive. Out of league options, Loewen’s two possible fates going into next season are that he’ll appear on the roster or not, there’re no minor league trips left. Here’s hoping the powers that be (I’m looking at you Alex Anthopoulos) see the same things I do.

We’ll start again next year, boys. I’ll see you in April with the stats all set to 0.