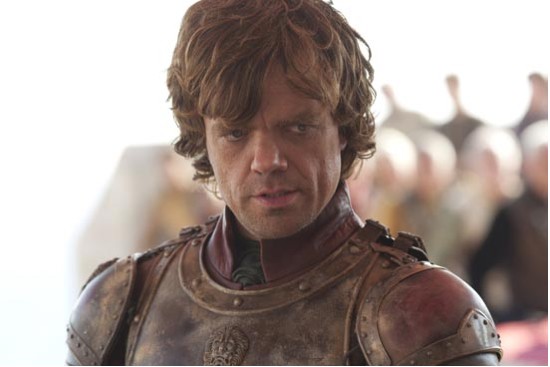 For much of Game of Thrones‘ first season, I lived in an HBO-less cave where I could only read about episodes and critical reaction days after on the internet. It was a tough time, winter-like, if you will. But now, in a curious inverse of the narrative on Game of Thrones, an HBO-fueled spring has arisen, and I get to enjoy the series as it airs.

From the start, you should know, I’m a newly arrived Game of Thrones geek, and though I’ll try and keep my weekly Game of Thrones reviews as spoiler-free as humanly possible, I will also probably let a bit of book-inspired knowledge seep through.

So where are our principals at the start of the second season? That is the question, more than anything thematic, that seems to dominate the season premiere. It’s less of a story, and more of a series of “What We Did Over Our Summer Vacation” catch ups. This is not a bad thing, necessarily. Mainly because what these characters did was way more interesting than the typical “played baseball” and “went to camp” stories.

The start of the premiere is (and always has been) Tyrion Lannister, as portrayed to perfection by Peter Dinklage. In the season premiere, he struts into King’s Landing and immediately disarms the petulant Joffrey and his sister, and sports the best line of the night: “You love your children, Cersei. It’s your only redeeming quality. That and your cheekbones.” He’s also sneaking his prostitute, Shae, to join him in King’s Landing, against his father’s wishes. Which will definitely not bite him in the ass, because as we all know Tywin Lannister is a forgiving and loving father (this is not a spoiler, but come on).

Cersei, meanwhile, is learning the limits of governing through your rotten incest-bred son, and it leads to some sure to be audience pleasing joffrey smacking action (though it’s not quite as satisfying as when Tyrion did it last season). Joffrey is on a particularly hideous roll, forcing men to battle to the death and trying to drown a man in wine. And he’s holding poor Sansa hostage both to Joffrey’s power and to some imperceptibly combustible social rules that require her to denounce her family and smile at her creepy kidnapper.

Jon Snow’s pretty face continues to get him in trouble, this time at the home of an incest-loving Northern who marries his daughters and disposes of his sons. It’s kind of like that classic redneck farmer story, where some men come upon a safe haven but the farmer keeps saying “Just keep your hands off my beautiful daughter” except with more incest and the possible appearance of frozen zombie men.

Danaeryus, looking somehow even younger than last season, now has adorable dragon kittens flying around her, but aside from that stuff is looking pretty dire. She’s wandering around the desert like she’s Moses without the cool facial hair, and even  Jorah Mormount (her faithful advisor) is looking tuckered. Plus she keeps giving sexy looks to her few remaining warriors.

And the Starks, as usual, are mired in the shit of trying to secure victory while maintaining the only morality still existing in Westeros. Catelyn wants to give up Jamie Lannister for Sansa. Robb wants to avenge his father and defeat the Lannisters. Arya would like the people around her not to realize who she is (and though he doesn’t know it yet, so would Gendry).  Brann is being carried around by Hodor, and listening to peasants complain. Theon Greyjoy is leaving the Starks to try and convince his father to side with them against Kings Landing (but what will he do without his favorite whores?). Robb’s direwolf would like to eat Jamie Lannister’s face.

The episode is tied together by two striking visuals, and it’s here that the episode manages to rise above the recap I just laid out. The books are so much more than sexposition and striking violence, and the show at its best touches on these themes. The comet, an omen that no one seems to agree on the meaning of, strides inevitably through the sky throughout the disparate landscapes of the show, connecting all these characters in ways they cannot even dream of. The true meaning of the comet doesn’t really matter; its effect on the characters and the way it links their stories is already profound. It also heralds the idea that time is moving forward, despite each characters scheming and aching.

But the award for most lasting image of the episode definitely goes to the end of episode brutal dispatch of all the Robert Baratheon bastards. Within the TV show narrative, we don’t really know who ordered it, but the seeds of discord and disgust that it sows even within the hardened warriors of the city guard are telling. And a show that starts off the season with some infant murdering is certainly not one about to start pulling punches. In the land of Westeros (and beyond), there are a lot of pretty words and moral harranging. But at the end of the day, it’s a sword that ended the life of Ned Stark. It’s might that rules the land and controls each character’s fate.

In the words of Cersei Lannister, “power is power.”