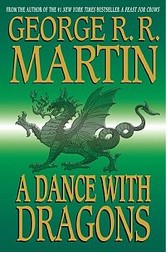 This little Game of Thrones thing sure is exploding, isn’t it? I did a piece a little while ago on Event Books, and next Tuesday’s (ONE WEEK!) release of the fifth book in the Song of Ice and Fire series, A Dance With Dragons, has me in a tizzy unseen since at least the last Hunger Games book. In anticipation, and since, as previously stated, I feel underqualified to judge the series as a whole, I thought I’d just share my love with a list of my top 10 favorite characters. Minor spoilers ahead. Feel free to disagree wtih me in the comments!

10. Eddard Stark- Okay, I know I said minor spoilers, but the following is a major spoiler if you haven’t finished book 1 and/or watched the TV Show: despite only appearing in book one, Eddard “Ned” Stark provided the foundation for a series that would continually set up the prototypical hero type and then (in Ned’s part, literally) cut the head off of it. He was steadfast, loyal, intelligent and honorable, so in a Song of Ice and Fire world, he was screwed.
9. Olenna Redwynne (The Queen of Thorns)- although mostly a minor character, given to amusing comments and cunning in the background of scenes involving Cersei, Margaery, or Sansa, The Queen of Thorns is a badass old broad who continually plays against the power dynamic to protect her own interests.
8. Sir Davos- The Onion Knight, as he is called by his colleagues, is as smart as his Lord Stannis is easily led astray, as dedicated to his King as any in his service, and as incorruptible as a Stark child. Who else but The Onion Knight would be willing to become Hand to the King who had just locked him a cell?
7. Jon Snow- That bastard stark spends most of his storyline far away from his more adorable and beloved siblings, yet he is the Stark that most proudly carries Ned’s banner of honor and nobility. In his transformation from discarded pub of the litter to leader of the Wall, Jon Stark is one of the few forces of good in the books that seems able to actually get shit done.
6. Daenerys Targaryens- When we first meet Daenerys, she is a meek 13 year old being given away by her creepy, sister-fondling brother, Viserys, in exchange for an army. But whether it was seducing Khal Drogo, giving metaphorical birth to dragons, or commanding whole armies and outlawing rape and slavery (which may not seem particularly radical toa modern reading audience, but in the land of Westeros was tantamount to a lefty-liberal today declaring free, government-funded pot and abortions for everybody!), Daenerys transformation and reclamation of her crown and power provide the backbone of the whole Game of Thrones.
5. Peter “Littlefinger” Baelish- He’s a creep. He kisses Sansa Stark on the regular because she reminds him of his lost love Catelyn (Sansa’s mother, and who’s husband he also conveniently was complicit in the killing of), despite the fact that she’s currently playing the part of his bastard daughter. Yet his schemes and maneuvers seem to outwit every other player currently on the board, and his demented version of love and protection is one of the most consistent things in a series where you can’t really count on anybody.
4. Jaime Lannister- I hated Jaime Lannister for the first two books. I cringed whenever he or his sister, Cersei, showed up on my page. He was a king slaying, sister-banging, child killing braggart with no moral compass of which to speak. Which is why book 3 was such a damn shocker. When Jaime Lannister got captured by the Starks, and then released by Catelyn Stark (who is the honorary 11th member of this list), Jaime transformed not just throw circumstance and witty dialogue, but by the use of the point of view to explain away his actions. He’s still a sister banging, king slaying child would-be-killer, but he’s also got daddy issues a plenty and a sense of honor that transcends the traditional westeros definition of the word, but none the less governs his (mostly frigging bad ass) actions.
3. Brienne, Maid of Tarth- And speaking of freeing Jaime, his partner in crime as he made his way back to the capital city and his beloved sister was none other than Brienne. She looks like an ox, fights like a man, and feels deeply like a 13 year old girl, and she’s also a pretty damn unique creation. Her banter with Jaime throughout book 3 was a series highlight, and as she attempts to track down Sansa and Arya Stark throughout Book 4, her tales were the most consistently entertaining.
2. Tyrion Lannister- Tyrion was an easy favorite early on in the series. For all of books 1 and 2, he’s the one human face among the monsters that are the Lannisters. He bonds with John Snow,takes pity on Ned, and fully intends to stand by his promises to Catelyn. But around the time his nose gets chopped off, he gets married off to Sansa Stark, and he HUGE SPOILER ALERT goes all red-rum on his own father, we realize there’s a lot more to the littleest member of the Lannister family than just comic relief.
1. Arya Stark- and in first place, the most obvious choice, Arya Stark. From sword-playing tom boy, to actual boy, to in-training assassin, Arya’s storyline has been mostly apart from palace intrigue or familial dynamics. At all of 11 years old, she has forged her own path through the dangerous outreaches of Westeros, and managed on the way to hit Prince of douche bags Joffrey right in the face, form an unlikely kind of friendship with The Hound and finagle her way into a selective sect of assassins known as the Faceless Men. In other words, Arya is the type of bad ass all the other characters can only dream of being.