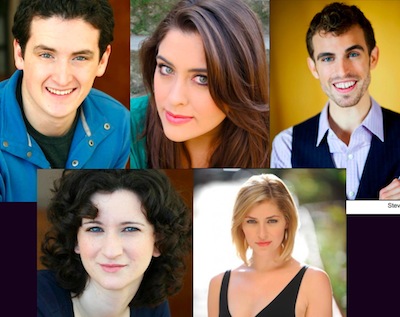 Boston Conservatory (BoCo) has always held a special place in my heart. Factory Girls was one of my first reviews for this site just under a year ago. I have gone to see a few BoCo shows since then and I’ve been consistently impressed with the quality of work produced, from the singing, to the dancing, to the professional atmosphere. I was fortunate to catch the first MFA class’s solo cabaret performances. A mixture of breathtaking songs and candid conversation with the audience showcased five members BoCo’s MFA class, advised by Fran Charnas, BoCo’s Graduate Musical Theatre Thesis director, and accompanied by Steven Ladd Jones.

Appropriately titled “Everything I Learned, I Learned from Disney,” Maloney kicked off the show with his quirky takes on many classic songs. Honestly, I couldn’t have picked a better star to open the show. Maloney is engaging, charming, and fresh. While others may feature more technically and stylistically challenging songs, Maloney features his comedic skills, equally superior poignant confessions, and surprising energy. He keeps his cabaret moving at a wonderful pace, and varies the tempo to whet his audience’s mood for more Maloney. His strongest moments, ironically, were his most serious songs, including “Proud of Your Boy,” an underutilized and cut song from Aladdin. I would love to see his cabaret expanded, especially since his thematic storytelling was one of the strongest among his classmates.

Not So Secret Diva

Marissa Roberts showcases her passion for modeling, fashion, and wigs in her cabaret, “Secrets of a Fashionista.” While I loved her strong message and her ability to reach out to her audience, especially through more pop-song hits, I felt Roberts delivered a mediocre performance. A stunningly beautiful girl with a sass and particular charm about her, I was instantly drawn to her strong dialogue with the audience. Her song selection, while engaging, failed to deliver. Her strongest number was her closing, a tribute to Gaga, but even that powerhouse number failed to show heart. I think Roberts felt passionate about her topic and her song choices, but she needed some connection to her audience. I would love to see her improve upon her cabaret with more practice and sharpening of moments. I think the strong showing from her classmates made her cabaret seem less than it was, despite her apparently superior voice and stage presence.

Leora Bernstein features some of the evening’s most dynamic numbers in her “The Wizard, the Jedi, and I: How I Found Magic in the Real World.” Bernstein is a powerful performer, candid and strong in her delivery, unapologetic in her comedy and virtuoso in her vocal talent. The strongest part of her cabaret is her wide range of styles and her ability to tie them together up with a bow into a crisp journey into her life. Her voice is stunning, especially in a personal favorite, “Once” from Brooklyn. Equally impressive was her original arrangements of many of her songs, even featuring her own piano skills in a rather hilarious moment. My only complaint was that her cabaret went by too quickly. I felt like there was something more I wanted her to tell me, and I hope in future drafts and performances that she explores of the magical world she lives in.

Not all stories are as crisp and clean. Steven Cosnek is one of the evening’s strongest singers. His range and musicality is breathtaking, stirring applause and cat-calls in numerous numbers. His presence and training is nothing short of impressive. Yet, his cabaret is unmoving. “Help Wanted: Inquire Within” is both a young man’s journey into the adult working world and a young lover’s adventure into dating men. The confusion of whether he needed help finding a real job or a real husband, I was left inquiring what Cosnek wanted to leave his audiences hoping he found. I liked his use of jobs to explore his dating life, but the story felt like a late second draft without enough polishing and paring down from an original story. Cosnek carried the show off with his charisma and willingness to take chances with gusto, but I think he’d really soar with another draft and thinking about his true focus.

The Girl Can Wail

Hayley Lovgren impressed with the predictable: a cabaret of songs and roles she’ll never play in her future career as a musical theatre performer, in her “Big, Tall, White Girl: The Career I’ll Never Have.” Lovgren is brassy and fun, especially in her renditions of many hit musical theatre songs like “Tomorrow” and “If You’ve Got It, Flaunt It.” Her storytelling is also surprisingly effective; she takes a cliché theme and idea and makes it her own struggle through her limitations. I wish, however, she included more heart. I kept seeing barriers in her frustrations, annoyance, and sadness about the career she’ll never have. Her potential with this theme, especially given her strong ability to carry many iconic songs, is boundless. Again, I think an expansion could help, but I’d also like to see more candid confession with the audience. At once humorous, her moments could also be heartbreaking as we realize the irrational limitations we place on performers today. Fortunately, many of my own ideas about her cabaret are after-thoughts because Lovgren is just too much fun when she’s onstage. She is a natural cabaret performer and you forget that her show is written and rehearsed; each moment feels real and electric. She never failed to surprise and delight, leading the audience to a powerful rendition of “Rose’s Turn” from Gypsy to conclude the evening’s performances.

BoCo thrills and impresses again. I’m very sad that I will have to say good-bye to this talented group of young performers as they travel to Chicago, New York, and other faraway cities to begin their careers. I’m certain that I’ll read about their fantastic journeys into a life of music and love, and I can say that I knew them just for a moment through a wonderful night of cabaret. In case you missed this weekend’s performances, you can catch a new group of stunning individuals next weekend, April 20 and 21 at 7:30pm, for an entirely different night of cabaret performances! Congratulations, BoCo MFA Class of 2012!