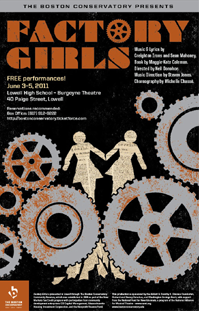 The Boston Conservatory Theater Ensemble has never failed to impress me, and its recent workshop production of Factory Girls proved no exception. The level of effortless performance delivered time and again by their students always seems to come as a surprise. Guided by an excellent faculty who recognizes the importance of the theatrical process, the Masters candidates at the Boston Conservatory always come through with a successful product. Factory Girls seemed like a logical choice for a strong class of women working towards their M.M (Masters of Music); with roles that ranged from demure to brazen, the female ensemble was tasked with the daunting challenge of representing the dreams, background and real lives of the girls who worked the Lowell Mills.

Based on “The Lowell Offering” and “The Voices of Industry” (periodicals written by women working in these local mills in the early 1840s), The Factory Girls tells the fictionalized story of one representative textile mill- an homage to the real women who lived the compelling tale. Composer/playwrights Creighton Irons and Sean Mahoney use the powerful pop/rock score as a vehicle to showcase the hope and angst of their characters. With a limited book, the lyrics propel the story forward.

From the opening number, Margaret Lamb (Lucy) spun a marvelous tale through monologues of exposition filled with empathy for her fellow girls and yearning to help the audience understand. I would say that she was extraordinary, but the rest of the cast proved just as talented with their respective roles. Hayley Lovgren (Harriet)’s heart-wrenching and pivotal “Father of ‘76” moved me to compassion and understanding for her background and philosophy. Marissa Rae Roberts (Sarah)’s acting was also remarkably poignant.

However, it wasn’t until I talked to the performers after the show that I realized the characters of Harriet and Sarah were supposed to be best friends- and therein lies my biggest complaint about the production. As an original work that is continually being unraveled and reassembled by the skillful team of writers, the character development could use some additional time and focus. Some of the female characters played as well-defined archetypes with pre-assigned solos to sing, instead of having the music rise organically from their need to tell their story. Meredith Myers and Leora Bernstein (Louisa and Clementine, respectively) most notably rose above this limitation, creating meaningful character arcs and fiercely belting the solos offered to them. Four men from the M.M. program also featured in the production, bringing gusto and skill to their roles as the overseers of the mill, but they were sadly underused. The chemistry among the ensemble was strong but lacked any personal connection between characters, and the potential for some strong arcs was lost in the interweaving relationships in the cramped dormitory.

The set was beautifully minimalist but the lighting was both stunning and disappointing. With a show that shifts locations in almost a dream-like manner, I expected a heavier focus on lighting to enhance the scenes and spectacle. The choreography, though limited, added character and verve to the rock musical’s score, most notably in the repetitive and compelling “Machine.” The most helpful technical element, however, was the costumes. With limited character development to differentiate the 10 female characters, memorable and personality-distinct costumes helped me keep the characters straight. Without the patterns of colors from dull pinks to flashy blues, I would never have remembered who sang the sultry “Rusty” or the soaring solos in ‘The River.”

I look forward to future edits of Factory Girls as the writers improve from workshop to production. I also hope to attend more Boston Conservatory Theatre productions as the talented actors give me hope for the next generation of musical theatre performers.

This review was written by My Theatre’s newest staff writer Brian Balduzzi.
Welcome to the team, Brian!