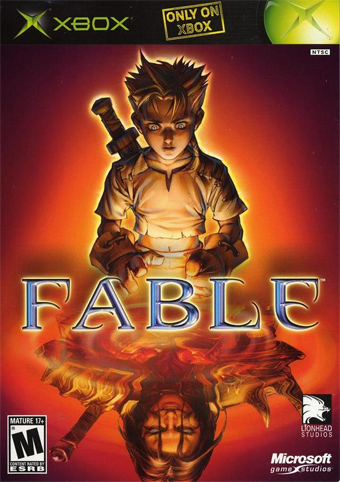 I have played all of Lionhead Studio’s Fable series so far. I heard about the upcoming Fable: Heroes and was confused and sad. It looked dubious. I thought to myself, “Oh man the series has really gone down since…” and I couldn’t at first decide which Fable game I enjoyed best. So, instead of being down on the future of Peter Molyneux’s credibility (the creator of the Fable series and renowned for promising things that never appear), I want to look back on why I loved playing these games.

Fable: adorable RPG with the overused motivation of “my family was killed and I will live at this academy until I can avenge them”. It had a cliché but fun-to-play story. The controls were a little loose, and the map was both mazy and small (I’ll explain this oxymoron in a moment) but the combat was fun and variable. I said maze-like and small at the same time because there were forest parts 1-10 between goals that all looked identical, and if you chose the wrong ‘door’ you had to trace back through the winding paths to try a different exit – because traipsing through the woods was simply impossible while traipsing through the woods. Sigh. However, you’d end up doing this intentionally when you realized you needed to grind for experience orbs.

On the good side: this was the first game I ever played (yes, I joined the game-playing community late, deal with it) with a dominating alignment system. I mean dominating in that it was the deciding factor in my play-style. It was fun, but a continual weak point of the Fable series for me. It means that your morality had better line up with Lionhead’s, and of course there is only absolute good and absolute evil. Fable III was particularly bad about this, but I’ll get to that in a moment. Let’s move on…

To Fable II. You get a puppy! That was my favorite addition to the series. The big down-side for me was the animation style. They went for better graphics but landed in that desert of not-quite-realistic and not-quite-pretty-enough to be intentionally cartoonish. The morality system intact, I decided to be as evil as my scrunchy black heart could muster. Unfortunately the standards I set for myself were tested in the tower of terrible (Tattered Spire) and I ended up close to sainthood after leaving. So I gathered my puppy and went to fight the Big Bad. I loved this game. Aside from the minor irritants of morality and aesthetic appeal it was addictive and fun.

But then Fable III happened. I started as a princess! And you get a fun scene where you choose whether the cute boy is your best friend or your boyfriend. Of course, I went for the smoochies. It was the first Fable game where you had a romantic relationship with someone who had a personality. I resolved to center my character around this, and it paid off big time. This game really got it right. It embraces its rails instead of pretending they aren’t there and leading you into disappointment. It makes a distinction between ‘goodness’ and popularity, and it’s difficult to remain a popular ruler.

Most importantly, this game has the coolest menu system I have ever seen. You never leave the game. When you press the menu button, you are transported to a home base where you can go look at your trophies on the wall, run up and down your big pile of money, try on clothes off the rack, and pick your weapon off the display. There has never been a more satisfying feeling than walking over and picking up the sword you want to use, or dyeing your hair funny colors just to see what your butler will say.

Bottom Line: Fable III wins on the grounds of giving the player a cool butler to compliment them on their clothing choices and letting them marry their childhood sweetheart. But I really did enjoy them all.