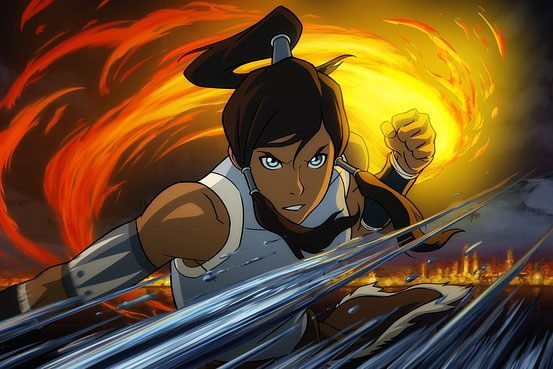 Pilot Watch: The Legend of Korra

I just walked around my house, hyperventilating with joy, saying, “ohmygodohmygodohmygod” for three straight minutes.

I’m fine… now. I was just attempting to process my love for The Legend of Korra, and my excitement for this season (Book One: Air!).

Wait, “What’s The Legend of Korra?”

Okay. Let’s start at the very beginning (a very good place to start).  The Legend of Korra is the sequel to a widely successful children’s show called Avatar: The Last Airbender (#notjustforkids). If you are thinking of tall blue aliens or an M. Night Shyamalan movie, I am sorry for your suffering. Unfortunately, the M. Night Shyamalan movie was supposed to be the live-action version of the show that I’m talking about but …Mistakes were made. That movie is not canon and I often happily go about my life pretending it never happened (like, I think Episode I of Star Wars is more true to its series than the Last Airbender movie is. And I HATE Episode I). You say “denial,” I say “pah-tah-to.”

Anyway, wipe tall blue aliens and bad adaptations out of your mind. Avatar: The Last Airbender is an animated show about a fictional world with four nations—each represented by a different basic element (Earth, Air, Fire, and Water. Not Carbon, Oxygen, Hydrogen, and Nitrogen) and color scheme/visual interpretation. This world is populated by regular people and people called “benders,” who have the ability to manipulate one of the four elements. The Avatar is an extra-special once-in-a-generation bender who can manipulate all four elements. In Avatar: The Last Airbender, the four nations were in the midst of a 100-year war (and the Fire Nation was kicking butt and oppressing the heck out of people), so the 12-year-old Avatar Aang’s mission was to save the world and bring harmony to the four nations.

Oh, and one thing I forgot to mention: If you have not seen this series, you are missing out on what is hands-down my vote for BEST ANIMATED SERIES OF ALL TIME. Yeah. I’m sticking by that. Of. All. Time. And this in not your average animated show—this is spectacular, beautiful, well-written, and arc-driven TV regardless of genre.

Anywhoo… The Legend of Korra takes place 70 years after the events of the last episode of Avatar, and focuses on the next Avatar (it’s a reincarnation/Slayer-esque thing), a 17-year-old girl named Korra.

The episode starts with the same opening format—Earth, Fire, Air, and Water—and a brief intro to what’s happened to the four nations in the past 70 years, but we are definitely in a new series. Naturally, beloved characters from the first series are out of the picture (with the exception of Katara), and the world has changed significantly. Like, the four nations got industrialized FAST. What used to look like medieval Asia now looks like a fully industrialized city in the 1920’s-30’s. It’s dizzying, but they do it well—and Korra is discovering the city at the heart of this new era at the same time as we are, which is always comforting. The art direction is the same (in terms of origin-nation color schemes and THE FIGHT SEQUENCES ARE STILL AMAZING), but we’re dealing with a new era, and new problems endemic to that era. On top of all that, Korra is older than most of the main characters from last time, so the tone is a little more mature than in Avatar. And now that the four nations are at peace, the issues of the series are going to be much more subtle, political, and ambiguous than “there is a universally-acknowledged singular oppressor-figure, we should stop him.”

Even in the first episode we get a taste of that—we’re introduced to the mysterious Amon, and his Equalist movement—a movement claiming that non-benders are being treated as second-class citizens, and arguing for the neutralization of bending powers. But despite the slightly more grown-up tone, that perfect balance of drama and wacky cartoon humor that I loved so much in the first series still seems to be intact (while I haven’t seen the ubiquitous cabbage-seller from last series, we’ve already met a crazy-friendly homeless man who lives in a bush, and a lot of hilariously rambunctious kids). And for the die-hard fans, there are some beautiful moments of loving (but quick and efficient) homage to the original series. I’m already loving the approach to the new series—it feels like a natural extension of the story and the world.

But even with all of that gushing you just read, I don’t think I’d be able to watch the series (or enjoy the pilot) if I didn’t love our hero—Avatar Korra. Yeah, she’s a 17-year-old girl, and yeah, she’s The Chosen One, and I know that sometimes that kind of set up (teenage + chosen to save the world thing) can lead to unlikeable characters, but KORRA’S WONDERFUL. I mean, she’s not perfect—she’s a 17-year-old girl and, more importantly, a person. She feels like a fleshed-out human (and by all measures, a pretty good one at that). Okay, so she’s got a bit of an attitude. But she walks that line of cocky/self-assured, she’s honest about her short-comings, she apologizes when she realizes her mistakes, she’s got a perfectionist streak a mile wide, and she’s fun. She’s exuberant and funny, she loves her polarbear-dog, she loves bending/martial arts, and when she wins, she celebrates, and feels proud of herself, and… all-in-all, if I could flip my time-turner enough to re-do my 17th year of life, I’d hope that I could be even the tiniest bit like Korra. And I’m trusting Michael Dante DiMartino and Bryan Konietzko (the creators of both Airbender and Korra) to keep to their usual standard of wonderfully humanizing and empathetic character writing where the other characters of the series are concerned. I bet money that I’ll end up loving the whole cast (it’s happened before).

Clearly, I have a strong attachment to this show and its predecessor. I’ll admit it—I’m in love, I’m star-struck, everything is flowery poetry and excitement—I’m not being as critical as I could be. Let’s be clear: It’s not a perfect episode. There’s a lot of cleverly delivered (and less cleverly delivered) exposition, there are a few potentially-funny moments that fall flat, and it’s never going to be an HBO drama (in any way)…but it’s true to its roots, and it’s exactly the show I was waiting for. The best thing that happened to me today was that I sat down and watched the first episode of The Legend of Korra, and it felt like I was coming home.

I CANNOT WAIT FOR THE REST OF THE SEASON!

So, I guess theoretically, the season premiere is supposed to be on April 14th, but …. the internet is leaky. And once the producers/Nickelodeon realized that they couldn’t squeeze the toothpaste back into the tube, they officially posted the season premiere episodes online. So now you can watch the pilot—Book One: Air, Chapter One: “Welcome to Republic City”—at nick.com

PS:  If you’re like me and can’t get enough, the second episode—Chapter Two: “Leaf in the Wind”—is also up on nick.com. IT’S LIKE CHRISTMAS!