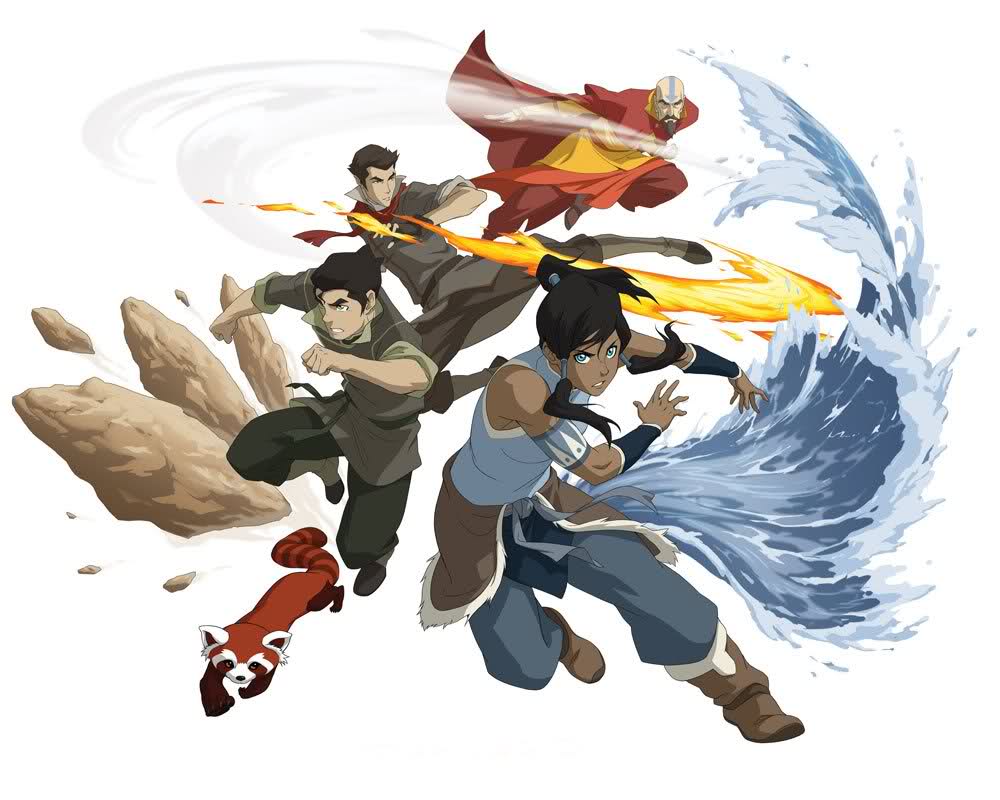 Today I watched the third episode of The Legend of Korra (it’s called “The Revelation”).

Here were all my thoughts and feelings*:

*WARNING: this is essentially going to be a live-blogging thing. Except … not live (dead blogging? Rehearsed blogging? …Undead blogging?) I’ll stop now. But see?! This is what it’s going to be like. Pretty much the whole time. Also, IT’S GONNA GET CAPSY UP IN HERE. Okay. Warning over.

-Ooh, ooh, intro! Yes, I still get gleeful (in a strictly non-musical way) about the intro. #noshame

-You know, call me crazy (I’m sure you already do), but I like the old-time-y newsreel recaps.

-Amon! He’s gonna be our Big Bad and I’m hoping it’s going to be complicated and awesome.

-Oh, and the earth-bending brother is clearly the sensible/best one.

-Oh, the firebendingone(Mako? I’ll get there) and Korra are fighting. They’re totally in love. Although I thought that about the last FireNation/WaterTribe pair too and the writers… didn’t (don’t worry, I’m not actually a hardcore shipper/crazy person).

-But I think that they’ve actually said in interviews that they’re doing a cheesy teen romance in this one. So I’m going with my gut (also the shipwars* may have made them feel obligated to make a forreal fire/water pair. Idk)

-*If you don’t know about the shipwars, you are happier not knowing. No worries. DON’T GET EMBROILED!!! IT’S DANGEROUS OUT THERE!!! PEOPLE HAVE DIED!!! That’s not true (probably). But many feelings have been hurt and interwebs reputations ruined. Just don’t do it.

-Who the heck are you?

-I’m with you, earthbending brother. Food is good. And necessary. And you are a growing boy. Possibly with a red ferret on your shoulders?

-YOU’VE NEVER NEEDED MONEY?! YOU’VE ALWAYS HAD PEOPLE TAKING CARE OF YOU?! (is it my imagination, or is this a commentary on my generation?)

-…And moody firebendingbrother. ….le sigh. He’s not going to be my fav, is he?

-Oh, you’re the cutest, Earthbendingbrother—BOLIN!!! YOUR NAME IS BOLIN!!! Thankgod. Now I can just type five letters instead of a bajillion (math is hard)

-“I’ll figure something out. I always do.” Mako, I know you’re trying to be tough, and grown up, and street-smart, but… you sound like a brat. #accuratecharacterwritingforateengageboy

-Also, your fake mustache is splendid and majestic.  And your lines/voice acting are wonderful.

-WHY WOULD YOU ACTUALLY TALK TO ANYONE NAMED SHADY SHIN?!?! (this is a real thing that is happening. there is a gross-looking swaggering man named Shady Shin)

-Pick up your little mat and fire ferret and walk away!

-Oh, don’t be an enforcer. You’re too much of a marshmellow.

-ANYTIME ANYONE FEELS COMPELLED TO VOLUNTARILY USE THE PHRASE “NOTHIN’ CROOKED” THE THING THEY WANT YOU TO DO IS ILEGALL!!!!!

-Bolin, even when you’re being dumb, your face is really precious.

-Wait, Mako’s dayjob is as a human blowtorch?

-Also Bo has favorite dumplings. Of course he does.

-Not like it was hard to guess but still.

-Aw, Korra’s being plagued by the fake/adopted little sisters she probably never wanted.  Except I like whatsherface. The calm one who likes books (duh).

-“Is that the handsome firebending boy who drives you crazy?”

this is a real question that has been used in real life. A+ for annoying kid sister accuracy, writers.

-“Hey CoolGuy, let me help you.” Show self awareness. Love it.

-D’oh. They’re going to be grossly, sickeningly cute together.

-Scoochi is a totally an icorrigable street rat/extortionist. Me gusta mucho. Also, his name is Scoochi (I might be spelling that wrong) and he looks 7 years old. 8 max. And he’s the best exposition fairy in all of Republic City (still a really really really dumb name for ANYTHING, guys)

-“ALL THE TRIADS ARE RUSTLING UP FOR SOMETHING REAL BIG”!!!

-Mako sneaks. Korra saunters. And then she kicks down the door. #myhero.

-Uh-oh THEY HAVE BOLIN!!! (I’m calling it now. These are the Equalists, trying to take away Bolin’s bending powers/lure Korra?)

-The Equalists have really cool motorcycles, and are uber ninjas, apparently.

-Also, Korra, didn’t you learn anything from the last time you wrecked the city?

-NAGA AND PABU TO THE RESCUE!!! Hooray for animal friends!

-The Equalists are chi-blocking bastards! But they’re also on the Batman end of this argument—no inborn powers (although not Pro-Justice either). Must be tough in the streets. And I was right about Bo, not so much on the Korra-luring yet. But mark my words!

-I might make a drinking game out of this.

-TROUBLED/FORLORN/STOIC(?)* LOOK OFF INTO THE DISTANCE!!!

-Mako, get over yourself.

-Korra, you’re a great fighter. Not so much on the detective-ing.

-TRAGIC LIFE STORY OF HARDSHIP AND STRUGGLE COMIN’ UP!!! MY MOODY TEENAGER SENSES ARE TINGLING!!!

-“What! Are you some kind of criminal?!”

Uh, girlygirl, he just said that he worked with the Triads. Yeah. Your boy’s a crim.

-“You don’t know what you’re talking about!”

-“I just ran numbers for them and stuff”

-“WE WERE ORPHANS, OUT ON THE STREET! I DID WHAT I HAD TO DO TO SURVIVE AND PROTECT MY LITTLE BROTHER!”

-D’oh, they’re sleeping/drowsing on each other! Called the sickeningly cute thing.

-Although, to be fair, good startle responses from both of you.

-“YOU CANNOT SILENCE ME, AVATAR!”

Maybe not, but she CAN destroy your megaphone.

-Oh, and her bending’s back. And his flyers are everywhere.

-“NO ONE KNOWS WHAT THE REVELATION IS. BUT MY GUESS IS, IF YOUR FRIEND’S A BENDER, THEN HE’S GETTING WHAT’S COMING TO HIM.”

-Mako + Korra = 1 smart cookie and puzzlemap. Separate? … not so much.

…look, sometimes I regress into a 5 year old. Excuse me. Sometimes I’m this many *holds up open hand*

-Okay, so this is part rock concert, part televangelist special, and part revolution.

-WAIT, YOU PRACTICALLY HAVE THE SAME ORIGIN STORY AS MAKO!

-Uh, btw, Zuko walked around bare-faced with some pretty impressive burns like a big boy (except for the blue spirit. Man, I loved their spirit alter-egos). So guessing the mask is not just a vanity/grossness issues.

-K and M, your hats are horrible. Except, Mako, yours sort of looks like a captain’s hat. I guess that’s okay. So Korra, it’s just you. Your hat is terrible.

-What is the revelation?

-THEY HAVE GRANTED YOU THE POWER TO PERMENANTLY TAKE AWAY BENDING?!

Okay, not going to lie, assumed a little bit. Otherwise how could you really be the Big Bad?

-(although btw, minor flaw, Amon, but the last person who could do that was a bender. Avatar Aang, to be exact.) #readytobetmoneyonsecretidentitytwist

-“YOUR FIREBENDING IS GONE. FOREVER.”

-Plan! Also, goodluck handshake! Yo, they are so falling in love it’s not even funny. And they’re going to be snarky about it. So I’m on board.

-“What are you doing back here?”

Bo, you’re the cutest ever ever.

-Bo, don’t give in to your marshmellowy center! Be fierce! Protect yourself!

-Both bros down for the count!

-It’s cool, KORRA TO THE RESUCE.

-Does anyone else think that Bo’s scream sounds kind of like a rooster? …No? Just me?

-“Let her go. She’s the perfect messenger to tell the city of my power.”

-Also, Bo is so the Sokka of this season. No wonder I love him.

-Hey Tenz-man, thanks for bringing that up. I’m glad one of the characters remembered (and actually, you’re the perfect one to do that).

I have to wait a whole week for the next one?!!!? #spoiledbyinterwebs.

Okay. I’ll be back next week with another Korra diary entry.