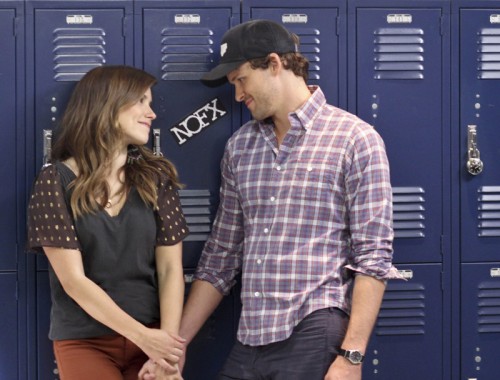 Goodbye and Thank You, One Tree Hill

My love for One Tree Hill has been well documented on this site. It’s one of the very few shows remaining that originated on the groundbreaking WB and is the longest running current series that I’ve watched from the very beginning. I love One Tree Hill, I’ve grown up with One Tree Hill; even when it was terrible and telling stories about killer nannies or kidnapped basketball stars, I still loved One Tree Hill. So tonight, on the occasion of its series finale, after an astounding 9 years on the air, I’ll be live-blogging until the very last frame and the appearance of “Created by Mark Schwahn”. I’m hoping for some nostalgic season one callbacks (last week’s episode was great for that), fun self-awareness in the form of Julian’s show-within-the-show (a Dawson’s ripoff, but I wouldn’t have it any other way) and maybe a few appearances by former stars. But, more than anything, I want to hear Gavin DeGraw’s theme song again, because One Tree Hill just isn’t One Tree Hill without “I Don’t Wanna Be…”.

8:00- Here we go. We’re starting with an hour-long special with the cast as they look back over the show’s 9 years. Awesome. I love clip shows, especially of really long shows. Aw, look, it’s 19-year-old James Lafferty. Oh, Nathan!

8:02- Did you know it was originally pitched as a film that was “Cain and Abel on a basketball court”?!

8:05- Apparently the throughline we’re going with is “the underdog show”. Okay, well, it’s too pretty and too stylized to really sell that but the show was coming right after the massively popular and somewhat similar Dawson’s Creek and was almost canceled about 8 times, so…

8:06- Anyone else think it’s kind of cool/weird that the One Tree Hill showrunner is a devoted middle aged white guy? Thanks Mark Schwahn, for your dedication to your crazy characters.

8:09- This is What I’ve Been Saying! At least in the beginning, One Tree Hill was incredibly literary. The pilot ended with a quote from Shakespeare’s Julius Caesar.

8:10- THAT WAS MICHAEL JORDAN’S HIGHSCHOOL GYM?!?! These people are right, finding James Lafferty was one of the keys to the show. Chad Michael Murray fell by the wayside quickly, Nate held down the show.

8:19- The One Tree Hill tour, what a cool idea! Glee gets way too much credit for things OTH started. The OC started at the same time, they were great with music too.

8:20- “They’d go from junior high to the end of college; to think that this show was an ally to them in that time”… too true. “We’ve really created bonds with the people who watch the show that I don’t think any other show has ever done”… also true.

8:29- You’re right, Mark, it WAS a testament to the network and producers that they let you do the school shooting. That was The WB, that was what The WB was all about- risk and innovation. “It gets better” was a One Tree Hill creation.

8:30- “If that one sentence reaches one person at the [right time]…” Mark Schwahn understands the real definition of “a win”!

8:31- There are way too many commercials in this special.

8:41- It is so great that they got a final season to wrap up and do a proper finale.

8:41- “Just because I’m not sitting down and writing ‘Fade In’ every week, I feel like [the characters] are still there”. What a lovely, writerly sentiment.

8:44- The cast predicts that I will cry. I’m pretty sure they’re right.

8:45- Man, turning the lights out on the river court would have been so tough.

8:46- “I’ll owe everything I accomplish from now on to this show”, gosh I hope James Lafferty continues to work from here on out.

8:47- “Sophia Bush series wrap”, man that was sad. She was such a key to the series, a rock for the floaty story. Man, how am I already crying?

8:48- “I feel that everybody could sort of tell” that Mark Schwahn cared so much about the show? Oh Yeah. It was a show made with love. That was very clear. Always.

8:48- Good call ending on the lonely basketball figure across the bridge…

8:49- WE’RE STARTING EARLY. No theme song but the title is starting over light instead of dark.

8:50- Nate is watching himself as a young guy play on the river court. Odd. But kind of nice.

8:51- All the great full-series characters are watching themselves. A Beautiful mix of old and new footage. Well done.

8:53- How meta, Haley talks to the OTH audience through the Tric audience.

8:59- Trying not to look at the “Guest Starring” list so I’m happy/surprised to see people.

9:03- Felix Shoutout! Fantastic! I love that Chase doesn’t know who he is. And that Chris hates Chase’s drink, bout time someone said something!

9:04- “You named your guitar after my wife?” nice callback to early Chris Keller.

9:06- “House band, blues riff, F sharp minor”, badass, Chris, badass. At least we’re not pretending the band spontaneously knows the song like they do on… other shows.

9:14- Nate gives great advice. And makes a point of not being season one Dan. Lovely.

9:18- Hey Mouth, start a young broadcasters program or something with that money. Something Jimmy-related, youth-related and sports-related. You have 42 more minutes to decide.

9:19- Why are we wasting time on Chase and Chris and those stupid twins? Just bring Mia back instead.

9:20- Ah, Lucas’ copy of Julius Caesar from early in the series.

9:21- “Do you remember what you were doing when Tric opened?” there’s that question again.

9:21- Oh man, that Grace line was dumb. But I like the idea of Brooke and Haley’s “own little corner of the world”.

9:25- Wait, we’re back at Tric right after Chris’ set. What is up with this timeline?

9:26- Chris Keller makes me laugh. So does Haley James Scott. They’re cute, why were they never together this season? Oh yeah, Nathan got kidnapped.

9:27- YAY! Gavin DeGraw is here! I wish he were singing the proper theme song, but still nice and appropriate to see him.

9:29- The cast all together in one shot- how lovely. I see, it’s all through flashbacks. Also, you can’t get married that spur of the moment, you need a license and a three day wait. But Man, that kid is cute. Slow motion, on the other hand, is always weird.

9:39- Nathan and Haley out in the rain. They’re so cute. To think he only asked her out to bother Lucas.

9:40- Julian, you really didn’t have to buy Brooke her old house. She has a house. Though I like that you honestly consider yours “the best” family. Though it was a silly gesture, I love Julian. I cannot stress this enough.

9:42- Oh good, Jamie’s back. He hasn’t been here much tonight. I love Haley’s wish box- a great thing to call back and pass on to Jamie. Awww, he wants to break Nate’s scoring title.

Okay, time to tune out for the ending- catch you when my beloved show is gone for good!

10:02- I’m back. And, predictably, in tears. Though it wasn’t the actual episode that did that. The episode was sweet, predictable and nostalgic but, (aside from the meta genius of the moment when Gavin DeGraw finally played “I Don’t Wanna Be” and the characters took over singing along from the audience to the literal theme song to their lives) it was far from a great series finale (for that, see the Friends ending, Boy Meets World, The OC, Mash, or Mike’s final episode of Spin City). I cried in the beginning, when, specifically, Sophia Bush and James Lafferty looked back on how the series changed their lives. Then at the end, when Mark Schwahn’s name came up and there would never be another moment of One Tree Hill. Because the magic of One Tree Hill was never in its cleverness (I could see that Scott jersey ending coming a mile away), it was in its reassuring presence, its heartfelt sweetness and honest to god faith in the good of the world. That’s what that ending was. I would be surprised if One Tree Hill itself moved many people to tears, but the absence of it certainly will.