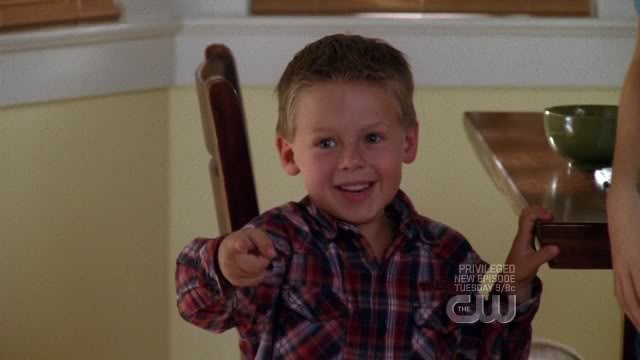 Before we announce the winners of the 2011 My TV Awards, we’re proud to present the My TV Nominee Interview Series.

I love One Tree Hill. Always have. Those first 4 years were great, but it wasn’t until the season 5 time jump that the show really was at its best. The 4 years we missed saw the kids graduate college, Haley become a teacher, Lucas publish a novel, Nate injure his back and Brooke start a company, but the biggest thing that happened in those 4 years was that newborn Jamie Scott (the son of Nathan and Haley- born on graduation day) grew up. When we met older him in season 5, Jamie was a smart, happy and hilarious kid with the cutest face on TV, played with aplomb by the wonderful Jackson Brundage. In the 5 seasons that have followed, Jamie has become a highlight of the series and the best young breakout star since the CW’s creation. With the show merely 3 episodes away from a final ending, Jackson took the time to talk to us about the show that made him one of our Best Young Actor nominees, what it’s like to get chased through a cornfield by a murderous nanny, his life on-set with his co-stars and just how much he loves Jackie Chan.

Who are some of the performers who’ve always inspired you?
I really like Jackie Chan and Chris Tucker.

Because of Rush Hour?
Yup.

How did the role of Jamie come about?
Well, it was basically this last minute thing. They had like 2 weeks to find a kid before they started shooting. So, we just went out for it because we quickly got a call like “they wanna see him”. So we got the call and went up there [to the set in Wilmington, North Carolina] and I guess it just happened.

What was it like jumping into a show that had already been running for 4 years?
It was pretty cool. It was my first big experience on an ongoing TV show. It was pretty cool meeting everybody and they were all really nice. So, pretty fun.

You work pretty closely with a lot of the show’s stars. Who are you closest with?
I don’t really know. That’s a hard one because I hang out with… well, I did hang out with everybody, so I don’t think I have a favourite.

What’s your relationship like with your on-screen mom and dad [Bethany Joy Galeotti and James Lafferty]?
They’re the nicest people in the world. When we’re on break I’ll throw the football with James. Then I’ll sit down and talk to Joy. It’s basically just a normal relationship; it’s really nice.

As Jamie, you’ve been kidnapped, almost drowned, chased around by murderers- what’s the craziest thing you’ve had to do on the show?
I think one of the craziest things was running through the cornfield. That was pretty fun- there were tons of bugs and stuff, it was really gross.

Your character plays a lot of basketball and last season he got really into baseball- do you play a lot of sports yourself?
Yeah, right now I’m playing some flag football, then I’m gonna play some basketball. So I’m in a lot of stuff right now.

Are you old enough to watch the show?
Oh yeah, I watch it all the time.

So did you catch up on all the early seasons before starting?
Oh yeah!

That was a long time ago, does everyone look shockingly young?
Yeah.

Are you sad to be done?
Yes. I think we’re all gonna miss each other, but it was a fun thing, going for 9 years. It was really nice. It was cool.

What will you miss the most?
Just all the people. The cast and the crew, and the directors, the producers- just everybody.

Was it fun to go to the big celebration when the show hit 100 episodes?
Oh yes, that was really fun. I liked the big “100” cake.

Are you keeping in touch with many of your former co-stars?
Oh yes, all the time.

What are you up to now?
Just basically doing the normal thing. Getting up early, doing school. Just the regular kid thing.

Do you think you’ll ever work with any of your One Tree Hill co-stars again?
Maybe. I don’t know, we’ll have to see what comes up. Hopefully, though, that would be really awesome.

A couple weeks ago you left Tree Hill to stay with Uncle Lucas. Was it fun to see Chad Michael Murray again?
Oh yeah, it was pretty cool.

Can you say how long you’ll be gone?
Uhh…. I think… I don’t really think I could. Maybe I could- I’ll probably be gone for… 3 episodes?

So you come back really close to the end, then.
Yeah.