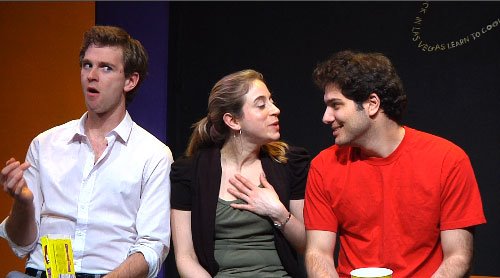 I don’t really care for original works. I fully support them but I have a hard time reviewing them. I never know whether the play needs a new cast, a new director, or a few more workshops.

Expecting by Noah Tobin is a new work at Boston Playwright’s Theatre. The play offers a unique premise on one woman’s journey to have a baby with a five-year plan that doesn’t include a man. I was excited for the hilarious struggles as this woman’s plan goes hopelessly awry and she learns a valuable lesson in the end. Unfortunately, I was treated to a night of saccharine comedy and lukewarm moments between the close-knit family of characters.

Gabrielle, played by Jennifer Reagan, is a thirty-something who wants a kid. It’s easy to see why; her life lacks much direction and she desperately wants to keep with her five-year plan. Reagan is a capable actress, but she lacks the star quality “it” factor to carry the day. She was frequently upstaged by some of the more dynamic members of her family and her would-be suitors. While she is committed to each moment and scene, her performance borders on the mediocre without much pizzazz or spunk. Thankfully, Gabrielle’s sister Dani, played with some gusto by Kate Mock Elliott, has some spring in her step and spark in her voice. Her first scene with Reagan is outstanding, especially in comparison with the rest of the show. Throughout the performance, I kept wishing for more sister-sister moments. Elliott brings out the best in Reagan, especially in Tobin’s script with clever line delivery and comedic timing, especially in silence.

Reagan struggles to develop the same chemistry with her other supporting actors. Her mother Sarah, played with under-stated brilliance by Josephine d’Angelo, is committed to each and every scene, especially towards her daughters. I really enjoyed d’Angelo’s stage activities, from digging through her purse to Purell-ing her hands. I felt like Sarah was the wrong role for her; d’Angelo’s fine acting was showcased in all the wrong ways. The script diverged in how the mother was being portrayed, and I had a difficult time following the many leaps and bounds of the character. Her best scenes were towards the beginning and I wish she was more consistent. I think Tobin’s choice not to make her consistent caused some difficulty for Reagan to follow and commit to her scenes with her mother.

Equally hard to follow was her newest beau, Marshall, played with some charm by Paul Ezzy. Marshall is a character I never thought would stick around. I expected a few cute, and hopefully hilarious, scenes and then he would disappear and we could focus back on the family. Instead, Tobin chose to develop his guy and his relationship with Reagan’s Gabrielle. Ezzy is charming, though forgettable in this role, which ironically works. His blaséness works because he is often compared to Christian, played with sophistication and flamboyancy by Patrick Massey, by both Gabrielle and the audience. Ezzy, Massey, and Reagan’s best scene is in the movie theatre. It’s dynamic, purposeful, and therefore, hilarious. Something about the collision of their distinct personalities in a tight, mostly silent atmosphere just worked for me. Massey is adorable and interesting as a figment of Reagan’s imagination. I think Tobin hit it just right with Massey’s stage-time and overall purpose. Though I felt he never clicked in the arc with d’Angelo and Elliott, an equally dynamic storyline, Massey developed his character so beautifully that I forgot about the other storylines when he was onstage.

That said, I think Tobin could use a few more workshops. He seems to have wildly divergent storylines. Additionally, Emilia Allen’s direction seems to stifle Tobin’s work in numerous and painfully long blackouts. Every time I would get comfortable in a scene, I’d almost immediately be diverted out by another blackout and scene change. Frequently the sets would fluctuate between the same two locations, creating unnecessary stage movement of blocks and bedding. While Tobin’s script creates nice “buttons” to the end of the scenes with a pointed line of dialogue or funny action, the scenes almost worked better for television than for the stage. I struggled to keep my focus, and I could tell the actors struggled to keep the energy high, despite the time in between the scenes. I don’t know whether this was the writer’s storytelling or the director’s concept but the set changes really didn’t work for me. Finally, the play had a little too much fluff and not enough heart. What started out as a unique story to tell quickly turned into the expected and predictable relationships. Massey’s character is the only one who kept me wondering and questioning and guessing. While his character was important, I think Massey’s charming stage presence carried the role far more than the writing originally intended. For better or for worse, he overshadowed Reagan.

I have to admit the show was just not my style; my friend thoroughly enjoyed the production, while admitting that he didn’t have to think much and he enjoyed it for its simplicity. I guess I expected more and I know, given some of the strong moments between characters, that the show has much more potential. While I can’t decide whether it was lackluster directing or struggling writing, the show didn’t rise to my expectations. I look forward to future drafts because of how strong Massey and Elliot’s characters were, and the strong premise in the show.