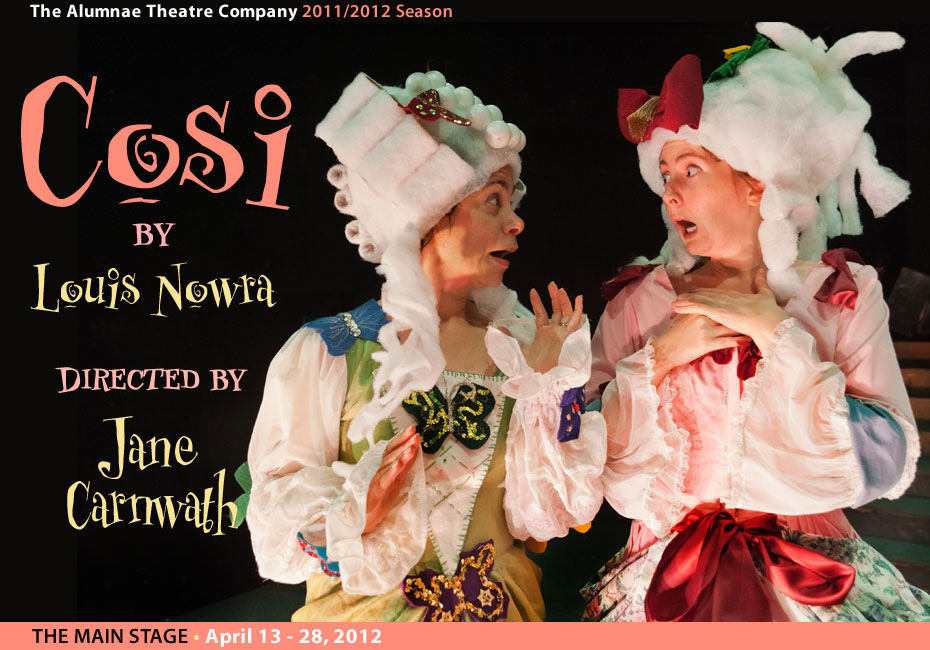 Alumnae Theatre’s current production of Cosi is the best thing I’ve seen from them since director Jane Carnwath’s last project, Hedda Gabler in 2010. There’s a character clarity in Carnwath’s productions that’s missing from most of the rocky company’s other projects. She also has a knack for casting and has lucked out on pretty good scripts. Cosi, for its part, has the strongest script I’ve seen on stage at Alumnae all season (show selection being one of the company’s weakest points). Louis Nowra uses the familiar play-within-a-play setup and the rich territory of a mental institution to craft a touching dramedy that is refreshingly distinct from the famous mental-patients-acting masterpiece Marat/Sade. The production uses Alumnae’s expansive mainspace in its frill-less form, as a blank canvas with no set construction to mimic the asylum stage. Graffiti detailing and a lazy ceiling-hole stand-in give the space some distinction but, for the most part, the actors enter onto the stage as they enter into their bare-bones rehearsal space. With such a simple setup, it’s bizarre that some of the set changes take so long (Curse you, blackout-set-change convention! Curse you!), and the play as a whole could stand to be about 20 minutes shorter, but its otherwise a resounding Win for Alumnae.

As the 21-year-old director tasked with staging Mozart’s “Cosi fan Tutte” starring a motley crew of mental patients, Jamieson Child is the grounding force amidst the insanity. His Lewis has a brainy-good guy Dan Humphrey-esque charm and exactly the right balance of optimism and defeat to sell the difficulty of his situation without making it tragic. Michael Vitorovich’s Roy is the other key player in getting “Cosi” to the (asylum) stage. He’s the enthusiastic heart of the operation, the man with the plan to stage the Mozart opera he loves so much, no matter how impossible the odds. Vitorovich occasionally slips into overly zany territory, but it’s him who keeps the pace up and the spirits high, which is key in a play with lots of downer characters. He’s also armed with a wonderfully harsh wit when it comes to criticizing Lewis (whom he calls “Jerry”) and delivers some of the greatest lines in the production.

Christopher Kelk plays Henry with the sort of matter-of-fact old grumpiness that somehow always proves funny no matter what he does, though his act-five solo as Don Alfonso (the only singing that makes it into the opera interpretation) has a triumphant pride that makes it his best moment. Patricia Hammond is a gutsy Cherry, all crass bawdiness and galumphing confidence, though she, like Tina McCulloch’s neurotic Ruth and Matt Brioux’s delinquent Doug, grows tiresome after awhile. Ryan Kotack makes an immediate bad (in a good way) impression in a few short scenes as Lewis’ Communist sympathizer/girlfriend bedder/condescending jerk “friend”. Kotack has the sort of charm/smarm that marked the best of Cary Elwes’ villains (mostly just The Jungle Book– he was so scary in The Jungle Book!). Joannae Sarazen was my least favourite in the unforgiving role of Lewis’ uppity cheating girlfriend, though James Warner manages to do something with the easily-overlooked part of asylum musician/horndog Zac. Laura Vincent is the final great actor in the play (though her British accent, like Warner’s, serves to point out the oddity of all the geographically random accents in a cast of Australian characters with Australian slang). Her take on drug addict Julie is quiet and thoughtful- a welcome foil to the broad silliness of the other patients- and her chemistry with Child’s Lewis is spot-on. I think the cast members playing characters with mental disorders could have used a bit more research, or definition of illness somehow, but they fared far better than expected, considering the vagueness of their issues.

Cosi is still a little rough, but it’s by far the best Alumnae’s done in awhile, helped along by a few standout actors, a refreshingly strong script and the company’s best director, Jane Carnwath.