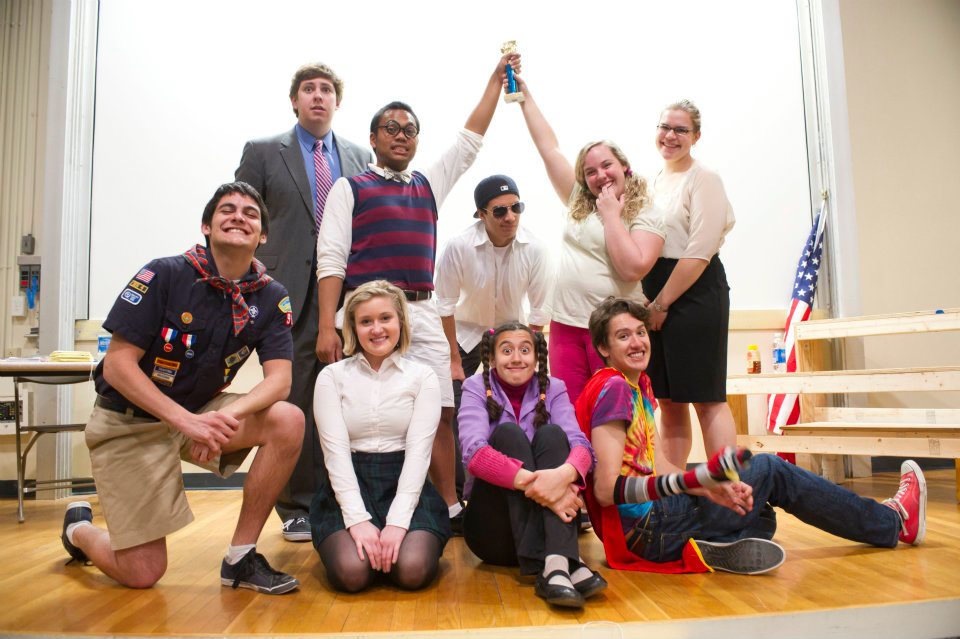 Sometimes you need a night of just fun theatre, and last weekend Boston University On Broadway presented The 25th Annual Putnam County Spelling Bee to excite and thrill its college-aged audiences. Directed by Stacey Yesenosky, On Broadway’s production was charming, in every sense of the word. Her Director’s Note quickly told me that she had approached the show with a keen purpose that was, in fact, unexpected. Spelling Bee is a silly show. It might be William Finn’s silliest, and it is unapologetically so. Yet, Yesenosky and her cast managed to extract some human goodness from the hour-and-a-half hilarity. For that, I’m thankful, and down-right impressed. Though I thought some of the cast missed their mark, the entire cast and crew approached the production with such heart and purpose that more than made up for anything else that was lacking. Despite recently seeing stronger casts, I couldn’t have asked for a better production from BU On Broadway.

To start, thank goodness for Georgia Ladd’s voice. What a powerhouse performance from a relative newcomer to BU’s theatre scene. I’m sad that I missed her past performances, but I won’t miss anything from now on. Her performance as Rona Lisa Perretti, the moderator of the bee, was nuanced, charming, and, dare I say, a little snarky. Her comic timing was brilliant, and her voice stole each and every scene. Frankly, her and Michael Butvinik’s Principal Panch were almost too strong as on-site commentators and judges. They had amazing chemistry and fed off each other perfectly. While I’m not crazy about Butvinik’s voice, his comedic skills are unmatched, having played the Beadle in last season’s Sweeney Todd and he’s outdone himself in this production. His definitions were spot-on politically incorrect and hilarious, a tough line to draw in any theatre production, college or otherwise. In my opinion, Butvinik’s perception for that line beat many of the most famous Saturday Night Live comedians, a high but not unworthy comparison. To round out the adults was Bernardo Vargas’ untouched Mitch Mahoney. Vargas had easily one of the best male voices, yet his character slinked into the background in most scenes. I don’t know if his talents were best used as the “comfort counsellor” since his best moments were as Logainne’s very subtle gay dad, but he’s a very strong performer.

The spellers themselves ranged from mediocre to superb. Emily Bosco’s Logainne Schwartzandgrubenierre walked the perfect line of straight-faced seriousness to create her comedic scenes. Her commitment to her character’s struggle with two overachieving and overbearing gay dads was endearing and even heartbreaking, and all the more hilarious. Caitlin Donahue’s Marcy Park was annoying, bossy, and intimidating upon first meeting, but she truly shone in her “I Speak Six Languages”, which I wish had came earlier; I had written Donahue off as a mere caricature, only to be surprised by her stunning performance late in the show. Jake Delaney’s Leaf Coneybear, on the other hand, never failed to surprise and excite. Though his solos didn’t feature much in terms of vocal fireworks, his role clearly showed his tremendous comedic skills. Easily the most dynamic of the spellers, Delaney had the perfect response to each moment and I was disappointed when he was eliminated from the bee, because it meant no more convulsive spelling. Lauren Haslett’s Olive Ostrovsky tread some difficult boards; clearly with a heart of gold, Haslett struggled sometimes to not border on the annoyingly cute. A little too saccharine much of the time, her best moments were her concern about her parents, creating some tremendous moments late in the show, especially in her “I Love You Song.”

I’m left with my two disappointments. Tom Schrank is a stunningly capable actor, but he took the boyish charm and energy of Chip Tolentino a little too far. He could have used a bit more restraint and more grounded realism to capture the awkwardness of a boy with too much emotion, too much energy, and too many hormones. Though Schrank has a wonderful bari-tenor voice, he fell just a little short of reaching some of Chip’s upper notes, especially in “Pandemonium,” (but the song sits so far in a guy’s stratospheric register that I can’t fault him too much). Fernando J. Limbo III was a crowd favorite with his soft-shoe “Magic Foot”, but I was less than impressed with his moody portrayal of William Barfee. His one redemption came too late in the show when he had a tender moment with Haslett’s Olive. Limbo was a little too one-noted, and a little too angsty for my tastes, especially when many of the other actors managed to create subtleties despite the script’s caricatures. Overall, the cast was a stunning, yet youthful mix of talents which blended to create a rich and warm production.

I tried to ignore the many technical hiccups, especially in sound, since I’m sure they were fixed in subsequent performances. The blend was awful at times between the singers and the orchestra, but I blame the BU’s awkwardly set-up Jacob Sleeper Auditorium. However, the space proved perfect for the technical directors, Stephanie Bont and Victoria Kelman, to transform into a gymnasium.

What made the production was Yesenosky’s unified concept, something rarely seen in college or even community and American regional theatre. After reading the Director’s Note both before and after the show, I think Yesenosky and her cast and crew fully accomplished their production concept. But even for the uninformed audience member, BU On Broadway’s 25th Annual Putnam County Spelling Bee was a delight, and a thrilling night of comedy and joy that reminded us of the childhood we left behind. G-R-E-A-T J-O-B!