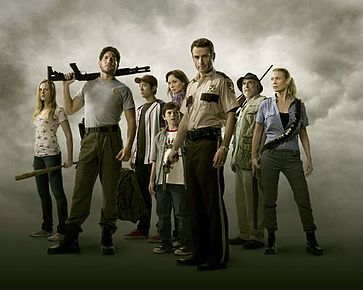 Zombies are nothing new. They’ve been a staple of the silver screen, starting in 1968 with Romero’s Night of the Living Dead, to today’s modern 28 Weeks Later and Zombieland. Zombies feature prominently in books, comics, music (think Michael Jackson’s Thriller), and especially video games. Yet somehow, it took until 2010 for the zombie hordes to break into the mainstream world of television, when AMC premiered its first episode of The Walking Dead. In the world of The Walking Dead, a few lucky, rag-tag individuals have survived a terrifying zombie apocalypse and armed themselves with everything from pistols to bows and arrows. Families, friends, and strangers alike struggle to survive in the post-apocalyptic, zombie-ridden world. The second season is comprised of thirteen episodes released over six months, all of which built toward its season finale on March 18. If you’re still on the fence about The Walking Dead, this spoiler-free review should guide you in the right direction – whether that means catching the first season on Netflix, or avoiding it altogether.

If you fear that The Walking Dead will be, like so many zombie flicks before it, an amateur hack-job – fear not. The second season features writing efforts by industry veterans Glen Mazzara (The Shield), Scott Gimple (Life, FlashForward), and graphic novelist Robert Kirkman (The Walking Dead, Invincible, Ultimate X-Men), while Frank Darabont (The Shawshank Redemption, The Green Mile) retained his role as an executive producer. What’s better, the talented actors on screen match the creative minds behind the show. AMC easily rivals HBO and Showtime for quality dramas with high production value, with original programming that also includes Mad Men and Breaking Bad.

But be warned, The Walking Dead is not for the faint of heart. Dismemberments, decapitations, disembowelments, and other D-words are commonplace, although anyone who knows anything about zombies should expect as much. If you are looking for a respite from the violence already plaguing the airwaves, you will find little solace in this post-apocalyptic zombie thriller. That is not to say, however, that every episode is a stomach-turning free-for-all of gore and carnage. In some episodes, zombies hardly feature at all, and guns are merely props for idle hands. And therein lies the genius of The Walking Dead.

The surprising element which makes The Walking Dead so successful (perhaps thanks to Robert Kirkman’s decade of zombie story-telling expertise) is that zombies are NOT the antagonists. After all, zombies lack the ability to think, plot, ambush, usurp leadership, or sleep with your wife. It is the survivors, the living humans, who provide these dramatic elements and serve as the major antagonists. When the real zombie apocalypse comes to pass, the zombies will pale in comparison to the desperate survivors looking to loot your house and steal your last can of beans.

With that in mind, some may be disappointed to find that not every episode is “a stomach-turning free-for-all of gore and carnage.” The pacing is deliberately slow, which not only builds suspense, but creates an atmosphere where an audience can care about character arcs and appreciate the relationships between these characters. Some of those relationships are romantic, others are antagonistic, and most of the major players, for better or worse, undergo some genuine transformation. Adrenaline junkies beware, The Walking Dead is character-driven and takes its time.

Unfortunately, The Walking Dead falls into the same major pitfall as almost every zombie film which preceded it. Somehow, characters still make decisions which seem foolish to an outside observer. As an audience, it’s frustrating to watch characters doing things that don’t make sense given the situation, or are downright stupid. (“Hey, it’s a zombie apocalypse! Don’t let your kid wander through the woods on his own!” one might shout. Or, “Hey, zombies are attracted to loud noises! Maybe you shouldn’t shoot indiscriminately into that zombie horde!”) Still, at least the characters in The Walking Dead suffer for their actions. After all, if everyone made the right decision in every scenario, it wouldn’t be much of a drama.

The Walking Dead is a television adaptation of the graphic novel series of the same name – and the term “adaptation” should be used loosely. Fans of the graphic novels will immediately spot the differences – the show is drastically altered from the source material. Despite these differences, both versions present the audience with a number of moral quandaries. Should a group of survivors govern themselves as a democracy, or elect a leader? Who should be that leader? Should their goal be to survive, procreate, or cure the zombie pandemic? Should human life be preserved at all costs, or should survivors protect themselves from others, even if that means murder? Alas, there are no easy answers on The Walking Dead.

The Walking Dead is a violent but sometimes slow account of several survivors struggling against the odds in a post-apocalyptic, zombie-infested world. The plot is driven primarily by characters, not action. Despite the occasional lapse in character motivation, The Walking Dead remains one of AMC’s most intriguing and consistent original dramas.