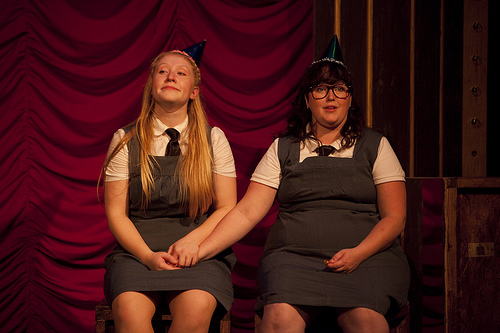 Calgary native Rielle Braid was the standout performer in Ride the Cyclone, a contemporary musical from Atomic Vaudeville which played to sold-out crowds across the country in 2011. As precocious-yet-deceased Ocean Rosenberg, Braid brought limitless energy to the Passe Muraille stage, earning herself a My Theatre Award nomination for Best Actress.

Can you remember your first experience with theatre?
I can’t remember my very first experience, it definitely happened when I was very young.  But the experience that stuck with me was when I saw my first Shakespeare production in Calgary.  It was Much Ado About Nothing, which is a fantastic play, and I just couldn’t believe how enchanted I was.  I forgot I was in a theatre.  It was the most magical, sincere experience, and all I could think of was “I want to do that.”  I poured through the program and realized that these amazing actors were real people, people who lived in Calgary, and it made it seem like a reality to me.  That I could do it too.

How old were you when you first started singing?
I was six years old when I started taking lessons.  I sang around the house all the time trying to mimic Ella Fitzgerald.  My dad always played Frank Sinatra, Ella, and Louis Armstrong after supper.  On the weekends he’d play the Beatles and Fleetwood Mac.  I loved it, and listening to those records is why I started singing; I liked what I heard and wanted to try it.  So I asked my mom if I could have singing lessons, and she took me.  After a couple of years, around the time I turned nine, I started singing in Kiwanis festivals and doing it more competitively.

What actors and actresses have always inspired you?
I go through stages of obsession with lots of people, but I’ve consistently loved Patti LuPone and Gary Oldman.  I love a nice mixture of bombastic and simplistic.  I’m a big Bette Davis person, too.  And in terms of Canadian actors in theatre, Meg Roe always blows my mind.

Where did you study/develop as an actress?
I studied acting at the University of Victoria.  I was in the acting specialty at the Phoenix Theatre.

Do you have any dream roles you think are perfectly suited to you or something completely against type you’d love to try as a big challenge one day?
I have way too many dream roles to count, but a dream role I think is pretty perfect for me is probably the Baker’s Wife in Into the Woods.  Who knows if a director would feel that way, but I hope one day someone does!  I also would love to play Ophelia, and Carol in Oleanna.  Mrs. Lovett from Sweeney Todd (when I’m a little older.) There are so MANY parts I want to play; I could go on and on.

Against type would undeniably be Caroline Thibodeaux in Caroline, Or Change.  Clearly, I’ll never, ever, play that part.  But it’s my favourite musical in the world.

Which directors and actors have had a major influence on you throughout your career?
Brian Richmond, a great director, is one of the professors at the university of Victoria. He directed me in two of our school shows (Wind In the Willows and Dark Of the Moon) and he truly taught me how to rise to pressure.  These were big shows in terms of cues, costume changes, and cast size, and there was a lot that went into a scene.  I’m very grateful I got a chance to be a part of something so high concept.

What’s your favourite role you’ve ever played or production you’ve ever been in?
Ocean Rosenberg wins this one, followed closely by Mole in Wind in the Willows.

How did you get involved with Ride the Cyclone?
I was performing in Wind in the Willows at school, and Jacob came to see the show.  After seeing it, he asked to meet with me and we had coffee and talked about Cyclone, and Ocean.  I told him I was really interested; so then he asked me to be involved with an Atomic Vaudeville cabaret (their bi-monthly, brilliant sketch comedy show) to see what I was like to work with.  Then we went from there!

Describe the rehearsal process for the show.
Before rehearsal started, we workshopped the show several times. Going through music and text and choreography.  Then, once rehearsal started for our first production, we rehearsed in Britt’s apartment.  There were a lot of changes happening on the fly, with Jacob giving us new lines during rehearsal, Britt changing up blocking to make it more specific, and Brooke and Treena (music director/choreographer) always coming in with something new.  A lot of things morphed to suit the actors.

Tell me about Ocean. How did you approach the role? Did you do anything specific to prepare?
Ocean is still a long, long process for me.  How I’ve played her has changed a lot, because I was in my final semester of school when we performed the show for the first time.  I was trained, but still green in a lot of ways.  I used to approach Ocean as the ‘funny character’ (which is never a way to approach something), the ‘mean girl’, but Jacob and Britt have always made sure to help me find the truth in her. To listen to what the other characters say about her.  She’s a real person, and she has good intentions.

I tend to get a little silly when I have an audience, so for me, to prepare, I try to calm down and feel as real as possible.

On a technical level, I sleep a lot.  Every actor is different, but I’ve always felt a need for a strict schedule.  I like to go home and get a good long grandma sleep, eat the same breakfast, go to the gym, do some yoga, and walk to the theatre.  I like to feel nice and loose and strong for a show.  On two-show days, sometimes the cast has dinner all together.  Or some of the cast nap, and then Kholby Wardell and I go to Subway and talk about everything while he knits.

Do you have a favourite moment in the production?
I deeply love this show, and my favourite moments are constantly evolving. I lose my mind during Kelly’s monologue, it’s so gorgeous.

What were some of the biggest challenges working on this production?
For me, I’ve always been a bit obsessive about keeping my voice healthy.  I’ve been singing for a long time, and I always want every performance to sound perfect.  That comes from the fact that since I was six, I would rehearse for 1-3 performances a month MAX, I didn’t have to sing every night, so I could afford to be a perfectionist.  However, we’ve been touring cyclone for a long time, and there would be some two show days where I was so exhausted that I was way too hard on myself if a note didn’t sound 100%.  I’ve learned so much about how to sustain a show, how to rest, and most importantly, not to stress if it’s not perfect.  Shake it off.

If you could pick one definitive moment in your career up to this point, what would it be?
I sound like a broken record here, but I’d have to say being a part of Ride the Cyclone.

What are you doing now/ what’s your next project?
Right now, my big project is settling into to Toronto with my wonderful boyfriend Jamie, adjusting to the new life!  I’ve moved into a house with him, Kholby (from Cyclone) and my friend Jeffrey.  I have a couple of things set up, and I’m also going to be doing a lot of writing.  A couple of years ago I wrote a Fringe show that went over nicely, and I’ve been meaning to sit down and write something else.

Do you have anything you’d like to add?
I’m going to do this solely because EVERYONE I know, every friend, every person who loves me, will roll their eyes when I do this, and tell me off.  And that’s hilarious to me.  So, without further adieu: I love Wrestling.  Go CM Punk!