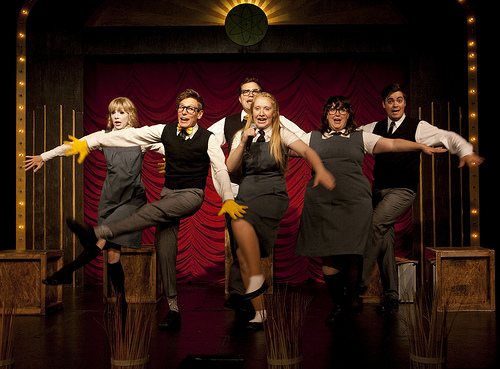 Getting Dizzy on the Cyclone

I’m loving the fact that Atomic Vaudeville/Acting Up Stage’s Ride the Cyclone has all the buzz in the world heading into the last 2 weeks of their sold-out run at Theatre Passe Muraille, not because I adored the show (it’s good, but nothing to write home about), because it’s weird. Really weird. And when it comes to weird, it’s not easy to get much mainstream love. The fact that Ride the Cyclone, an off-beat, largely structure-less, potentially alienating exploration of youthful oddity is a bonafied hit gives me hope that Toronto’s everyman eyes might finally be opening to the theatrical world that lives beyond The Lion King and Mirvish’s gilded playbills. The talent and creativity behind the wackadoo show is plenty to get excited about, so I’m thrilled to find that people are indeed excited.

Jacob Richmond’s story about a dead teenage show choir and the oh-so-metaphorically loaded roller coaster that killed them kicks off with the play’s wittiest character- a automated carnival fortune teller named Karnak who narrates the action from stage right and “tends to anthropomorphize his friends” (in a wonderfully dry twist, the rat who’s about to kill Karnak by chewing through his powercord plays electric bass for the purpose of the story’s musical interludes). The kids Karnak introduces prove charming enough, but I couldn’t help wish he didn’t hand over the microphone so easily, so to speak.

Said kids are led by an exuberant Rielle Braid as the over-achieving and sunshiny Ocean Rosenberg. With a powerhouse voice and enough energy to power Karnak, powercord or no, Braid is easily the standout of the cast, even in the role most designed to annoy (I particularly enjoyed her smiley cruelty towards her “very best friend” Constance). Matthew Coulson offers up a fair share of laughs as Misha Bachinsky, a hilariously angry Ukrainian orphan who’s taken up gangsta rap alongside his glee club commitments. Kelly Hudson is all sorts of adorably awkward as townie Constance Blackwood, lending the trod-upon girl a delightful shot of kindness and optimism.

The always-endearing Elliott Loran lets his inner freak out as the socially hindered Ricky Potts, a boy with an imagination that turns him into a “swingin’, space age, bachelor man” tasked with saving the planet Zolar. Obviously. It’s a ballsy performance that threatens to steal the show on multiple occasions, even as Loran stands inocuously to the side or plays the piano to accompany the others. Kholby Wardell is also a highlight as Noel Gruber, the boy who taught Ocean that not all gay people are fun to be around (ha!). His divarific drag piece I think sells the superb singer short a bit but his many wonderfully deadpan moments easily prove his comic chops. Sarah Pelzer rounds out the crowd with her beautiful and strong soprano and creepily inhuman movement as the decapitated Jane Doe putting a damper on the club’s farewell concert.

My biggest gripe with Ride the Cyclone comes down to the songs (music and lyrics by Brooke Maxwell and Jacob Richmond). They’re well-constructed and showcase the voices well but just aren’t quite catchy enough. The performances are rousing, the characters engrossing, the story and tone delightfully refreshing, there should be songs that grab you and have you humming all the way out to the car and beyond. These just don’t do that. The production numbers are too long, with sometimes indecipherable lyrics, and follow a fairly strict story-solo formula that left me wanting more (not in a good way). What really got me was the overwhelming feeling that Maxwell and Richmond could do better, and the actors certainly deserve better. Cyclone‘s is one of the most wholly talented ensembles I’ve encountered in some time, but I just don’t feel like the ride takes them quite as high as it should.