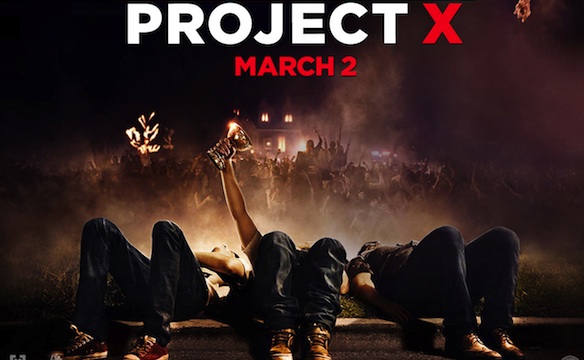 High School, Or Something Unlike It

Throw out everything you know about Found Footage films.  Throw it out.  From a realm that used to rely on realism and a medium that thrived on narratives as close to reality as possible comes the story of three high school geeks planning the party to be remembered for all time.  Spoiler alert, they succeed.

While the rampant destruction has been debated by critics I found myself laughing at the irresponsible mess of a night gone completely wrong (but oh-so-right in many an instance).

The trailers for this film do not do it justice- it’s the dirtiest snowball that only rolls downhill from there.

And still, there was a giant part of me that loved it; a part that was living vicariously through the debaucheries, lecheries, and hedonism.  It’s a fun film.  Do not going in expecting to learn any lessons.  We start with a basic premise: Boys who wants girls.  The best way to do that is to throw a party – these are simple film tropes that then seem to explode into various set pieces involving midgets, arsonists, and the inevitable boys trying to get girls.

This is not Animal House, it’s not a classic, but it is a rather brilliant exploitation of a genre we so often rely on to feel a certain reality.  We’ve seen this digital camera work before, usually in horror films or independent features, but never like this.  One of the film’s biggest pluses is that with its documentary style we are ALWAYS amazed at what happens next.  As an audience we are tricked by every angle.  When CGI is utilized it is hardly recognizable because we have become so accustomed to the viewpoint that it is all “real.”

Project X is the first party movie I’ve seen since Superbad that truly goes out of its way to earn its R rating.  The language and sex is in your face and I can honestly say there are some laugh-out-loud lines but also some whose brows are so low few earthworms would find them amusing.  If you go with a group, people will be offended – it’s not a fact, it’s simply odds.

In the end Project X delivers exactly what an R-rated High School party movie promises and then some.  It’s hard to write a review without giving away the best gags, but consider yourself in for an experience worth the price of entry.  It’s voyeurism at its best.