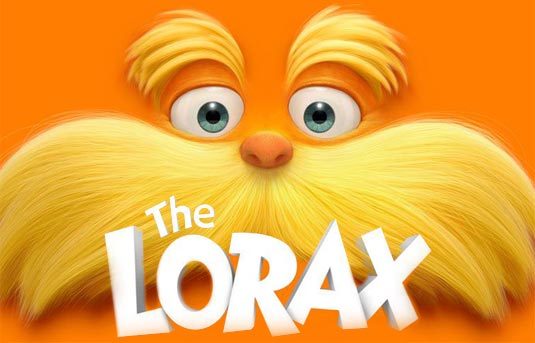 he Lorax is one of my favorite Dr. Seuss stories.  It’s a morality tale, a sort of new-age parable about appreciating what you have and taking care of what you’ve got.  It is not as anti-industry as it is pro-practicality.  It’s modern economical ethics for kids with rhymes.  The 2012 film adaptation takes this core message and expands the forty-five page short story to an eighty-six minute film using flashbacks and song and dance numbers to elaborate on environmental issues and corporate greed.  With the attacks on The Muppets by Fox News this reviewer waits with bated breath to see the Right Wing reaction to this very much hippie cartoon.

The film is vibrant and cheeky with likeable characters and a miniature villain who will keep kids interested and gives us someone to root against.  The songs are fun and the animation is, at times, stunning.  The gags with the singing fish will remind older viewers of the blind mice in Babe and the addition of Betty White playing the always entertaining grandmother should be a recipe for an instant classic but all this adds up to an engaging beginning and end in a movie that completely lacks a middle.

The major qualm of the film is that there are never any stakes involving the trees, the seed, or the villain.  He is not actually that evil.  The film would have done better if it took a page out of Cloudy With A Chance Of Meatballs and had a bad guy directly involved with the town’s problems.  While the acting is fine, we do not actually get much character development.  This may be a kid’s film, but it’s still not okay that most players feel one dimension and driven by the most superficial of desires.  The boy wants the girl, the girl wants a tree because they look beautiful, and the grandmother wants everyone to be happy.  The villain wants money, his henchmen want respect, and the people of the town can be manipulated by whoever sings the better song.

Still, in the last fifteen minutes, The Lorax shows its heart, which is as big as that of Dr. Seuss’s other famed character, The Grinch, upon hearing Christmas tunes.  My audience, filled to the brim with children and parents, laughed at the appropriate times and even applauded at the tree-planting message at the end.  The characters are cute, the voices are distinct, and this truly is a nice short ride; fun for the whole family but not as good as recent children’s fare.

Upon leaving, my lovely date made an astute observation that I whole-heartedly agree with: The film has little to no actual text from the book.  It suffers for it.  With a world that relies heavily on the whimsical and fantastical, it feels distinctly like Seuss in look but not audibly like Seuss at all.  This disconnect will leave the older parts of the audience yearning for authenticity.

Author’s Note: For some reason, the character of the Lorax, voiced by Danny DeVito, has several instances wherein he appears in the context of a Christ figure:  he descends and ascends from heaven, he rounds his followers, and speaks in parables.  The allusion is a little disturbing and off-putting, to tell the truth.