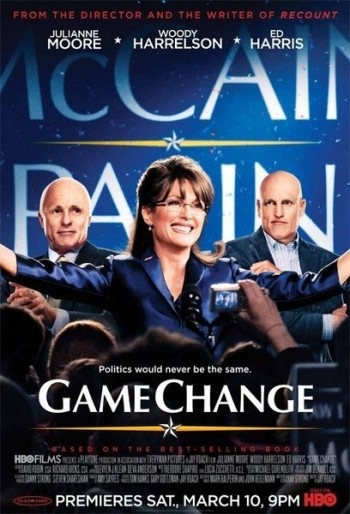 HBO’s Game Change could have easily been a liberal-biased exercise in condescension. The fact that it’s not is a credit to screenwriter Danny Strong (yup, That Danny Strong) more than anyone else. In interviews star Julianne Moore has made a point of praising Strong’s research, insisting that she refused to play any scene that wasn’t completely sourced. Because of that sourcing, the story told in Game Change is at once more fair and more troubling. We see Moore’s uncanny Sarah Palin at her most relatable and at her most unimpressive, often at the same time. Game Change shows the good in people, all of them, as well as the terrible lows to which people sink (Palin at her most accusatory, McCain as he loses the integrity he’s worked so hard to uphold for decades, the public who tear Sarah and her family to pieces as we really did back in 2008).

For me, the most revealing thing in the film is the scene in which Palin signs on to the campaign, saying “if you really think I can help, then absolutely I’ll do this with ya”. She doesn’t say “about damn time someone asked me, I’m a star!”, nor does she say “I’m not sure I’m qualified”, what she says, in a nutshell is that it’s her duty to serve at the pleasure of the man she hopes will be president some day. She trusts the advisors who’ve saught her out and wants, in the beginning, more than anything, just to contribute in whatever way she’s asked to. She honestly believes that God wants her to do this, because she was asked to. (I’d like to point out that no one mocks such statements when they come from football players or musicians- that’s standard American Christian rhetoric, not the extremism it’s made out to be). That good intention is the cornerstone of Moore’s empathetic performance. There are shocking gaps in her knowledge and her volatile emotional state sends her into defeatist spirals as well as arrogant power trips, but they’re the relatable low points of a very real person, instead of the cartoon character the general public seems determined to believe she is. Just as watching that once-hilarious Letterman interview through Joaquin Phoenix’s eyes was, seeing Palin take in Tina Fey’s lauded SNL impersonation in Seth Meyers’ insightful, smart-aleck sketches at her expense is just plain hard. Palin wasn’t qualified to be Vice President, but there’s a point at which criticism becomes heartless ridicule, and in 2008 we as a public most certainly passed it.

The characters who should have known better play an equally intriguing part, throwing an eager Palin into the deep end without making sure she could swim. Ed Harris plays John McCain with impressive accuracy in manner, despite being a good 10 years too young for the role. Game Change presents McCain as utterly principaled and generally ignorant of Palin’s shortcomings. He mostly stays out of the fray, keeping to himself and giving in easily to  the suggestions of his campaign staff, even when it means backtracking on his major Obama criticism to put flashy but inexperienced Palin on his ticket or going negative when he swore he’d never run a smear ad. McCain is a good guy, he just has no flash running against a man both flashy and good. McCain flinches at the hatred thrown Obama’s way and even goes so far as to defend him at a rally days before the election. There’s a real backbone to Harris’ McCain, a clear-sighted sense of non-partisan right and wrong; he looses sight of that when he picks Palin for her good looks and conservative desireability, unfortunately reversing his own narrative. In his final, reverberating words to Palin after their November loss, McCain warns her to avoid the sort of self-serving hard-headed conservatism that has marked the current Republican Presidential Primary, a reminder that 2008 was, at least at its sadly overshadowed core, a campaign of good guys.

The performance of the film, however, is neither of the central immitations, it’s the always-extroardinary Woody Harrelson as campaign manager Steve Schmidt. In perhaps his best performance to date, Harrelson plays Schmidt with the sort of savvy intelligence that almost always proves dangerous. He too has a righteous end goal in mind, but Schmidt is just a little more willing to compromise in order to get there than he should be. He’s a political mind who rightfully pinpoints the main reason Obama was always going to clobber McCain at the polls- star power. Here’s the issue- he’s right; they were going to lose had they not brought in a game changing VP choice. And here’s the rub- that very decision robbed McCain of his one real argument against the “greek god” standing at the opposite podium and wiped out any dark horse chance he might have had. Schmidt’s observation proved a self-fulfilling prophesy, and while the choice was irresponsible, Harrelson plays all the empathetic conflict and guilt of having that on his shoulders (his film-framing intereview with Anderson Cooper sums all that regret up with a telling “…”).

Sarah Paulson plays Nicolle Wallace, the senior aide most taxed with remedying the Palin situation. An astounding climactic scene in which Palin berates Wallace after her blown Couric interview is a highlight of the film, showing both the embarrassment and defensive instincts of Palin and the powerlessness of her advisors against her emotional shut-downs. The revelation that Wallace couldn’t bring herself to vote gives voice to the sad way in which McCain’s choosing Palin robbed him of the votes even of the people who believed in him most.

I’ve seen Game Change 2 and a half times since its March 10th premiere. Watching alongside different people, their reactions run the gamut of all the ways Palin stirred up the worst in all of us- the condescending liberals who blindly attack her intelligence and beliefs (the fact that she believes evolution exists ALONGSIDE intelligent design comes as a shock to most of this demographic, people of less intense faith who can’t believe her approach is the same as theirs); the defensive conservatives who defend her lack of understanding (a WWII history lesson takes place in the campaign office that is simply indefensible); the apathetic moderates who laughed casually along with Tina Fey and turned the VP debate into a drinking game (my university friends and I did this very thing). Whether we were blindly defending the unqualified or viciously mocking her for daring to exist, the one thing made excrutiatingly clear in Game Change is that we were all in the wrong. The only real comfort of the film? Palin or no Palin, the best man won fair and square.

Rick Davis: Listen, I too wish that the American people would choose the future Abraham Lincoln or Thomas Jefferson, but unfortunately, that’s not the way it works anymore. Now it takes movie-star charisma to get elected President, and Obama and Palin, that’s what they are – they’re stars.