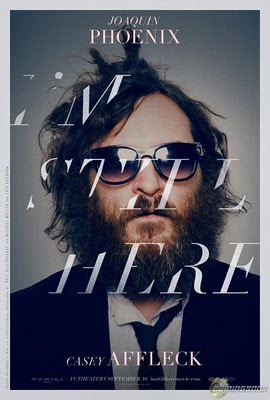 It’s been month since I saw I’m Still Here, Casey Affleck’s disturbing and unpleasant documentary about Joaquin Phoenix’s meltdown and coinciding quest to become a rapper. Despite the gross lateness of this review, I actually saw the film the week it came out, before I’d had a chance to read any articles informing me that the whole thing had been a piece of performance art. Thing is, I went into the tiny screening room at Boston’s Coolidge Corner theatre 100% sure it was performance art. Phoenix had never seemed comfortable in Hollywood but he also didn’t seem unhinged to the point where I bought his behaviour. But then I saw the film. It was horrifying. It was the most unpleasant thing I’ve seen at the movies in years. And I’m quite certain that it was actually brilliant.

Needless to say, in less than 2 hours, Phoenix managed to make me completely reverse my opinion on his behaviour. Without the lens of the tabloids in front of it, I started to believe in his breakdown.

I came out of that theatre infuriated. I was mad at Phoenix for allowing himself to fall off a cliff, essentially robbing the world of one of his generation’s greatest acting talents (his performance in Gladiator is, to this day, one of my all-time favourites). I was mad at Casey Affleck for exploiting his descent. But mostly, I was mad at Phoenix’s friends for not bothering to catch him. Or “friends” rather. It was their job to at least try and help him; if your friend is headed for disaster, blindly agreeing with them does no one any good- you have to call them on their crap, straighten them out, essentially, don’t let Lear banish Cordelia without taking a moment to play Kent. Interestingly, Sean “Puffy” Combs is somewhat of a rare good influence in the film, supporting Phoenix while trying a little bit to break his delusion. There’s also one friend, Anton, who stands up to the raging Phoenix, but by the time he does, the man is so far down the rabbit hole that he’s doing little more than saving himself by rebelling. In the film, Phoenix is surrounded by people, all the time, and doesn’t have a soul to lean on.

As viewers, we aren’t guilt-free either. As I sat there in the theatre, I remembered giggling gleefully at the awkwardness of Phoenix’s infamous Letterman interview. I remembered thinking the talk show host was so clever as he poked fun at his despondent guest, making the “best” of the botched interview. But I’m Still Here offers the audience the 2 minutes after Letterman wraps. Phoenix stumbles backstage, terrified. He doesn’t cry, he doesn’t scream (the desperate tantrum comes later), he just stares and quietly swears, defeated. That moment made me cry, for the trampled Phoenix, for his promising career, for my ridiculous self, plagued with guilt over having once laughed alongside the bully beating a beaten Phoenix further down. That incredibly human scene of a trapped man desperate to pull himself out of a hole and not sure how, that’s what had me convinced it was all true. I didn’t think he could fake that.

But he could. Of course he could. If I’d really thought about it, and maybe stopped to remember Gladiator during one of those many hard-to-watch sequences involving cocaine and hookers, I’d have known Phoenix could fake that. He’s really good. REALLY good. I think that’s what we all managed to forget in the past 2 years, when this supposed “meltdown” was playing out in the tabloids (and I abandoned as soon as the film’s disturbing images began to take priority). It’s amazing how quickly the world can abandon a truly phenomenal talent when we deem them “weird”. It wasn’t just his terrible friends who refused to help Phoenix, it was everyone- the media, the audience, the industry (except, it seems, Puff Daddy), who’d rather laugh at him than try and get him back.

In essence, Phoenix presented as a man uncomfortable in his own skin, horrified by the box Hollywood had put him in and unsure how to deal with the world pressing in on him. Hoisted on the shoulders of the tragically long list of brilliant artists who’ve had an honest-to-god fatal fall because of these same issues, I’m Still Here brings up all sorts of depressing thoughts of Heath Ledger, Michael Jackson, Kurt Cobain, and even Phoenix’s own brother River. It truly was the performance of a lifetime, but apart from that, I’m Still Here is a searing mirror held up to our glib, unforgiving faces. It takes our absurd relationship to celebrity, flips it on its head and threatens us with the consequences of the way we are. Phoenix and Affleck’s “documentary” is convincing, horrifying, and the fact that it isn’t true makes it no less right.