Obsessions with a Theme!

2) for the fact that I won’t be posting regularly again until next week. I’m on vacation see, not at my normal location or on my regular TV schedule.

That will not stop me, however, from posting a new batch of weekly obsessions.

1)they aren’t posted online, 2) I don’t have TiVo in Boston and 3) I have better things to do on Saturday nights than actually watch the show. These 3 months of episodes that I’ve caught up on in the past 3 days are the inspiration for this week’s obsessions. So, without further ado, I present to you my Saturday Night Live-themed obsession list:

Seth Meyers. First of all, he’s the head writer and is thus responsible for every bit of funny that the show produces. I like writers. He’s also an incredibly charming “Weekend Update” anchor. He’s fun and laid back without laughing too much at his own jokes (*cough*jimmyfallon*cough*). And when Amy Poehler left to have her baby, Seth handled “Update” by himself while also taking a moment to give Amy a shout out and say how much they missed her. Oh, and he’s got that adorable smile too.

Bill Hader. Easily one of the best character actors on the show, Bill Hader is consistently funny, always dead on with impressions and never over the top. You know who’s funny? Vinnie Vedecci’s funny. And what about that Dick VanDyke impression, or his There Will Be Blood milkshake sketch, Albus Dumbledore, Tim Gunn,… the list goes on and on.

I love Paul Rudd. And even though he did a very respectable job hosting SNL, all I remember from that episode is Justing Timberlake. Not only did his part in Beyonce’s “single ladies” parody make me laugh more than any other sketch, his stint on “Weekend Update” had me in serious stitches. He does a better Nicholas Fehn than Fred Armisen, a better Target Lady than Kristen Wiig and he does it all at top speed. Funny, funny man that JT. I’m not his biggest music fan but I’d watch him do comedy any day.

Sarah Palin. I can’t even remember who hosted the night that she was on. I remember Tina Fey, Lorne Michaels, Alec Baldwin and Marc Whalberg were all there (because she was onscreen with them) but that’s it. I don’t remember anything else about that night because she was so fantastically funny. First the writers, Lorne Michaels, Tina Fey and Alec Baldwin made a great show of having her backstage watching Tina do an impression of her then having Alec mix them up. Then Amy Poehler hit it out of the park with a “Weekend Update” rap with Seth Meyers and Palin boogieing in the background. Palin was so charming, easy going and willing to poke fun at herself on the show that I almost forgot that she was still, well… Sarah Palin. 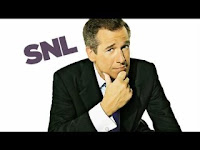 Comedy comes from the most random places. This list includes only 2 comedians (Meyers and Hader); the others are singers, “politicians” and news anchors. It was odd and it was unexpected, but Brian Williams (NBC Nightly News anchor) was the funniest host I’ve seen in a long time (Tina Fey, of course, excepted). His self deprecating opening monologue and “typical day at the office” sketch were hilarious and his impression of a shy fireman on “Bronx Beat” was terrific. Who knew?