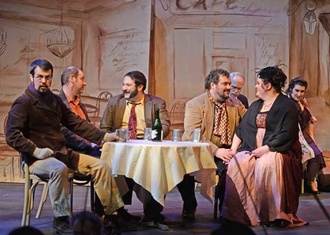 A Night at the Opera: La Boheme

Here’s the fun thing—I go to a lot of theater, but I’ve never been to the Opera. Not once. Which, if I was any other average 20-something, would not be weird at all. But I’m me, so it was sort of weird. So I was lucky enough to get to see the Boston Opera Collaborative’s production of La Boheme (directed by David Gram) the other day, and let me just say this: it was great. It was a very short show, a little over two hours, which was perfect for my introduction to opera. As the friend I saw it with said “you’re lucky you’re not at a Wagner.”

I had a lot of fun. Now, I don’t know the language that people seem to know to talk about Opera, so most of my observations will probably be superficial, but hey, it is what it is. Puccini’s score is beautiful, conducted by the fantastic musical director Adam Boyles and performed by singers that are more than amazing. I don’t know much about music as a study, but my favorite by far was Brandon Milardo’s Marcello, a powerful and clear vocal performance. Rebecca Teeters’s Mimi is also a treat, supported by a strong Rodolfo in Jeffery Hartman.

As to the design of their show, in the words of the director, they keep to the essence of the period while accepting that it would be difficult to make it truly period accurate. To do this, they use largely period-esque costuming, with the overall feel of each costume being period while the individual pieces are pulled from modern dress. The actual design of the stage is composed of a number of paintings, creating a backdrop that can be changed quickly because it isn’t really a backdrop. This also makes the artistic nature of the characters omnipresent, as they’re surrounded by art at all times. These paintings become set pieces in their own right, with the paintings of fireplaces being lit from behind and treated as actual fireplaces. Doing this, the world becomes real and pulls the audience into feeling for the characters, who are already commanding our feelings through superb acting and heartfelt song.

So, despite the fact that I know next to nothing about Opera, I had a fantastic time, and I would heartily recommend the show to anyone lucky enough to have a chance to see it. I know I’m looking forward to seeing more opera, and I’ll be doing my best to see more from Boston Opera Collaborative.