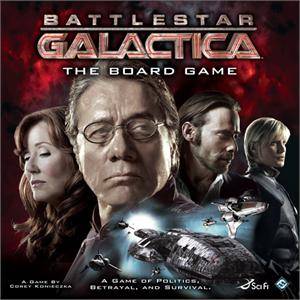 One of the joys of going back and watching old episodes of Deep Space Nine is seeing Ronald Moore’s name in the opening credits and thinking, “Hey!  I liked Battestar Galactica for a time!”  This same thought is present as one plays the board game which has been stunningly crafted to create the same level of tension as the show, especially the first season.  Players start off with a pretty straightforward mission: Survive long enough to find a new home for the nomadic human race.  This goal is complicated by a few things.  First off, the game starts with them squaring off against their implacable foes, the Cylons who mean them no good.  As they’re fending off wave after wave of assaults on their ships, turn by turn they have to deal with various political, military, and logistical crises that pop up and demand their attention, not to mention the risk of attracting even more Cylon ships.  All this while there are one or more traitors in their midst.

Right at the top of the game, after the players decide if they want to be smoldering Edward James Olmos, greasy but lovable James Callis, or pre-Botoxed Mary Mcdonnell, they are then dealt a card from the Loyalty Deck which determines if they’re a Cylon or a human.  At this stage, depending on the number of players, there are anywhere from zero to three Cylons who only win if the humans don’t.  That’s right, players don’t even know for sure if there is a traitor in their midst.  If this wasn’t bad enough, halfway on their way to salvation, the Loyalty deck comes back into play in a Sleeper Phase and players dip again into the well of treachery.  What this means is that if there wasn’t a Cylon before, there definitely is now.  Also, at this stage, there’s a chance that a human or Cylon can be a sympathizer which means that they switch teams but no-one knows which team for sure.  Beautiful paranoia!

In the game I just enjoyed, we all spent the first half of the game as humans, unsure if we could trust each other and trying to take care of the mindless bad guys which the game manages to procedurally run through some fairly well thought out mechanisms.  We took some damage, lost some ships, and generally blundered our way from jump to jump.  There was a moment of pure,genuine relief when we made that first jump and the fleet of Cylons about to pound us into dust just got swept off the board and we were able to catch our breath and put out our fires.  That relief lasted until we came to the Sleeper Phase.  At this point, I (a lovely President Roslyn) drew the You Are a Cylon card and my neighbour to the right (Admiral Adama) revealed himself to be the Sympathizer.  This made things very interesting as all four players went from having a vague sense of unease to only two maintaining that sentiment, one knowing he was a bad guy but unsure where his colleague in crime was, and I sitting pretty, knowing exactly who to trust and who not to.  Not a good place for the humans to be.  After a little light sabotage, our Chief Engineer being sent to jail by the doppelganger president, and another Cylon fleet springing into action, the hammer finally dropped and the human fleet ran out of food and starved to death on any icy moon while Cylon Roslin and her Admiral paramour laughed wickedly into the night.

All in all, it’s a lot of fun but the capacity for hurt feelings and bad blood is high, not Munchkin or Diplomacy levels but still, a good sense of humour and some decent self-esteem are an absolute must.  There is a certain, uneven feeling to the game and I wonder if it’s even possible for the humans to win but I still recommend it for folks who loved the show or are just interested in a very different way of playing and want to inject a little unease and nail biting suspense into your game.  Be sure to keep the rule book handy though, this is Fantasy Flight and while it isn’t Avalon Hill, they still like their rules nice and crunchy.

As a side note, you get bonus points if, like my friend, you play Baltar with an invisible Six whispering in your ear all game.  So say we all.