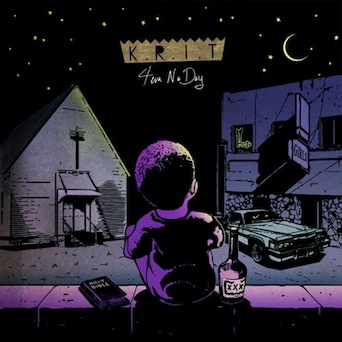 Earlier on in the year, I talked about how K.R.I.T. was going to be releasing his debut LP, Live From The Underground. Remember that? Well, in the meantime – to put off the drooling dogs we have become – K.R.I.T. decided to release one more mixtape for us before that dropped. 4Eva N A Day features some immediate classics from the underground king right now. Mr. Scott brings us into a day in his life as we start with the sounds of him waking up and go through his routine, commenting on everything from nostalgia concerning lost loved ones to record label issues and riding in his candy coated classic.

Now, through 15 tracks he flies solo. Happily, it’s never off the handle and K.R.I.T. shows he doesn’t need any backing because he has plenty to say in force and depth. With an ability to go between tame, saxophone ridden tracks such as “Wake Up” to the layered, southern slammers like “Country Rap Tunes,” K.R.I.T. doesn’t let up on showing his will to want more and go after success – regardless of the cost. And throughout of all that desire and drive, he walks this fine line of never overreaching or spitting that he’s the best or talking up his future endeavors.

Incredible production and rapped with a ferocity rivaled by few right now, K.R.I.T.’s 4Eva N A Day is a fantastic stepping stone that’s firmly cemented in a blazing path to hip hop longevity.