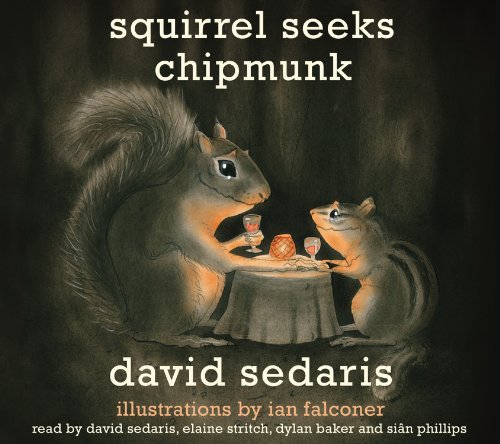 This is a weird little book. I picked Squirrel Seeks Chipmunk up on a whim, as I do with most books (I like a little chance involved in my life). Every once in a blue moon, I approach bookstores and libraries with a list, knowing exactly what I’m looking for, but, like, 98% of the time, I’m just browsing covers and titles until something seems interesting and then opening to a random spot in the middle to start reading from there. I don’t open to the end, because that’s crazytalk, but if I open to the middle, I’ll get a sense of the style, and without context, it’s hard to spoil yourself from the middle. Anyway, I open to a random spot and try to read. If I can’t get into it/don’t like the writing in the random spot I’ve chosen, I usually just put book back on the shelf.

I’ve never read Sedaris before, so I can’t really tell you how this book feels in relation to his others. I have a bunch of friends who are very fond of DS, but I’m just not too familiar. This one, Squirrel Seeks Chipmunk, is a collection of short stories, mostly satirizing human behavior, but with various animals standing in for the people. It’s a bestiary. These stories are mostly funny, dry, sharp, and pretty thoroughly populated with utterly silly and/or pathetic animals(who will pretty much all seem like people you’ve probably met, but hopefully don’t know very well, and almost certainly don’t like). All the stories are short, just little snippets, so you don’t have long to dwell on how repulsive some of the characters are, and reading about them can be funny and enjoyable, as opposed to alienating and horrible. Each story is also accompanied by one or two illustrations by Ian Falconer—the illustrations are primarily black and white (with a hint of red), they’re a combination of drawing and collage, and they’re funny, captivating, and delightful in their own right.

My favorite stories in the book are The Squirrel and The Chipmunk, The Parrot and the Potbellied Pig, and Hello Kitty. And while I like those stories, the book as a whole was just not really my jam. As a form, I love short stories. They were big for me in my more formative years—Bradbury, Louis L’amour, Steinbeck—I got into them because of their short stories. But for whatever reason, even the stories I like in Squirrel Seeks Chipmunk just don’t grab me enough—they were my favorites of the book, but compared to short stories I really love, they were just … fine—and I wasn’t crazy about the rest of the book. I think it’s probably that most of the stories were really I dunno, disdainful? of humanity/Society. And yeah, a lot of societal conventions are dumb, and people can be really silly, but I tend to be hopeful about people—there’s good stuff in there. And for me, it felt like almost every single story was just … ultimately misanthropic. And I can empathize with a certain amount of misanthropy (I mean, I’m sitting alone in my hermitage writing this, so take that how you will), but this was just relentless. So in the end, while I liked some of the stories, the book was a weird, off-kilter ride more than an enjoyable one.

It wasn’t my thing, but it wasn’t bad. But I don’t think I’m going to read this again. And for me, re-reading is the surest sign of love for a book. If pages aren’t threatening to fall out, if the covers aren’t a little mashed up, if the spine doesn’t have creases, I don’t believe that the book’s been loved. But that’s just me. The books I love are always at least halfway to becoming tissue paper. Anyway, I’m getting off of the ambivalence train now: David Sedaris’s Squirrel Seeks Chipmunk was fine, it was a fun read, but it was not for me.