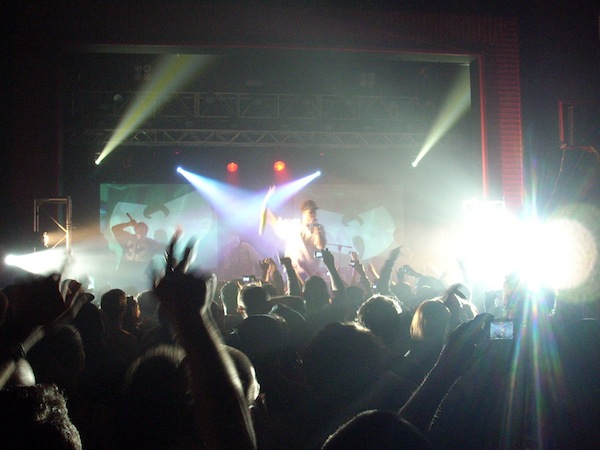 The Importance of Live Shows

Nowadays, it’s really easy to get lost on the Internet. Days can go by before you realize you haven’t left that blue glow and you’re still wrapped in the towel you showered in from Tuesday morning. It happens to the best of us; I know from personal experience. And don’t get me wrong – the Internet is a wonderful place. Every possible idea is easily accessible with a fast enough connection. We can visit the past, dream about futures, and try to keep up with the present alongside billions of people all from the comfort of our lap.

I do believe however, that there is something wrong with this accessibility. It’s paved the way for people to just ignore the world around them as much as it has helped bring it closer to them. There’s a catch twenty-two nowadays because the world runs via download but experience is found on a keyboard. I feel that live shows are slowly becoming a thing of the past and that breaks my heart. Hands down, I truly feel that live music is one of the most full-body, warming moments of anyone’s life. There’s a connection between artist and viewer when you go that gets lost on a CD or iPod. It’s visceral and long lasting, something that’s unique to you even if you go with friends.

Everybody focuses on different moments and nuances by the performers. Nothing beats coming out of a good show – no matter where it’s put on.

If you’ve never been to a weekend festival, please, pencil one in for this upcoming year. I’ve been lucky enough to have gotten to a few in my short little life and I promise you that it has never been the same since. Especially when I was able to go to Lollapalooza in 2008. That first weekend in August gave me more memories than I could ever have asked for – even if I may have gotten the ever-loving crap beat out me. More on that later.

First off, just traveling to another city is an amazing time. Granted, you’re going for music so you may not get to witness the city as much as you like but there are moments when there may be a lull in who you want to see and who is coming up next and you get to walk around Chicago or Indio. Or after the shows and during the night you can enjoy yourself some of the local bar scene. You’ll bond with fellow weekenders and hell, maybe fall in love with that girl or guy you bumped into at the water station.

The beauty of the festival lifestyle is that you are completely immersed in music and see things slowly build and then crescendo into chaos that’s organized and safe. Unless you were at that 2008 Lolla show when Rage Against the Machine performed. I walked away with a concussion and half a shirt despite Rage asking the crowd to stop due to the massive mosh pit that had collapsed around me. That’s the only time I’ve ever been worried at a show like this but that also comes with the territory. The sheer number of people can overwhelm the artists from time to time. Granted, it was a Rage reunion show so if you weren’t concussed, you weren’t living.

Witnessing all of these people, bands & energy, it wakes you up and shines culture right into your eyes. The purity of your reaction to the weekend is priceless. You walk out of there bathing in what just transpired and regardless of whether you’re limping while you walk, you feel something new leaving and that’s what makes festivals worthwhile.

Now, before I begin, I’m not huge on arena shows. I respect and understand their appeal but most of the bands I listen to either break up before they reach this level or just don’t play these kinds of shows. I’m going to go to my first one in New York when I see The Black Keys with The Arctic Monkeys and I wouldn’t even be lying if I said I’m hesitant as equally as I am stoked.

Here’s how I feel: arena shows are hit or miss and that scares me. You’re getting a massive crowd of people, paying a pretty hefty price, all hoping to hear that one single from an artist that gets a lot of airplay on the radio. This can lead to some sour apples around you and nobody enjoys that. However, when an artist has the chance to play in an arena, that also means they’re going to have some money to go into the production of the concert and that’s the sell. You get Lady Gaga/Rihanna shows with elaborate sets and casts of characters and get this brilliant spectacle of performance and sound. Costume changes, marathon dancing, and lasers. What else could you ask for?

The potential downfall is that you may not like that particular show. Most bands deliver but I hear horror stories sometimes so I take each with a grain of salt. I put faith into certain bands, such as Tool, who I know will deliver so I don’t even hesitate. But then when a band like The Black Keys plays a venue like Madison Square Garden, I wonder what this ‘garage-rock’ style band will deliver when I give them 65$. I guess I’ll have to follow up this article with that reaction when the time comes.

Concert halls are a delight for most. You got your moderately priced tickets, usually two openers – one you know and one you probably don’t, and then the ease of drinking and enjoying with no concern for stupid antics. When I refer to concert halls I mean things like Terminal 5 (New York) or The Electric Factory (Philadelphia). The sole purpose of the venue is music and the performing arts. These are the concertgoers that follow artists through cities since the shows are cheap enough and strung together where they can do the drive up the coast or across state so walking you in know that everybody there has one frame of mind – enjoy the music.

I recently saw Chromeo with Mayer Hawthorne at the aforementioned Terminal 5 and holy crap that was fun. Not a single person stood still yet you weren’t bothered by anyone around you. And if they did bump you, since you are all so happy to be there, you are apologized to. Win-win. It’s a powerful thing when a select group of strangers all get chills at the same time and start screaming for me or come together to chant on encores or harmonize with the performers. Mayer Hawthorne likes to take a shot for Instagram each show and nobody yells about him not playing for two minutes while it gets set up and taken because it’s hilarious and enjoyable.

These are your twenty five to forty dollar shows and they’re always worth the price. Get their early enough and you’ll get against the rail in the front of the stage and then you’ll see the sweat and effort that really goes into making the music their playing for you tonight. It’s a stunning moment to witness something you respect so highly to be so tangible.

I couldn’t come up with a name for this type of venue but I’m happy I didn’t to be honest because much like the title, you can’t put your finger on why these shows are so good. Or so bad. Sometimes, you get the perfect crowd, acoustics, and drink specials and then the lead singer’s sick. Or maybe everything’s just so-so. Then there’s the beautiful moment where all is one with the world and your favorite up-and-comers blow your minds for ten dollars.

That happened at the Mercury Lounge (New York) when I saw The Loom perform a late show there after Dry The River put on a relatively decent show. I had never heard River before and didn’t need to after simply because they couldn’t make up their mind about their own sound so I couldn’t either. It went from screamcore to acoustic ballads and yes – range is good, but only when you can hit that range fluidly.

Afterwards, everybody left for some reason and about fifteen of us stayed for The Loom and they delivered us this perfectly crafted heel-stomp sound from Brooklyn that you pray for when you pay ten dollars for a show. They have a French Horn for Pete’s sake!

Beyond the horn though, there was a moment that happened between my group and another team of four. So there was a girl doing interpretive dance to the band. Now The Loom is a band that’s a part of the Western Indie scene if I could sum it up in one phrase. It’s not a band you dance to per se but moreover just kind of be with. This clown that was dancing didn’t get that memo but it led to me looking over at the people to the left and seeing them laughing as well. And we bonded over it. Yes, good on the girl for being free and all but there’s a time and a place. A relatively empty back-bar stage is not a place for your antics.

What I’m getting at is that with each of these shows, you can get that outlier that doesn’t fit in. Whether it’s the entire show or just some hippie at the wrong show, local shows can be distancing or completely arresting with being so intimate.

Shows build relationships. That’s the point I’m trying to make. It’s a night where you and your significant other can bond over a song you both found at the same time randomly or you can meet somebody there that’s wearing the same Leonard Cohen shirt and have a laugh about how ridiculous you two are. There are moments and memories to be had and made when you see anyone play live. Disregarding genre and venue, the sense of truth and soul you get when you see somebody on stage performing in a way they’ll never mimic again is empowering and enlightening. I implore you to support your local scene and head out. Who knows, maybe one of those YouTube videos you keep going to watch cause you love the specific note the singer hits so much can be yours one day.