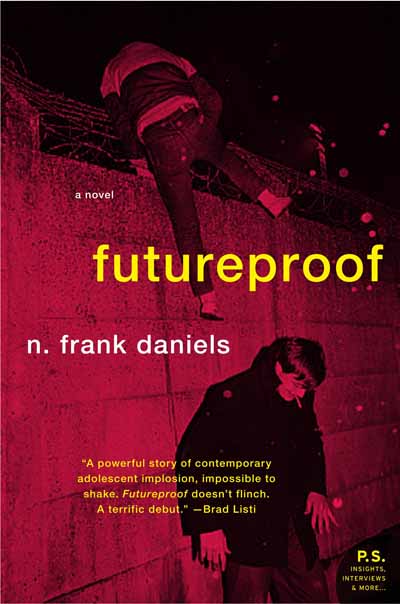 Futureproof is a messy, utterly debauched ride into a 90’s drug-ridden hell. And we’re not talking Baz-Luhrmann-Moulin–Rouge-opulent debauchery. This is grunge flavored—everything is dirty, scummy, gray, wearing ripped black tee shirts and dirty flannel, and sort of feels like a cop-less episode of SVU. In a word: gritty. It’s fast paced, witty, and conversational—the narrator talking you into his messed up adolescent head the whole time, peeling back the layers on all of his self-destructive (and plain-old destructive) thoughts. We start with our little hellion in high school. He’s disaffected, angry, calling “phony” on the world (Oh, Holden, whatever would we disgruntled young adults do without you?) and looking for an outlet from his horrible home life and unsatisfactory school. And we watch as he circles the drain into a 90’s heroin-driven “adulthood.”

I would have loved it in middle school.

Now, though… not so much. It’s entertaining, and gripping in a certain way, that’s for damn sure. And the writing is good—it’s a distinct voice, cutting, and immediate (partly because it’s all written in the present tense), sort of a dude-ish, neo-noir style (read it, you’ll get what I mean. It’s a flinty, cocky, self-assured badassness thing, with frequent slang references to genitals. Sometimes also the word “bro”). But it’s not really my game. There’s only so much adolescent, coming-of-age, raging against the machine in pointless, self-destructive ways that I can find interesting… anymore.

The characters are not people so much as … issue balls. Our boy is more fleshed out, but a) we’re in his head the whole time, b) we see him over multiple years, and c) I have that horrible squelchy gut feeling that he’s based on/is the author (Note: this feeling wouldn’t be half so bad/disturbing/awful if this book were not about drugs, violence, and general life-ruining stuff. But it is).  The other characters—various girlfriends, drug-fiends, dealers, and even his brother—are just mostly the drugs they’re addicted to and the name of the relationship they share with him. That might be on purpose, I dunno. What I do know is that it makes the narrator feel more alone, and isolates the reader with only the narrator to hold on to for sure.

Futureproof is mostly driven by cheap, shiny epiphanies—pretty much all of which either seduce our boy further into drugs and crazytown, or just crumble under the weight of his addiction—and the idea of being “futureproof” (not in a sustainability/responsible management way, but in a living-in-the-now/eternal adolescence/indirectly suicidal behavior to prevent a future/”no future, no future for you” way*). I won’t tell you how the book ends, because that’s just blatantly unethical, but I will say this—there are really only two ways for a book like this to end (and Daniels picked the predictable one), so you can probably figure it out.

In the end, I liked this book fine—it wasn’t really up my alley, but it was an enjoyable quick read. If it sounds like your thing though, go for it. It’s definitely one of the better books I’ve read of this style (and I did have that whole phase in middle school). But personally, I don’t think I’ll read it again, and I’m not going to seek out the sequel.

*This book doesn’t actually have Sex Pistols references (that was me projecting), it subscribes to the Cobain-centric theory of the universe.